Minecraft has been called the computer game equivalent of Lego, but Robocraft more closely resembles my experience of playing with little plastic bricks. Languishing over what components to fit together to create the perfect corner, working out how to fit wheels snugly into chassis sockets, and arranging weapons in the most badass fashion. As a car and sci-fi geek, I was always building spaceships, tanks, and race-cars from my Lego collection, and Robocraft lets you do just that. Better still: after you’ve built it, you can use it to blow up other people’s creations in a multiplayer arena.

Robocraft is split into two very distinct halves: one where you snap together lots of blocks to make a robot. Then, you can drive around and shoot enemies with your creation. The first half is incredibly deep, complex, and will provide you with hours of fiddly joy. The second half is incredibly shallow, simple, and will provide you with five minutes of action whenever you need to earn more money to buy new components. Whilst being broadly fun, Robocraft’s combat is sorely lacking compared to its impressive build phase. 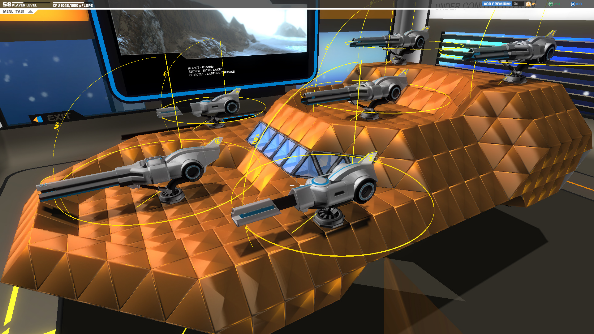 As you progress through the technology tiers, you can upgrade from a mere car with laser turrets bolted on to a soaring helicopter gunship or a striding walker. Your robot’s rank will dictate how many components you can attach before the CPU is ‘overloaded’, but pretty much the only limit is your inventory and imagination. Mountains of components can be easily built up through plenty of multiplayer games, but it’s obvious that injecting a little real cash into this free-to-play game will allow you to assemble your ideal build far faster.

You’ll weather the repetitive combat in order to expand your build options though. In order to build increasingly impressive machines, you’ll need to research and expand the game’s tech tree, which is a spider-web of increasingly amazing opportunity. It’s split into tiers, which are gradually worked through by increasing the ‘load’ of your machine (think of boxers working up through light to heavy weight). Increasing your load requires a higher ranked machine and more components. Reaching each new tier allows you to unlock new sets of technologies, which are purchased with tech points awarded in battle. Unlocking the tech then allows you to buy the components in the in-game store with money earned from battles.

Yes, it’s all a bit complicated. You’re also expected to work out how the system operates on your own, since there’s little guidance to be found. But once you’ve got your head around the multiple currencies and how you can earn them, you can get on building your perfect creation. 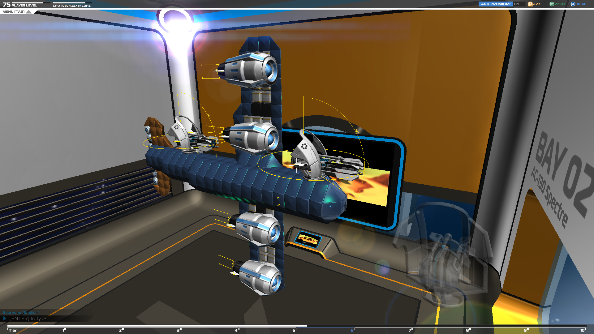 Robocraft’s microtransactions just about escape the ‘pay to win’ trap by being limited by your tech tier. You can only unlock the technology currency by completing multiplayer games, and so no matter how much cash you plough into the store, you won’t be able to buy some of the more devastating weaponry until you’ve earned the tech. And whilst you can then buy as many rail guns as your wallet may allow, you’ll only be able to mount as many as your rank allows (dictated by your victories in combat). Your increasing weight tier will matchmake you with others who have equally powerful machines, regardless of if they worked for the cash or not, making payment there simply for your ease rather than any real tactical advantage.

Players can also opt into a ‘Premium’ subscription that doubles the rate of currency earned during games. Wonderfully, each premium player in a match increases the rest of the players’ rewards by 5%, meaning the more premium players there are, the better the yield for every player.

With a heavy inventory of incredible components, building robots is an absolute joy. Its simple snap-to system makes construction simple, and you can easily spend hours tweaking your design. It’s just a shame that when you come to try them out that the multiplayer is just a little bland. Shooting stuff is great; as your lasers strike enemy vehicles, the blocks will shatter, giving the effect of gradually smashing up a Lego machine. It adds a tactical element too; if you can destroy an enemy’s wheels they’ll be forced to a stand still, or aiming for the weapons will neuter them. But the core objective of the game is to drive across to the enemy base and stand still until it’s captured. The maps are large and full of lanes, and frequently you can make it all the way to the other side without hitting enemy resistance. If no enemies return to base to defend, you can simply stand still for a couple of minutes until the base is captured and it’s game over. There’s parallels to be drawn to World of Tanks in a lot of Robocraft’s elements: they are both games where you shoot at each other’s heavily armoured vehicles. But if you’ve tired of World of Tanks’ ballet of Shermans and hiding in bushes, then Robocraft’s all-out charge at the enemy team may be the change of scene you need. 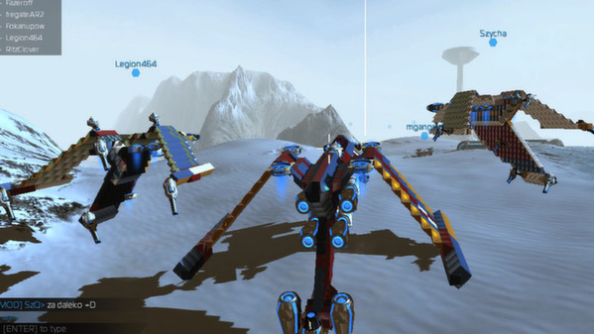 Right now there’s only two maps: a Mars-like barren rock land and a similarly-styled second one capped with snow and ice. They’re basic and serviceable, but lack any form of distinct features to offer any true excitement. Over the next few months of Early Access it’s this that needs to change: a better variety of more feature-filled maps, and ideally a solid line-up of game types that are more than just team deathmatch. The best thing Robocraft could do is introduce a variety of modes that would require you to tailor your robot designs to various different challenges.

Robocraft is a highly entertaining Lego kit and an acceptable arena death match. Despite wearing the ‘early alpha’ badge on its description in Steam, much of Robocraft feels refined and complete. Like the best Early Access games, it has got its core systems locked down, and now it just needs to expand with content. But even without that, there’s no good reason to stop you from downloading Robocraft right now, even if it’s just to experience the joy of transforming a handful of components into a deadly killer truck.