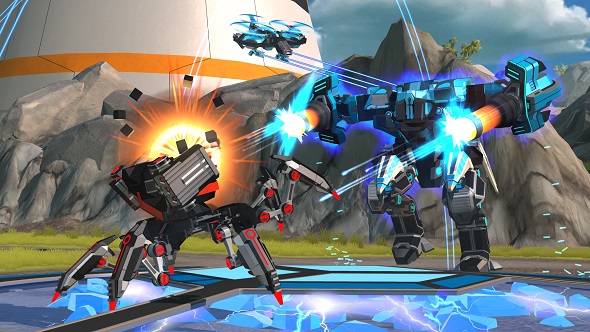 Developers Freejam have removed all forms of loot box from free-to-play robot action battler Robocraft, along with most of the game’s pay-to-win features. This includes all boxes purchasable with real-world currency, and also free daily crates. The developers say this is based on “persistent feedback from the community”.

Check out our list of all the best multiplayer games on PC!

Daily crates will be replaced with daily quests, which players can complete to gain XP and Robits (Robocraft’s in-game currency). The current crate-based progression system, of which the community have not been fans, will be replaced with a Tech Tree similar to the game’s original hex system, in which players earn Tech Points as they level up that can be spent on new skills.

Freejam have detailed all the significant changes they’re making to Robocraft in a blog post. The only microtransactions that will remain in the game are cosmetic items and the Premium benefits system, which is still causing controversy. The developers say that Premium (which allows players to pay to level up faster) will be reduced from 100% to 25% increased speed, but only for new Premium customers.

Many players felt this wasn’t fair, or would create a split between old and new customers. Freejam replied to this on Steam, saying “it’s not a closed book and we’re happy to circle back on it at a later date once the crates are gone if the community still feels the game is too pay-to-win… We’re determined to get to a point where the community feels we are monetising Robocraft in a fair way.”

This announcement is accompanied by the news that Freejam are partnering with publishing giant Tencent to bring Robocraft to China. Freejam CEO Mark Simmons says “Robocraft has already been played by over 13 million players worldwide and we’re very excited to welcome potentially millions more from one of the biggest video game markets on the planet.” The first Chinese beta test will begin on May 9, and you can sign up for it here.