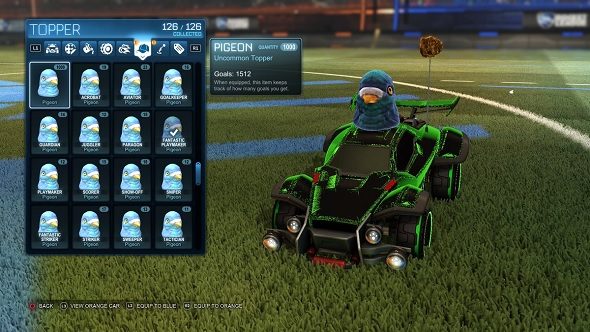 Sometimes, dedication does pay off. After collecting a total of 1000 pigeon car toppers in Rocket League, digital pigeon fancier Johnz12321 has been awarded the illustrious title of ‘The Pigeon Man’ by developer Psyonix.

If indies are your thing, check out our list of the PC’s top 15 indie games.

In Rocket League, car toppers are special cosmetic rewards that players receive from completing online matches. Most of them are based off headwear like top hats and berets, with the occasional silly item like the cake from Portal or a halo appearing in the mix. Eschewing the fezzes and unicorn horns, Johnz decided to collect as many of the pigeon head toppers as was humanly possible. Over many hours playing Rocket League, Johnz amassed 1000 standard pigeon car toppers and sought to proclaim his amazing feat to the rest of the Rocket League world.

Following a post of his avian achievement over on the Rocket League subreddit, one of the developers over at Psyonix popped into the thread, telling Johnz that his pigeon collection would not go without official recognition. Rather than a special golden pigeon car topper, Psyonix awarded Johnz’ services to pigeon collection by giving him the unique title of ‘The Pigeon Man’, to be used when playing Rocket League online.

Psyonix were keen to point out that this special title is a one time event, and that players should not expect titles to be given out to anyone who collects 500, 1000 or even 10,000 of a select item. I’m sorry if you were trying to gain recognition for your vast collection of Rocket League traffic cones, Johnz beat you to the punch.