Nestled away in Rocket League’s Radical Summer season, amid a litany of ‘80s licencing agreements that include Knight Rider, Ghostbusters, Karate Kid, E.T., and Back to the Future (seriously, how much did all of this cost?) is an unassuming new mode called Spike Rush.

The 3v3 scuffle is part of Radical Summer’s second phase, which kicks off today, and it’s revelatory for anyone who, like me, is a touch more minor than premier league when it comes to car football – or any kind of football, for that matter. The game mode will run for three weeks and appropriates the spikes mutator from Rumble, but sets it to ‘always on’ for everybody. That means the ball sticks to your car when it touches you rather than spinning off in whichever direction isn’t goalward, like normal. Right? Anyone…?

Anyway, Psyonix describes the mode as rugby to vanilla Rocket League’s football (or, y’know, soccer, if you must), and the added violence that Spike Rush introduces bears this out convincingly. Once you have the ball, you immediately become a target for every player on the other team, and each of them is in turn targeted by your teammates attempting to defend you. It makes for a thrilling, buffeting ride as the usual arena-scale formations are drawn in to become something a little more up close and personal.

On top of this, if you have possession of the ball you can’t boost, which creates immensely tense moments while you try to set up a shot – or at least get the ball to a teammate – as the gap between you and your three pursuers inevitably closes. Oh, and it’s probably worth mentioning that if any opponents touch you while you’re holding the ball, you explode. A small detail that’s really going to push your insurance premium up.

Despite this potential for unbidden pyrotechnics, intermediate and novice players can enjoy a heightened sense of control early on. Being able to easily keep hold of the ball makes those initial scrambles for it a touch less daunting. However, you’ll still need some modicum of skill when it comes to releasing the ball – which you can do by deactivating the spikes at any time – as you remain responsible for asserting some kind of useful angle and momentum. 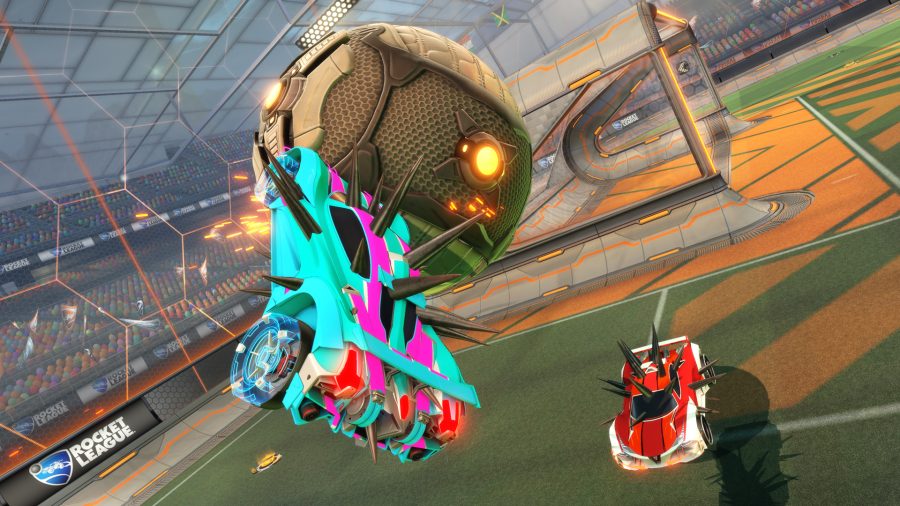 There will be a bunch of cosmetic items to come in this phase, too, including cassette spool, 8-bit, and tron-style wheels, and a bunch of toppers among which feature a digitised pizza, an ‘80s brick-style mobile phone, and a top-loading VHS player (ask your parents). Our favourite, however, is the LL Cool J hat, simply because it’s among the most aerodynamic of the available options.

Psyonix is aiming for a low skill floor but high ceiling with the mode, an ambition well-supported by a demo in which we experience elation, followed by hubristic arrogance, and then panicked fumbles that send the ball wide of target. It didn’t stop us extending the portion of time we set aside to look at everything in Radical Summer in order to have one or three more goes on this rather special twist on the game, though. Practice makes perfect, after all.