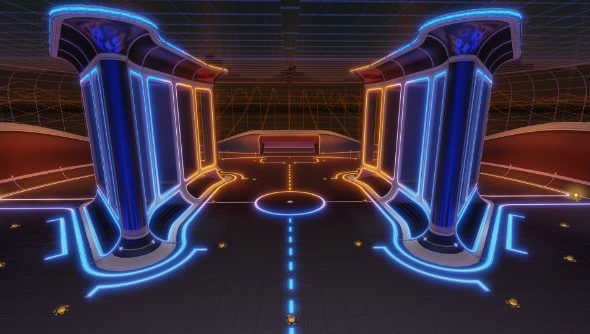 Rocket Labs was added to the car-football game a few months back, giving the developers an easier way to introduce new, experimental maps without having to go all-out on the art.

Taking advantage of a VR aesthetic, this simplified tileset allows the developers to get as creative as they want, with the most popular arenas possibly making their way into the regular playlists and getting a full art overhaul in the future.

Playable in online and offline Exhibition mode by selecting the Rocket Labs playlist, Pillars will join the rotation some time in June.

The new map splits the arena into three lanes, opening the middle up for rebound shots and letting players dribble away down the sides, playing hide-and-seek with the opposition and making them second-guess your intentions. It looks like a lot of fun.

We’ll update once we have a solid date.