Rodina has been around for quite a while, squirreled away in Steam’s Early Access folder, hoovering up incremental updates like a hungry piglet.

It’s an open-world space explorer in which you fly around a procedurally generated solar system collecting gadgets that allow you to visit and explore planets with ever more hostile environments, seamlessly ascending from surface to orbit and beyond.

You can walk around inside your ship too, pressing buttons, using computers and putting out fires, and all without loading screens. It’s like an extremely pared down No Man’s Sky, except better, because you can play it right now.

Rodina is nowhere near finished. Right now it’s a bunch of disparate features half-cobbled together in an impressive cosmological engine. Your ship is a strange, textureless mess of polygons. Planets are vast, geographically varied but lifeless things. Enemies sort of swarm about the place, but you can go around them or turn them off entirely. They don’t really serve a purpose, but that’s fine, Rodina is pleasant enough as a sandbox.

You start out in Rodina perched on an asteroid in space. You can hit tab to instantly switch to a first-person view inside your ship, scurrying about its various rooms, or jumping out of the airlock and into the low-gravity vacuum of the rock’s undulating surface. Hop into the pilot seat and you can use your ship’s tiny docking thrusters to gently lift off and begin floating away, higher and higher until the asteroid’s mountainous horizon bends around to meet itself, the entire rock eventually becoming visible in front of you. 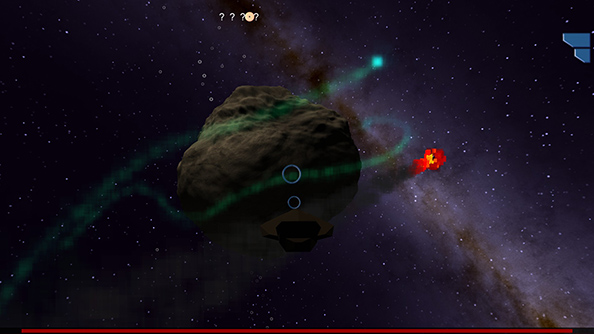 The game then, with dramatic timing, highlights hundreds of other nearby asteroids, pinpointing them in the sky with as many small round icons. You can shift up gears by holding down your ship’s clutch and jamming the W key, much as you would if your actual car had a “let’s go into space” gear.

Higher gears allow you to blast away from your starting location, at much faster speeds than your docking thrusters are capable of, towards another asteroid. You can then land on that one too, slowing yourself by shifting down gears again, gradually descending while using your docking thrusters to make minute adjustments, and then hopping out for a wander. The scale of speed, that ability to go from inches per second to millions of miles per hour depending on your gear, is a clue to the sort of physical scales Rodina will have you traversing.

Bouncing from asteroid to asteroid you eventually discover and unlock the ship’s uppermost gear, the limnal drive, which had presumably fallen off at some point prior to you starting the game. This faster than light drive allows you to explore the deeper solar system. Fresh question marks in the night sky entice you towards them like big sexy space sirens. These aren’t piddling space rocks but huge planets with wispy atmospheres, appearing as distant pinpricks at first, like the asteroids, but then growing larger and filling your screen with their huge spherical planet-y mass. No loading screens. Everything feels like it lives in the same space. 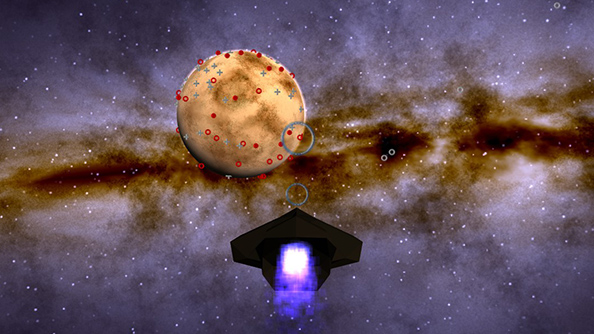 To land on these you have to scorch through the sky like a blazing hot meteor, buffeted by winds and fire as your speed is violently arrested. You must fire your thrusters towards the planet to prevent yourself skipping off the thick atmosphere like a pebble on a lake, while also avoiding plunging downwards at too steep an angle and burning your ship to a charred husk. The camera is rocked around wildly during atmospheric entry, jostling your controls and making it difficult to point your ship in a direction that won’t make it ignite. The music becomes rousing and dangerous as the planet’s features become more distinct and the horizon flattens out. 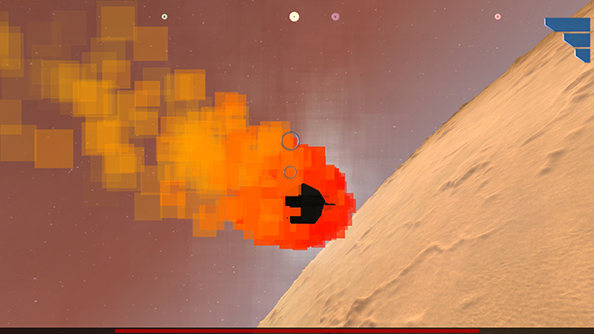 Once you pierce the atmosphere the music mellows out again, reverting to ethereal science-fiction orchestras. The pixel-wide geographical features you could see from orbit become vast canyons and mountain ranges. What looked like rippling sand dunes from space are instead vast dipped planes that are hundreds of miles wide.

You can use your cruise engines to pootle about inside the planet’s atmosphere, following small on-screen icons that denote a spot where items can be found. These items are typically datalogs (there are volumes upon volumes of fiction writing here, too much to read in fact), ammunition for your ship, and sometimes an upgrade that will allow you to visit other worlds that are otherwise too acidic or frigid to land on. 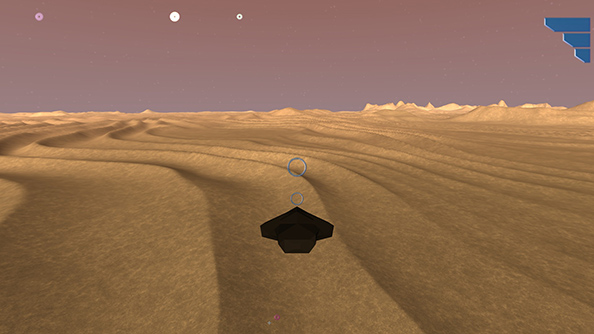 When it happens, combat is rudimentary and not much fun. Enemies are tough and the controls are washy, your mouse will overshoot and swoosh past its target as you’re firing. Your most powerful thruster will only fire in the direction the camera is facing too, so complex dogfighting isn’t really a thing. This is one of least developed components of Rodina, so it makes sense that there’s an option to turn off combat altogether.

Enemy ships in orbit above planets are easily avoided, but you’ll often face opposition when they’re hanging out around the items you’re hunting. Destroying enemies inside the atmosphere has the neat side-effect of leaving their burning wreckages dotted across the landscape, plumes of smoke marking their demise. 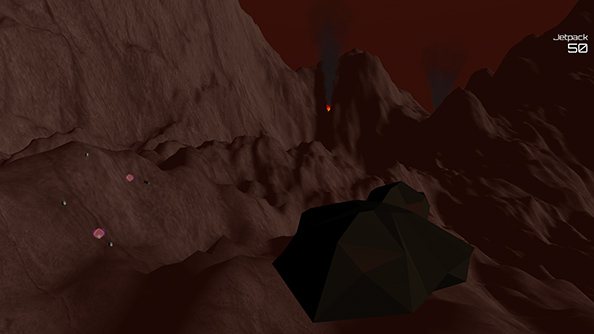 Getting into scrapes or really messing up an atmospheric entry can also cause fires to start inside your ship, fires that will spread and eventually destroy everything you hold dear. There are a couple of ways to deal with fires. The first is to jump out of the pilot’s seat, grab a fire extinguisher from the wall and start tackling the blaze in first-person like an interstellar fireman. 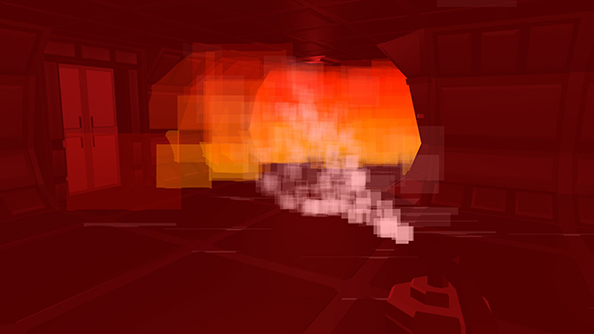 This is rather difficult, as fire has the obvious effect of burning you alongside your precious ship. Once out of control, the fire will be spreading faster than you can extinguish it too. This is where the most recent feature addition comes into play. Rodina 1.1.3 allows you to blow the airlock and rapidly depressurise your ship, opening all doors and starving the fire of oxygen, FTL-style. 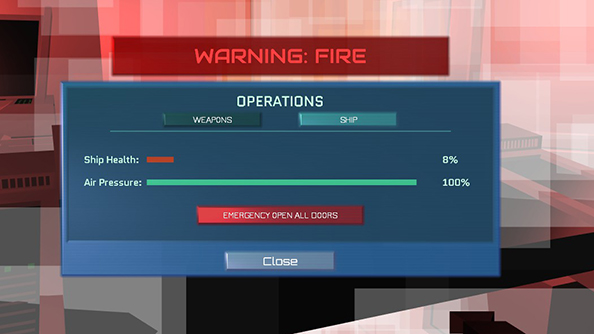 A drastic last measure, opening your airlock has the additional effect of blasting you out of your own ship’s back door and out into space, which is something that needs to happen way more often in games. 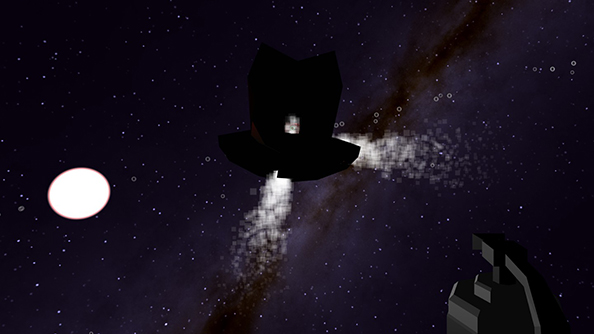 If you’re still holding your fire extinguisher. You can use it as a makeshift jetpack to haphazardly propel yourself back into your own airlock, returning to the safety of your now airless ship. From there you can shut the doors, repressurise the cabins and enjoy a fire-free environment. The ship repairs itself over time, which is useful.

That’s really quite cool. But that’s almost everything Rodina does at the moment. I honestly couldn’t recommend it to somebody looking for a space adventure because there are giant chunks of the game still yet to be developed, and what’s here is fairly clunky, all stinking of debugging and physics glitches. The roadmap for its ongoing development is ambitious too, and progress is slow. I can’t see Rodina reaching any definition of “complete” for a long time.

But if you’re in this for the scenery, Rodina has lots of show you. Technically, the game’s astounding ability to tie the entirety of its solar system into one cohesive and loading screen free space — that you’re able to go from walking around meter-tall details on a planet’s surface to slingshotting around a star at several times the speed of light — is masterful and enchanting trickery. The game’s dynamic soundtrack is surprisingly good too, lending Rodina’s unique brand of lonely space exploration its own haunting personality. 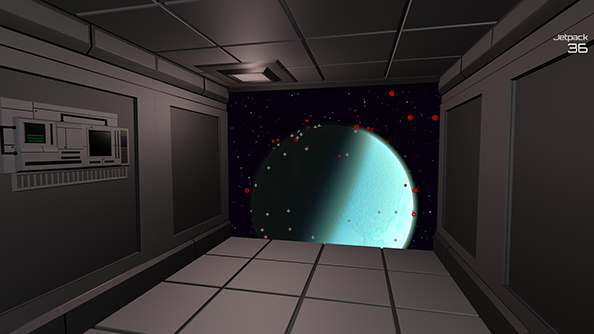 And that you’re able to walk around inside your ship, open your airlock door and peer out into a universe — one that’s not a static backdrop but a place you can, in just a few seconds, be flying through again — that’s something I haven’t experienced in any other game. A very odd sensation that puts in me in mind of what sitting in the doorway of the TARDIS must feel like, legs dangling in space, surrounded by immense cosmological beauty but just inches from a perilous fall.

All that from an unfinished half-game.