Roll up! It’s Transformers Universe, the game about transforming robots who just cannot stop fighting. On one side you’ve got the friendly Autobots, while on the other you’ve got the despicable Decepticons. You can tell they’re evil because they’ve got the sinister sounding synonyms “deception” and “con” in their name.

Sure, when the Autobots transform we’re all “haha, look at this cool Autobot, he’s a truck now, brilliant”, but show us a Decepticon in vehicle form and we’re all “I can’t believe this cheeky Decepticon, trying to pull the wool over our eyes. We know you’re not a jet plane so just stop it, okay? Stop it.”

Transformers Universe is being developed by Jagex, they of Runescape fame, and will be a free to play, browser based, “massively online tactical action game” launching this summer. There’s no RPG style character creator. Instead you’ll play as the bodyless commander of a team of robots, able to choose from one of many pre-designed characters before taking them into battle against other players. As you fight and win you’ll unlock new bots with different specialisations, all of which can be customised with new paint jobs, weapons and equipment. 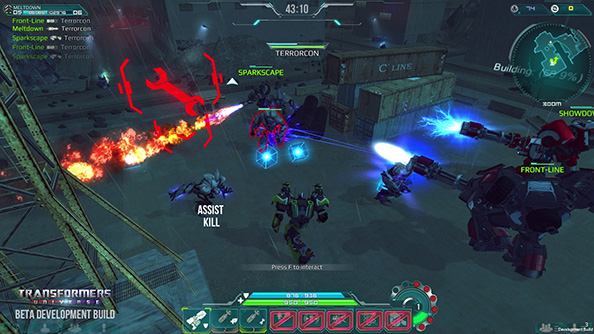 Transformers are able to morph (or ‘transform’) into cars, typically a sort of driveable (and strictly land-based for now) vehicle that complements their abilities. The sniper character for example transforms into a nimble Baja buggy, while the tank character folds into a beefy monster truck. In vehicle form you’re much speedier, capable of traversing distances more quickly along tarmac roads, but you’re naturally more vulnerable to having your mechanical guts all punched out.

Combat takes place in arenas, with teams combining their bots’ abilities to great effect. Healers scuttle after their more offensively tuned teammates, who in turn funnel enemies through narrow lanes. Area of effect attacks and healing runes make positioning a big deal in Transformers Universe, while a basic targeting mechanic moves the game away from twitch shooter territory and into a more tactically minded affair. Accuracy isn’t king here, but teamplay is important. 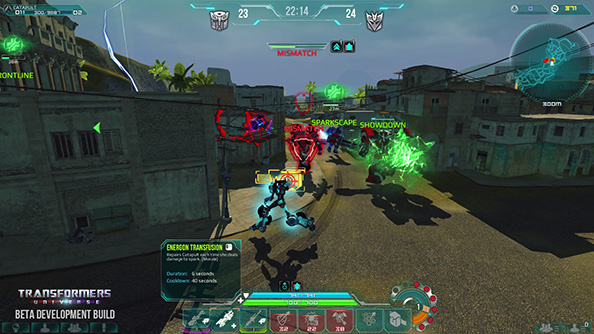 Progression comes in the form of levelling your individual heroes, as well as a rewards system that gifts new equipment and bots to victorious players. Jagex promise Transformers Universe will not be pay to win, but that it will be possible to purchase new bots more quickly by handing over your credit card details. And for the PvP averse there are feral, AI-controlled robots waiting to be smashed to bits in the overworld: zombified Terrorcons who’ll act as stand-in antagonists until you can find some real people to grapple with.

So, not quite the RPG many were probably hoping for, Transformers Universe has instead turned out to be more of a combat-focused arena-scrapper, a PvP centric collect ‘em up where the bots are to be thought of as MOBA style heroes rather than personal metallic avatars. The closed beta is where the depth of the game’s strategy can be properly explored, but while Jagex’s hands-off presentation showed a tactical game with plenty of flair, first impressions are of a browser game that’s limited in its ambition: air vehicles are notable by their absence, the Transformers themselves look teensy, like plastic toys stomping around a Legoland village, and landscapes are Unity-engine generated splodges of smoothed out hills and valleys.

Transformers Universe is not an exceptionally pretty game, but it may not matter if Jagex can deliver on the breadth of tactical options promised by their roster of new bots, each with swappable, customisable weapons bits and equipment bobs. The permutations of fighter, and how they supplement other players in PvP, could give way for real tactical diversity. The game launches in browser windows this summer.