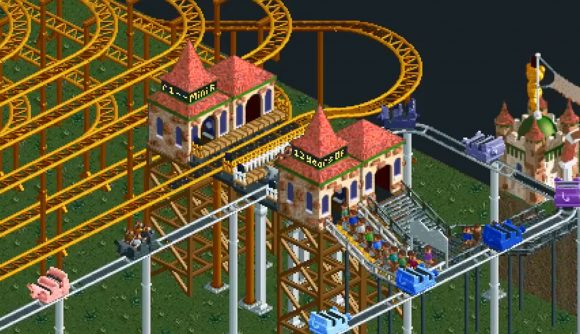 You can build some ridiculous rides in RollerCoaster Tycoon, including many that show callous disregard for the health and safety of your patrons. But a project called 12 Years of Suffering inflicts over 30 million days of roller coaster ‘fun’ on parkgoers, which translates to over 12 real-world years on the tracks.

This was built in OpenRCT2 by Marcel Vos, whose YouTube channel hosts all sorts of crazy experiments in the game. There are two separate coasters on the map. One is a giant ride that takes up nearly the entire landscape, with a single cart that makes 20 laps. The other is 12 Years of Suffering itself – a tiny circuit with 30 carts all in a row.

The two tracks are synchronised so that each cart one 12 Years of Suffering only releases once all 20 circuits on the big track are complete. That means digital parkgoers are locked in absolute boredom on a miniscule track as they wait for the in-game years it takes for the big track to finish. Only once all the carts have waited out the synchronised start with the big track do you finally get off the ride.

You can find much more detail on the process in the video itself, which was brought to our attention by Matthew Reynolds on Twitter.

Yes, the project is now several weeks old, but look at it this way – you’d only be a tiny percentage of the way through those titular 12 years of suffering if you’d started back then, so no real time lost.

Related: Get into more of the best building games on PC

The comments under that video are full of suggestions for how to make the ride even longer, and it seems that Vos has picked up some workable ideas. Those poor thrillseekers may never get back home.