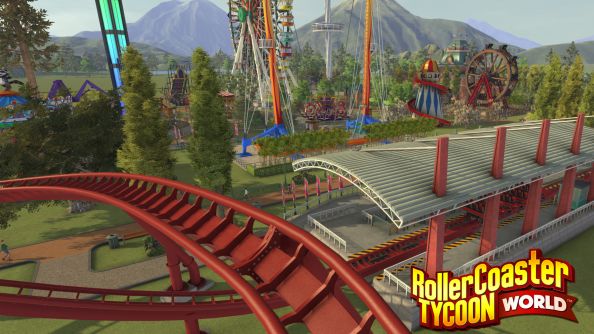 RollerCoaster Tycoon World has endured a tumultuous journey from mobile to PC. There’s been upward struggle, sudden changes in direction, and candyfloss everywhere. Now comes a sickening pause, just as developers Nvizzio crest the hill before release. Atari have pushed the series reboot back, out of December and into early next year.

A recent beta weekend for the game’s coaster builder brought spirited feedback to the Atari forums, and the publishers have since been thinking about “all the other ways we could push the franchise forward with some additional time”.

That coaster builder needs some attention, for starters – testers have asked for easier-to-use gridding, a robust fencing tool, and the option of simpler, predefined pieces. Beyond that, Atari plan to fix the various bugs and memory leaks that rose to the top during the beta.

“Our highest priority has always been to release a game that we’re proud of, one that lives up to the lofty standards set by the previous titles,” said Atari. “With this new timing we will be able to do just that – deliver a robust tycoon experience along with additional layers of polishing and tweaks that the extra time affords us.”

A second beta weekend will come in December, ahead of eventual release on an as-yet-unspecified date after Christmas.

A year ago, Atari transferred development of the project from Pipeworks Software to then-new studio Area 52 Games, whose staff had worked on Tropico, The Sims and Railroad Tycoon. Last we heard, they were overhauling the game’s graphics after a lacklustre-looking RollerCoaster Tycoon World trailer. But now the sim appears to be in the hands of a third outfit, Nvizzio. Think you’ll hop on their ride once it finally comes to a halt? Or give Frontier’sPlanet Coaster a go instead?