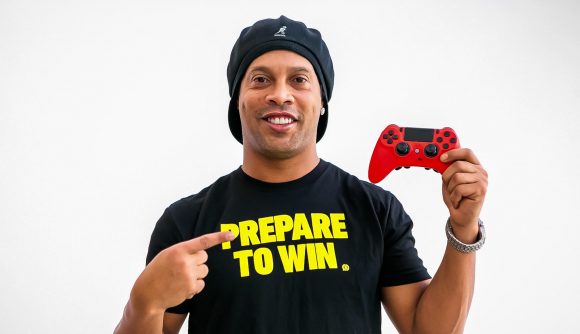 Ronaldo de Assís Moreira, better known as Ronaldinho, is an ex-Brazilian international soccer player – and one of the most popular footballers alive. Now he’s looking to get into another field entirely – that of most popular esports. The Ronaldinho esports club is being put together now, and has the backing of controller manufacturer SCUF.

As reported by our sister site The Loadout, the former international football star is the “official brand ambassador” of SCUF Gaming – who apparently want to “inspire the next generation of competitive gamers, replicating the effect the Brazilian had on football in the world of gaming.” The way to do that? With SCUF controllers, of course – “the most cutting-edge equipment available.”

Ronaldinho is reportedly in the process of searching for the best talent in the Brazilian esports scene to join his new club, which will be called ‘R10’. As of yet neither Ronaldinho nor SCUF Gaming has revealed exactly what games the club will be competing in – although it’s a safe bet to assume it’s a football game, such as FIFA 20 or the latest PES.

The announcement is rather light on details about the actual esports side, with Ronaldinho’s tweet mostly being about SCUF controllers – with the attached video not mentioning esports or the club at all.

To perform on the pitch, I relied on the best boots. In the game, I need a SCUF controller to win.@ScufGaming & @SCUFDunc is the ultimate gaming partner for me 🤙🏽🎮https://t.co/58cE1U4YS0

As The Loadout reminds us, isn’t the first footballer to launch an esports brand of their own. Leicester City’s Premier League winner Christian Fuchs set up his own esports team in 2018 – with the excellent title of ‘No Fuchs Given’.

Arsenal players Mesut Ozil and Bernd Leno, along with former Netherlands international Ruud Gullit, also have their own esports clubs.