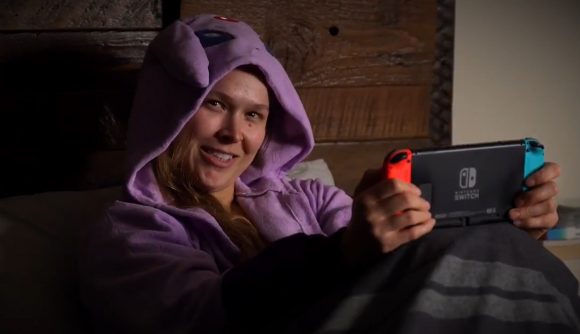 Ronda Rousey, of mixed martial arts and professional wrestling renown, is now after a different sort of fame – game streaming. Rousey’s first stream will begin next week, and all the proceeds from that stream will benefit Australian bushfire support charities. While Rousey’s certainly got the history of poor, publicly-stated opinions that would qualify her as a top streamer, at least we’ve got some charitable benefits from it all.

Rousey’s first stream will begin Tuesday, February 18 at 15:00 PST / 18:00 EST / 23:00 GMT on (obviously) Facebook, where she’ll be playing the latest Pokémon game. The announcement video suggests streams will continue weekly from there, but the exact plan is unclear. “Game streaming is one of the rawest and most authentic mediums,” Rousey says on social media, “and the time is right for me to jump into the stream exclusively on Facebook Gaming with the #RowdyOnes.”

In a separate press release, Rousey says “in recent years, games have been a great way for me to keep my mind active when my body is too sore or tired to move.”

I don’t know what to do with the rest of this quote except share it, because it needs to be seen by the world. “One of my favorite gaming memories happened when I was 11 years old, and encountered an Articuno on Pokemon Blue for the first time. I was awestruck and thought she looked like an angel. Looking back at that same image now, I’m amazed how powerful our imaginations can be and how gaming encourages us to imagine what our reality could be instead of just accepting it for what it is – a skill that has helped me in my fighting and entertainment careers countless times.”

Game streaming is one of the most authentic mediums,& the time is right for me to jump into the stream exclusively on FacebookGaming. My first stream is on Feb18th at 3pmPST–100% of proceeds from the first stream go to Australian bushfire recovery effortshttps://t.co/O9QlM8KkaK pic.twitter.com/pAHMWvhEkU

Let’s get Rousey hooked up with the Temtem list so she can have a fresh ‘angelic’ experience and convert to PC gaming. Gotta have your ultra-high refresh rate monster-catching, after all.