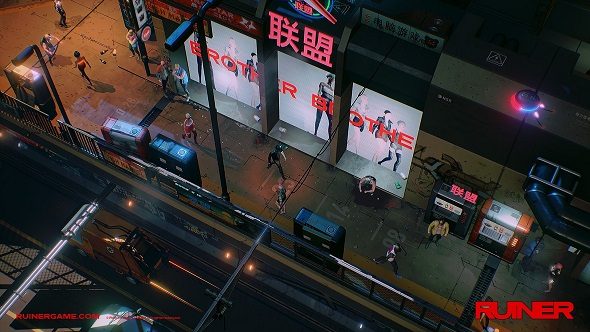 What happens when you take Hotline Miami, Transistor, a splash of cyberpunk, and push it through the working hands of an indie developer? That’s right – you get Ruiner. It’s a top-down shooter where you’ll smash through gangs and The Man to the soft encouragement of a woman whispering in your ear. You’ll also be getting it pretty soon: September 26.

To mark the release date announcement, there’s a new trailer which you can watch above. It shows off a bunch of the weapons, plus some of the combat – which is where the Hotline Miami and Transistor influences come into play.

It’s then coated with a cyberpunk finish, plus some bassy EDM throughout. Despite the fact that we’ve not seen a huge amount of the gameplay, I’m pretty into it – visually, at least, it looks phenomenal.

There’s also a comic on the website in case that’s also your jam, plus loads of images and GIFs to feast your eyes on. I don’t think there’s been a better game to ogle as you wait until its release.