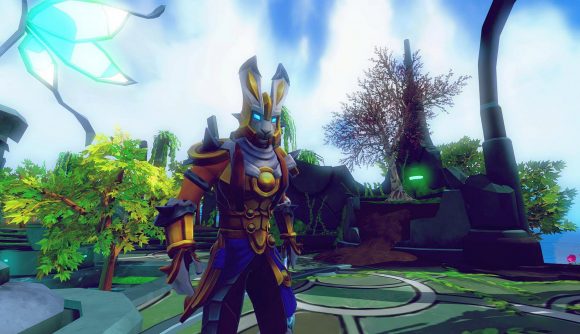 Runescape Mobile is out now in early access, developer Jagex has announced. The game, which features cross-play with the desktop version, is available to download now from the Google Play Store. An iOS version has not been announced, however.

Jagex promises the mobile version is the complete desktop edition, except with an “entirely new user interface that’s custom designed for touchscreen devices”, which includes both smartphones and tablets. Additionally, anyone who downloads the game while it’s in this early access phase will receive an exclusive founder’s pack. This includes a Steel Panther combat set, a unique rest animation, and the Radiant Dawn armour.

Alongside the new UI, Jagex says it has tailored combat mechanics “specifically for mobile players” and changed how first-time players are introduced to the game. Finally, the developer says “the graphical clarity on the menus, icons, text, and textures have all been improved.”

It’s important to note that, while the download is free, you’ll still need a Runescape membership to play the game on any platform. A membership costs £7 / $11 per month or £63 / $100 per year. There’s been no word on when the mobile port is expected to exit early access; PCGamesN has contacted Jagex to clarify.

Alternatively, Old School Runescape, which launched on iOS and Android almost exactly a year ago, is free-to-play. The Old School variant is based on Runescape as it was in 2007, as opposed to the newly released Runescape Mobile, which mirrors the up-to-date desktop game.