My own real life penis comes in a startling array of different sizes. On some days, if the barometric pressure is right and I haven’t stepped in any puddles, one might remark that it’s a perfectly ordinary looking penis. It’s the sort of penis you’d get if you averaged out all of the penises in the country. What I’m saying is you’d really struggle to pick my penis out of a line-up, if it had commited a crime.

If I’ve been for a swim or a run or I’ve been doing a difficult crossword however, my penis retracts right up inside my abdomen and tickles the bottom of my lungs, or sits defiantly atop my balls like a glossy pink grape, a capricious little sultan on his cushioned nut-throne.

Those are just two of the many, many different sizes of my penis that I am willing to tell you about. But now I’ve got a new size of penis that I have to deal with. The size of my Rust penis, which has been assigned to me at random by the game and cannot ever be changed, not even by standing in the ocean for fifteen seconds.

Here’s the story of how I came to learn of the size of my Rust penis.

(This article contains mention and pictures of many penises.) 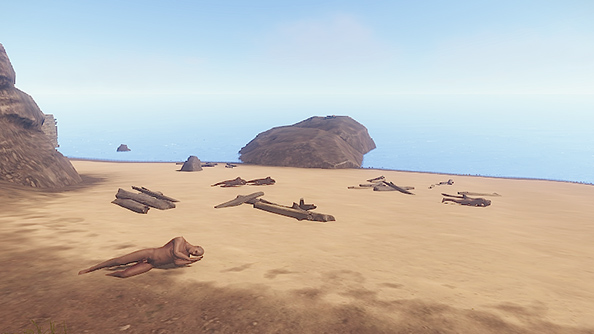 The first thing I see when I start playing Rust is a sun-drenched beach strewn with the bodies of completely naked men. These are all inactive players who’ve spawned here on the coast, and resting among the driftwood they look to me like ghostly beached mermen, each one a stunning vision of masculine beauty. Their chests move slightly as they take their sleepy nude breaths, proving that they’re only resting, and not dead, which would have made what I’m about to do weird. 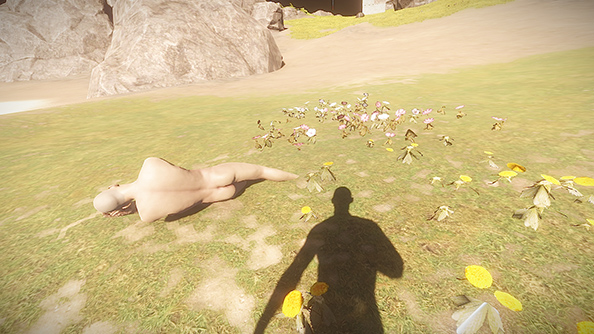 Immediately I set about checking all of their penises to see if the latest game update has taken effect. The update promised to assign random penis sizes to all of Rust’s players, though I’m disappointed to find that they all appear to be the same length on this beach. I also haven’t yet figured out which key allows me to peer down at my own schlong, but I can deduce that mine too is this default, standardised size, and that the update has not yet been applied to the main game.

Just to be sure, I check the penises of five more sleeping players. 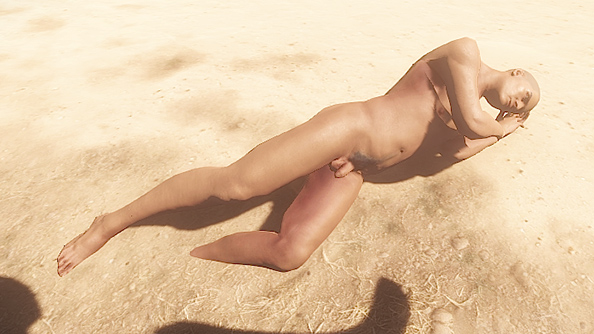 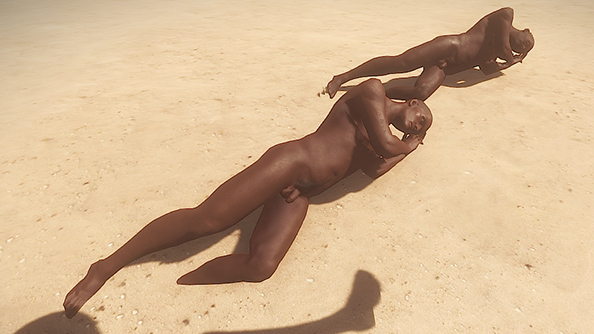 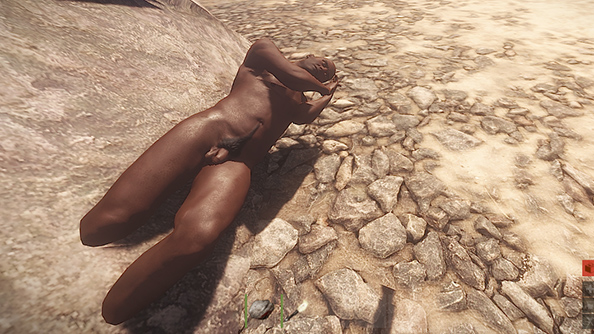 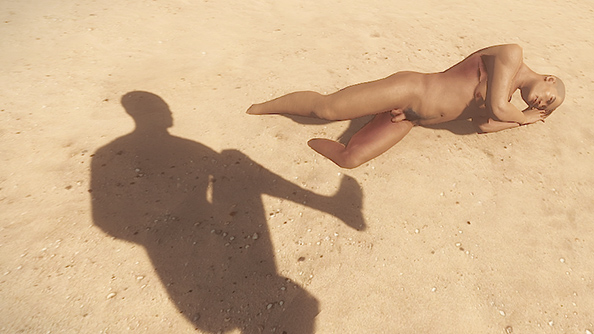 Like meaty snowflakes, no two real-life penises are alike, but in this version of Rust they are all eerily and upsettingly identical. The update, I eventually conclude, must have only been applied to the development server, the magical island on which experimental new features are tried and tested before being deployed to the rest of the game. If I can find my way there, the beautiful breadth of manhood would be mine to witness.

So I move to a new server just as night falls, using my torch to light the snoozing dongs that are scattered all around me. The naked men dot the vanilla white sand like cookie dough and chocolate chip, and I methodically check all of their penises and balls, searching for the slightest disparity. Are these ones different sizes? It’s becoming difficult to tell, and I’m starting to wonder if I’ll ever see an oddly sized penis again. 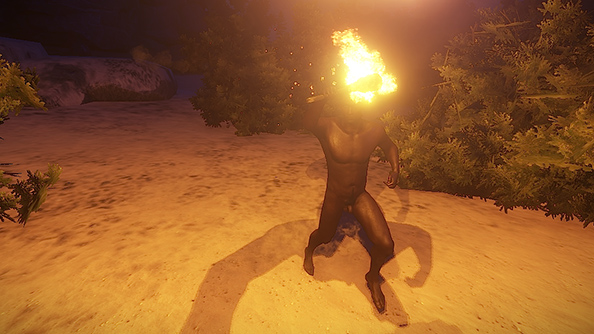 Out of the darkness I see an animated, living penis prance all up on me as another torch wielding player stumbles out of the bushes, but before I can get a good look he’s gone again, bolting into the foliage like a startled cat, jumping and twirling as he disappears out of view. Was that one bigger than the others I had seen?

Perhaps I’m going mad out here. I start to demand that other players on the server tell me about the size of their penis, but my desperate pleas are ignored. 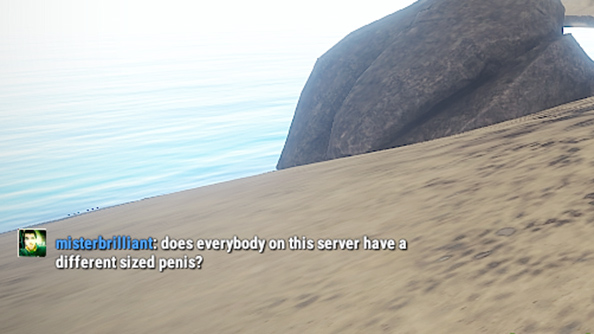 And what of my own penis? I still couldn’t figure out how to look directly at it, so instead I resort to investigating my own shadow for some indication of length or girth. But I find nothing. “This is bullshit,” I say to myself as I stare angrily at where my dick and balls should be. There’s nothing there. No legs. No feet. Just sand and air. 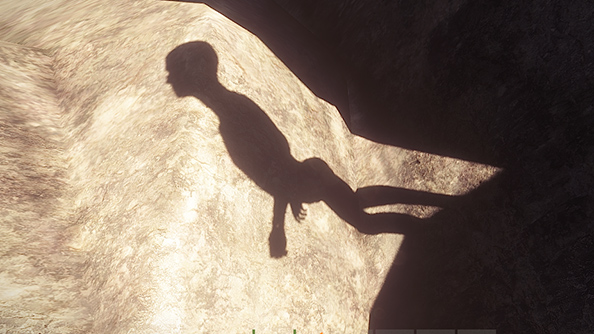 But there’s something alluring about each naked beached body I find. It would take only one penis, large or small, to prove that genital variety now exists in Rust. Darting from nude man to nude man feels like a captivating lottery of dicks, with each little disappointment offset by the hopeful optimism of spying yet another naked man just a little farther along the coast. His penis might be the one I’m after, the piece of the puzzle that I’m missing.

The answer, I tell myself, is just around the corner. So I press on. I look at dozens and dozens of similar penises until I feel like I’m about to burst with frustration. 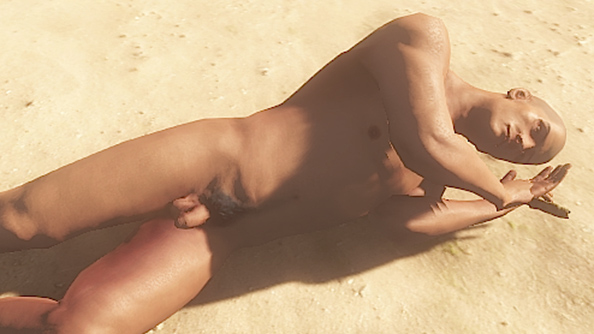 And then I finally found one. 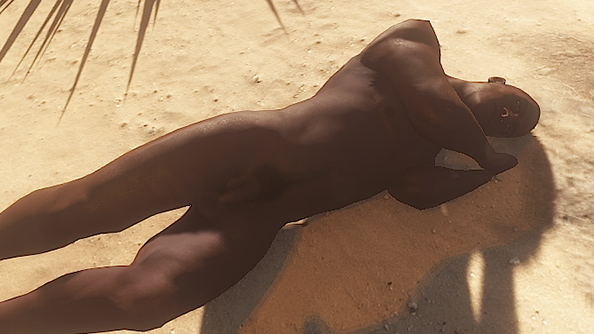 It’s bigger than the others.

And then immediately afterwards I found this one, which is definitely smaller, but stunningly lit. 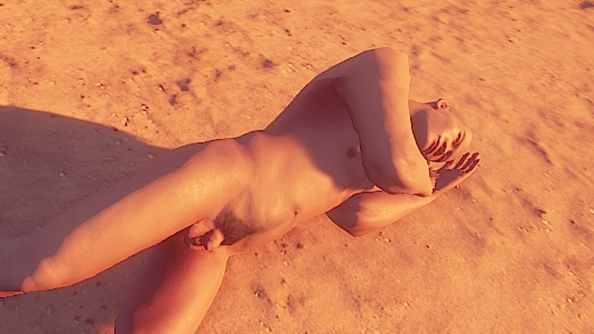 With irrefutable proof that I was living in a version of Rust that contained varied penises, I could finally take the bold step of turning the mirror on myself and seeing what manner of junk I had in my trunk. Not that it matters of course. All penises are special, whether they’re large or small, fat or thin, or make a high-pitched whistling sound if you spin them around. A helpful player advised that I hit the Tab key in order to see my character in third-person. This was it. 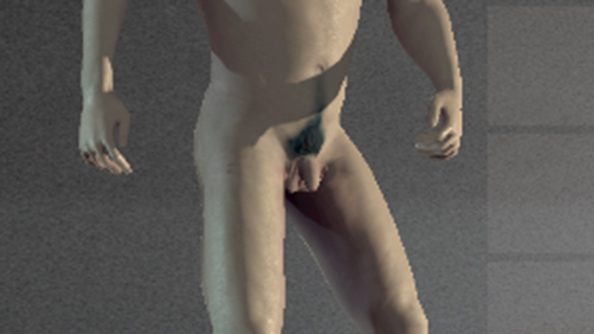 I love my weird penis and will fight anyone who doesn’t.