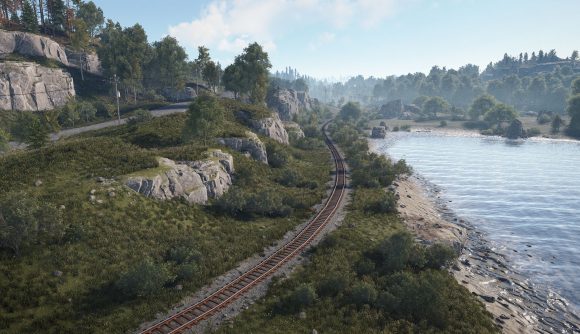 A Rust rail network is coming, and the first iteration of it lands as part of the April update. This month’s update also introduces powerline ziplines to make it easier to get around the map, new achievements to earn, further improvements to lighting on monuments, and more.

Rust’s monthly update arrives on April 7 at 11am PDT / 2pm EDT / 7pm BST. Further details will hit the official site at the same time, but for now, the devs have provided a press release with early info on the big features. The biggest is the new procedural rail network. As of this update, “Any map size 4250 or larger should have a single railway in the shape of a ring going around the entire island. This is just a tech test / proof of concept for now, so there’s no official gameplay element to it yet. Please report any weird looking areas you might encounter. In the near future, you can expect drivable above-ground trains.”

You’ll also find new platforms and ziplines atop certain powerlines on procedurally generated maps. These will let you quickly travel along the powerline chain, or to connected monuments.

The monument lighting update provides some extra visual love to the lighthouse, fishing villages, stables, excavator, and the arctic research base. The devs say the airfield is the real star, however. “Here we have added not only new lights and darkening volumes, but also tweaked some materials and added a lot of new prop dressing to bring it to the same level of quality as our newer monuments.”

The devs are also continuing to test Steam Networking features, which should – eventually – offer improved performance, though they’re still disabled by default right now. “In the medium term,” the devs say, “we hope to switch all servers to Steam Networking by default.”