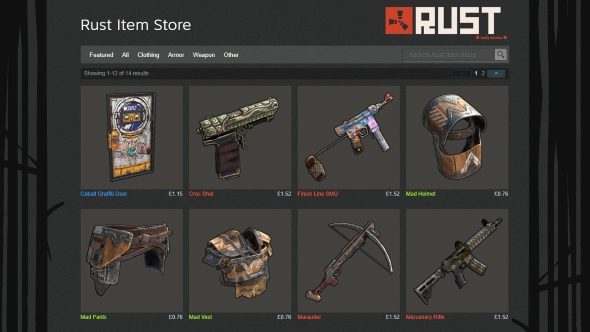 Sometimes, you’ve just got to pay it forward. Rust – the survival FPS from Garry’s Mod creator Facepunch – is still consistently one of the top ten most played games on Steam. Following in Valve’s footsteps, Rust allows creators to upload alternate skins for items and weapons to the Steam Workshop to be voted on, with the most popular being added to the game as premium cosmetic upgrades.

Yesterday on Twitter, Facepunch head honcho Garry Newman – himself a rags-to riches-success on the back of the enduring success of Garry’s Mod – announced that Facepunch had now paid out over a million US dollars to skin creators since the system went live in the July of 2015.

Rust is one of our top candidates for the Best Survival Sandbox crown. What’s your favourite?

Dunno if I already posted, but we’ve paid out over $1m to Rust’s skin authors now

While we can’t confirm the figure for ourselves, among the replies to the tweet are several skin-creators with nothing but glowing praise and thanks for the financial support the game has brought them.

You and the other devs and ofcourse the community have offered me a massive, huge and enormous financial kickstart with this in both my education and hobby, Thanks for that!

We’re super grateful for the opportunity! I have you guys to thank for my car, setup, and also a big start to my portfolio. Thank you! ❤️

Paid the medical bills for the birth of my son and then for a much needed trip to Vegas!

It’s interesting to see that in an industry so dominated by massive publishers with an absolute stake in the fate of their owned studios, a relatively small independent studio like Facepunch using its platform to promote and pay small-time creators, even if they are taking a cut of the takings.

Rust isn’t the only game to have taken up this system by a long shot. Digital Extremes’ space-ninja shooter Warframe has its own range of ‘Tennogen’ user-made cosmetic items, sold directly for cash, and picked via the same democratic Workshop filtering system.

Valve themselves were the first to pioneer this system, so far as I’m aware, with their Team Fortress 2 patches (such as the recent Jungle Inferno patch) each including a bundle of community-created themed content, including whole maps, which creators can be tipped for by buying the corresponding Map Stamp.

These are unstable and unpredictable times for many studios, but it’s nice to see that independent asset creation has become a growth field. So long as the original creators are the ones to walk away with the lion’s share of the takings, I’m more than happy to see this happen.