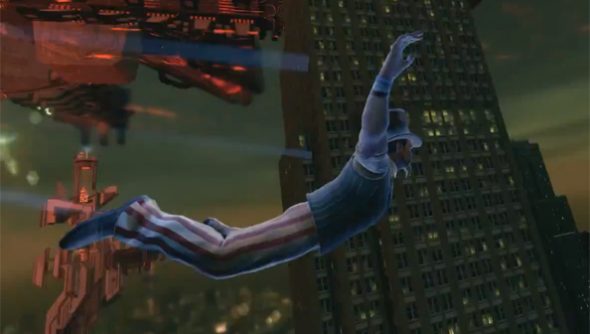 While playing Saints Row for the story is like going to a restaurant for the looped dinner music, you may be interested in gleaning what you can from the recently published achievements list for the game. For instance, “There is no Pancakes: Completed ‘A Pleasant Day’ and ruined your first virtual prison” tells us that we’ll be returning to prison for the first time since the second game – possibly the same prison, allowing for some nice callbacks on Volition’s part.

More interestingly the game will reward you for conforming.

The list was discovered by Exophase. It’s full of the general sort of accomplishment, like rewarding you for time spent in the game and other endurance targets (time spent in the air, distance travelled, etc).

The achievements which stand out are the ones related to the virtual vs real world setting of the game. If you’ve read Steve’s preview of the game you’ll know that, following an alien invasion, humanity has been enslaved and plugged into a Matrix-like virtual world, within which you’ve access to super powers. The nugget of detail revealed through the achievements is that you’ll have the option to submit to the simulation and accept it as the real world. Plus, you’ll be rewarded for that choice with an achievement. You aren’t rewarded for escaping the fake world.

The only feature revealed through the achievements is that you can customise your weapons’ appearance – “Better this way: Customized the style of all the weapons on your radial and hit the Simulation with style.”