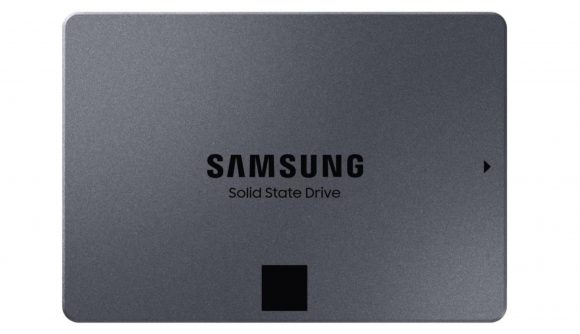 The Samsung drive features either 1TB, 2TB, or 4TB of QLC NAND flash and comes equipped with Samsung’s own MJX controller, introduced with the 860 Evo and 860 Pro. The drive utilises the SATA 6Gbps standard, no speedy NVMe protocol here, and tops out at 550MB/s sequential read and 520MB/s sequential write. That’s the same as the Samsung 860 Evo, and all down to Samsung’s TurboWrite feature.

QLC NAND allows for greater capacity for the same number of cells – a 33% increase. This is achieved through increasing the number of bits per cell (check out our tech terms glossary if you want to know more). But there’s a hitch. With larger values within each cell, performance takes a hit as signal processing and error correction required increases, as does endurance as the cells wear out quicker than ever before. NAND flash is a finite resource, after all.

Luckily for us gamers those theoretical write limits are unlikely to be reached within a reasonable lifetime. Of course, some of you may be in the 0.1% of users supposedly writing 403GB per day – according to Samsung’s own internal study – but at that point a client-side QLC drive might not be for you. At least as a generous Steam library drive, the 860 QVO could come into its own.

Samsung’s Intelligent TurboWrite functionality will be key to performance on the QLC drive. TurboWrite ostensibly runs as a buffer partition in simulated SLC mode, with the slower QLC memory – rated at 80MB/s or 160MB/s on the >1TB models – only being written too once the SSD is idle. With the 1TB QVO drive the TurboWrite buffer is 6GB, although can be increased to 42GB if required for particularly hefty files.

With Samsung now in client-side QLC SSD business, the race is on to make the most affordable HDD replacements on the market. With a potential NAND oversupply hitting prices hard next year, cascading costs on QLC could see gamers start waving goodbye to hard drives in favour of high-capacity flash.