Enjoying that DDR4 memory you only recently bought as part of your new Haswell/Skylake build, are you? Crunching the numbers nicely, is it? Boy, you must feel pretty content with that tower of future-proof hardware purring gently beneath your knees. But what’s that sound? It’s a Samsung engineer standing over your shoulder, laughing at your comedically outdated sticks of memory and their puny data transfer rate. But how? You only just bought it! And you were pretty sure the front door was locked, so how did… never mind. Here’s what you need to know about Samsung’s plans for DDR5, which they revealed at IDF 2015 in August.

Firstly, DDR5 RAM is a different proposition to the GDDR5 (Graphics DDR5) memory widely used in graphics cards. The latter operates at a lower voltage than your PC’s RAM, and uses a 32-bit memory controller per channel versus PC RAM’s 64-bit per channel – post DDR3, at least. Fundamentally GDDR memory is engineered to handle large amounts of data, and DDR is all about transferring smaller data packages at lightning fast speeds. Samsung’s vision for DDR5 has nothing to do with GDDR5, then. (In-depth explanation courtesy of Techspot’s forum for those who want it). 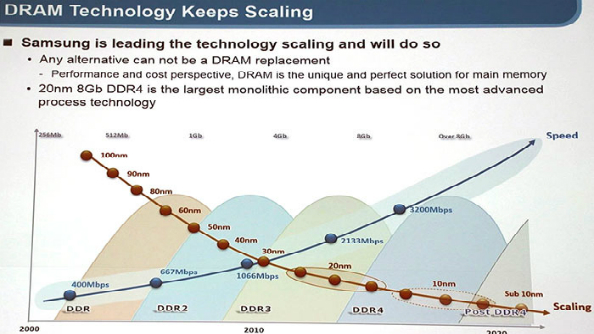 So how will DDR5 differ to the DDR4 memory you, like, just bought? These IDF 2015 presentation slides picked up by Hexus shed some light on the future, as Samsung see it. The next generation of PC memory will arrive in 8GB-32GB modules (no major change there then) capable of over 50GB/s bandwidth speeds (double DDR4’s capability). The South Korean company expect the manufacturing process to slim down to 10nm, and will be experimenting with 2.5D and 3D architectures. 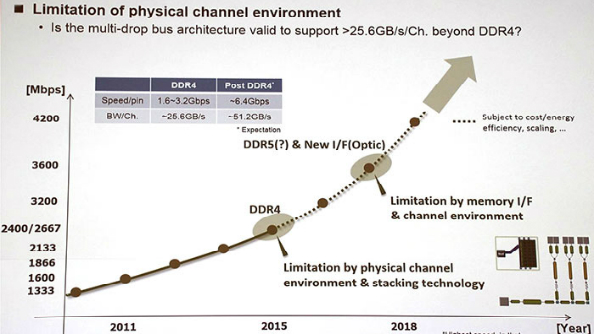 There’ a spot of good news if you have just upgraded to DDR4, though: Samsung aren’t expecting prototypes until 2018, and production models for a further two years. Essentially, you’re sorted until 2020.

Servers will lead the way, according to internal predictions, followed by desktop machines and laptops. Mobile devices might not catch up until after 2020. Meanwhile, since we mentioned GDDR earlier – that’ll be replaced by the high bandwidth memory (HBM) interface that stacks memory chips vertically. It’ll be into its second iteration by the time DDR5 is out on the shelves, say Samsung.