Samsung have just announced the launch of their first Z-NAND product – their answer to Intel’s 3D XPoint SSD tech and Optane SSDs. The aptly-named Z-SSD SZ985 is an 800GB SSD that offers lightning-fast read performance, durability, and low latency.

So you’ve got an SSD… how about one of the best gaming keyboards?

Samsung are a choice pick for your upcoming gaming SSD system and their 850 Evo SSD has long been one of our favourite SSDs for gaming. Sadly, the SZ985 is an enterprise model, aimed at AI and big data. However, if Intel’s Optane drives are anything to go on, that won’t stop them from marketing these drives to really high-end gaming rigs down the line, too.

Samsung mostly fit the SSDs that we gamers run into with 3-bit TLC 3D NAND. The new Z-NAND chips produce random read performance of around 750K IOPS, dwarfing that of TLC 3D NAND 860 Evo at a little less than 100K IOPS. Intel’s Optane tops out around 550K IOPS, but Intel do take the crown write latency and random write speeds, at 10µs and 500K IOPS, to Samsung’s 16µs and 170K IOPS, respectively. 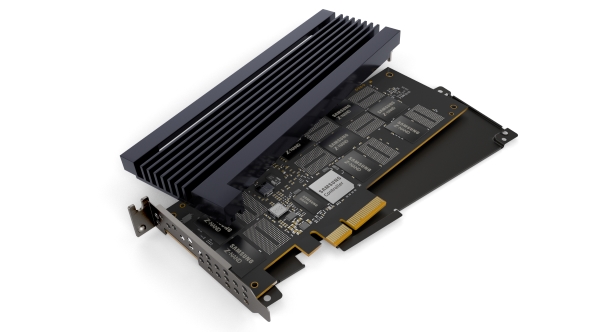 Both drives focus on reliability and durability, which is unsurprising due to their target enterprise market. Extra provisions have been added to allow for the higher reliability, which likely wouldn’t make it into consumer versions down the line to save on some costs associated with Z-SSDs.

You’ll likely be happy for a price reduction at some expense before purchasing one of Samsung’s Z-SSD in either 800GB and 240GB flare when they release in February, anyways. Pricing hasn’t been confirmed as of yet, but Intel’s DC P4800X 375GB model launched at over $1500, so I’ll leave the pricing of the 800GB Samsung up to your imagination.

Samsung are expected to launch a second generation of Z-NAND that will use MLC and have slightly increased latency and capacity – hopefully costs should come down when that eventually arrives. Maybe at that point gamers can get their hands on these super speedy drives, but for now, we will have to settle with boring ol’ SATA and slower NVME drives. Ugh.