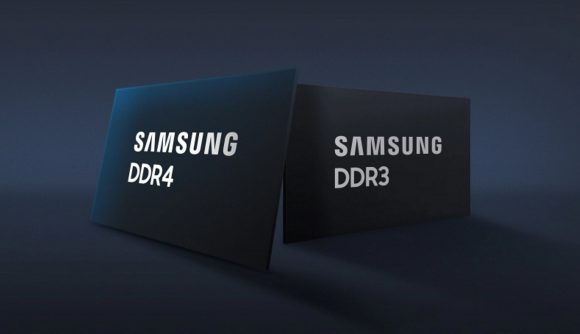 Today, Samsung announced that it has “successfully shipped one million of the industry’s first 10nm-class (D1x) DDR4 (double data rate 4) DRAM modules based on extreme ultraviolet (EUV) technology”. It’s the first company to begin adopting this technology in the production of DRAM, and seems pretty committed to the EUV process going forward.

Samsung also announced that it “expects to begin volume production of D1a-based DDR5 and LPDDR5 next year, which would double manufacturing productivity of the 12-inch D1x wafers”. This “D1a-based” RAM refers to its 4th gen 10nm-class of DRAM which will be produced using this EUV process. So, long story short: DDR5 RAM to be made using EUV in 2021.

And it should be here in 2021, too. Samsung lists “4th-gen 10nm-class (1a) EUV-based 16Gb DDR5/LPDDR5 mass production” next to “2021 (TBD)” in its timeline table. The “TBD” caveat means it could still arrive further down the line, but it’s set 2021 as its target, and, given its previous production cycle, we can at least be tentatively confident that it’ll meet it.

I say “relatively” new, though, because other manufacturers have been testing the EUV waters for a while now. For example, while AMD Zen 3 CPUs are thought now to be made using either TSMC’s N7+ or its N7P process node, the thought for a long time was that it would definitely be using the N7+ node, which uses EUV technology.

What this all means is that in 2021 we could potentially see EUV-made Ryzen 5000 CPUs running alongside EUV-made DDR5 RAM. Fancy stuff.

Whatever the case, Samsung seems excited about EUV, with Jung-bae Lee, executive vice president of DRAM Product and Technology at Samsung, saying “this major advancement underscores how we will continue contributing to global IT innovation through timely development of leading-edge process technologies and next-generation memory products for the premium memory market”.