You may be thinking it is the absolute worst  time to release a new graphics card, and you’d be right. So it’s a wonder why Sapphire are gearing up to launch their Pulse RX Vega 56 on February 12th.

Don’t fancy paying double for a GPU? Here are the best gaming mice around.

The Pulse features a fairly hefty dual-fan design with a compact backplate and PCB design to allow for direct airflow over the heatsink and out into your case. The Pulse features clockspeeds a little lower than that of its Nitro+ sibling, at 1208MHz and 1512MHz for base and boost clocks, respectively, seven-phase VRM, and dual eight-pin power.

Vega’s PCB can be considerably cut down thanks to the move to HBM2 memory, as evident by Sapphire’s Pulse and XFX’s design. It’s a shame any potential RX Vega Nano designs are likely on the cutting room floor by now, or at least on hold indefinitely.

While the card is a slightly more budget alternative to the Nitro+, these are dark days for gaming PC upgrades and new builds. The only pricing hinted for the card so far was spotted by VideoCardz at German retailer Alternate. The price was listed on the site for the low, low price of €789, or roughly $980 / £695 – quite a bump from the $399 price tag that the RX Vega 56 launched with. This pricing hasn’t yet been confirmed by Sapphire, but don’t get your hopes up for a considerably lower MSRP. 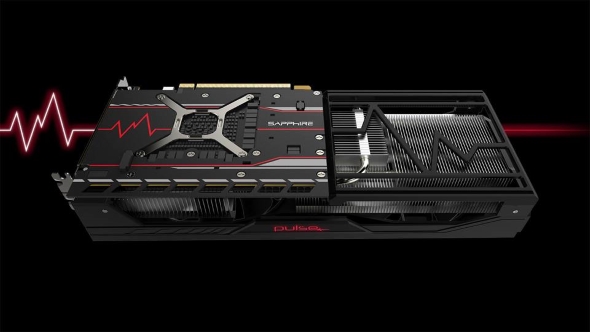 Even with the price sky-high, stock is likely going to be snapped up minutes after launch in Feb – even for this slightly more ‘budget’ (and I use that term loosely) version of Sapphire’s RX Vega 56 custom models. The Nitro+ RX Vega 56 has been almost entirely unavailable since it launched, and this trend is almost certainly likely to continue.

You’ll need to be quick – and likely have more money than sense – to go after one of these cards for gaming use. It seems a little odd that Sapphire would even continue with their Pulse RX Vega 56 launch when more expensive options aren’t getting within two miles of a hardware store before they get get shipped off to some warehouse.

It seems doubtful that the Pulse launch affects Sapphire’s bottom line whatsoever at this moment in time. Despite third-party RX Vega cards seeming too little, too late for gamers, mining has certainly been a saving grace to AMD’s exclusive board partners, who were otherwise facing disappointing return on the Vega architecture.