Whether it’s building an intricate system of working components, assembling a 100% efficient machine, or getting creative with construction materials, building simulations are a genre of satisfaction. Games that capture the happiness of building a city, theme park, or factory from the ground up over hours of gametime – the feeling of making those small tweaks and adjustments to get the perfect efficiency – create slow-burning, lasting gratification.

Coffee Stain Studios understands this kind of joy and has moved on from the chaotic, frenzied nature of Goat Simulator into a world of structure and productivity. Their new game, Satisfactory, is an open-world factory building game where players explore an alien planet and mine it’s resources – think of the wild, colourful world of No Man’s Sky combined with Factorio style mechanics.

But the studio hasn’t left the tongue-and-cheek nature of Goat Simulator behind. Your character is an employee for the company FICSIT Inc – pronounced ‘fix it Inc’ – which has given you the role of mining the planet and boasts a somewhat questionable company motto. “Their philosophy,”programmer Jace Varlet tells me, “is short-term solutions to long-term problems.”

When first arriving in the world the only machine at your disposal is the hub that acts as your home base. As you being to gather resources, cutting down trees and collecting rocks, you can start climbing your way up the tech tree building generators, incinerators, smelters, vehicles, and a whole variety of gadgets to help your mechanical empire grow. 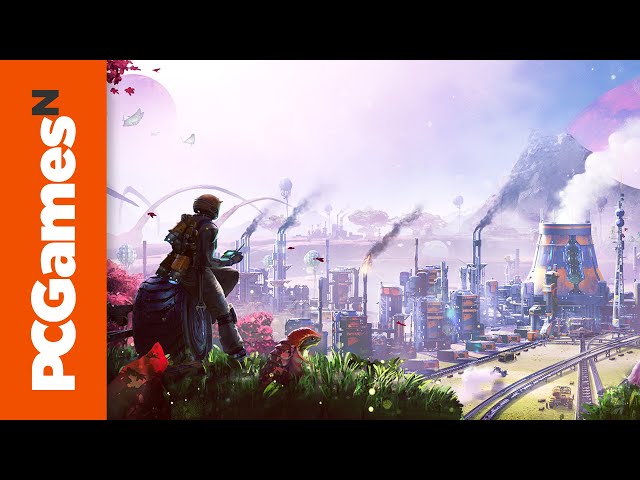 There are several types of biomes which hold different types of resources meaning you’ll need to get out and explore the world. Forrest, desert, swamp and grass field biomes encourage you to journey out and collect precious materials with your trusty scanner in hand.

“You start off with more basic resources like copper, iron, and limestone,” game director Oscar Jilsén explains. “Limestone is used mostly to make cement to build big structures. But then you start going out to get coal to build a better power supply, and to make steel you get oil, you get Bauxite for aluminium, then there’s also quartz and uranium.”

And so begins the never-ending shopping list of materials needed for all the interconnected building you can do. This can seem a little overwhelming, factories can be the size of a football field, after all. But it seems easy enough to jump right in and have a small, working factory in the first hour. 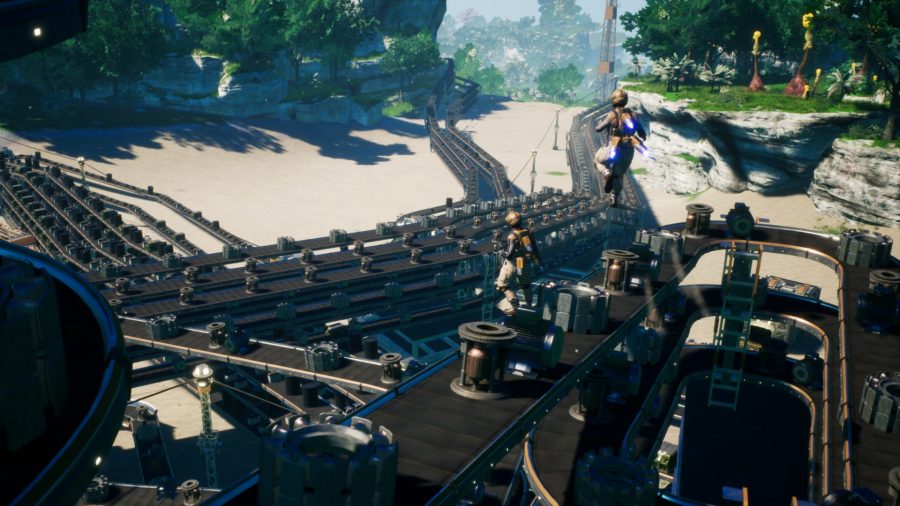 Selecting and morphing materials and deciding what to construct in the builder menu is certainly straightforward. When placing structures, a giant ghost image of the machine appears so you can pop it exactly where you plan. You can access a control panel from the side of machines to set their task and what you want their output to be.

Minecraft is arguably the best builder for community creativity. We've made a list of the most awe-inspiring and mind-boggling Minecraft maps including a recreation of the Aperture science labs from Portal and a steampunk city built on the back of a giant turtle.

Laying down conveyor belts is also simple and fluid – after connecting one end to a machine you can move whilst holding the other end and the track will stretch until you have connected the end to another machine.

There’s a huge amount of space, meaning you can really stretch your creative muscles. The alien planet is huge, almost teasing you with the potential of how big you can make your factory.

“It’s a big break from Goat Simulator and it’s by far the biggest thing we’ve ever done, Varlett enthuses. “It’s incredibly overwhelming. The world is 30 square kilometers – 5.4km by 5.4km so it’s quite big. There’s no limit to how high you want to build, especially when you take into account the third dimension.” 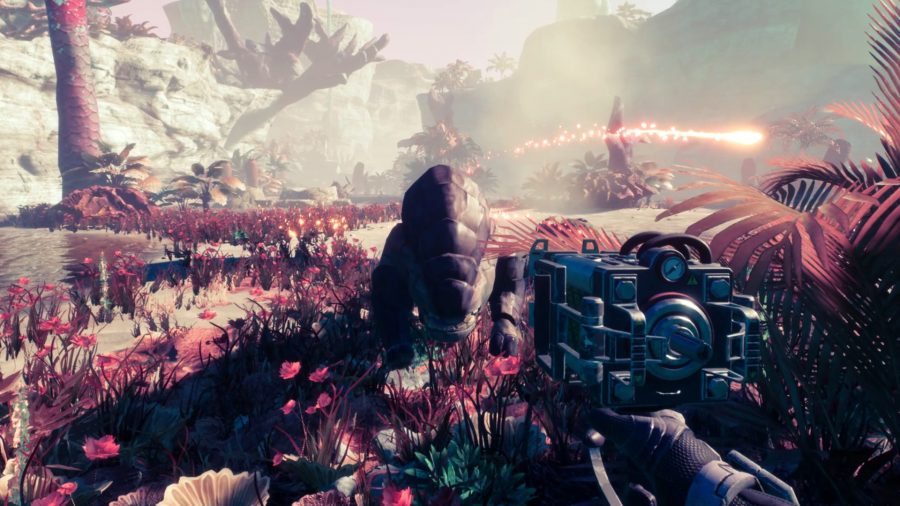 We’re already planning our space elevator. This scale, and the way you experience it, is what makes Satisfactory different from other building and management games such as City Skylines, Planet Coaster, or Factorio. Instead of gazing down longingly at your factory, in Satisfactory you can move through it. You’re in the space, among the atomic hustle and bustle of your machines, riding on conveyor belts and jet-packing hopping through the machinery.

Jilsén shows me the same factory at a late-game point. It has grown incredibly and is now the size of a theme park. Fittingly, there’s even a train gliding between all the structures.

It’s an organised mass of conveyor belts and machines going about their automatic business, it looks like every rollercoaster in Disneyland has been intertwined together, creating acres of interconnected tracks. It covers as much of the landscape as I can see, along the sides of hills and traveling down mountains – it’s somehow both chaotic and methodical. “You can build factories at the top of mountains just because it’s cool.” Varlet says. “There’s no practical purpose of it, it just looks good.”

As we move through the factory I see what looks like a wall in the distance, but as we get closer what I see surprises me. The wall turns out to be lots of conveyor belts all lined up on top of each other. It’s quite the sight and displays the creativity and architectural potential of Satisfactory, some of which Varlet and Jilsén have already seen in their alpha community.

Read more: Check out our list of the best building games on PC

“There’s a Discord user named ‘Blanket Man’ who made a gigantic hourglass,” Varlet says. “It wasn’t made of glass, but it was gigantic. It looks beautiful from the outside and then you go inside there’s this gigantic factory.” 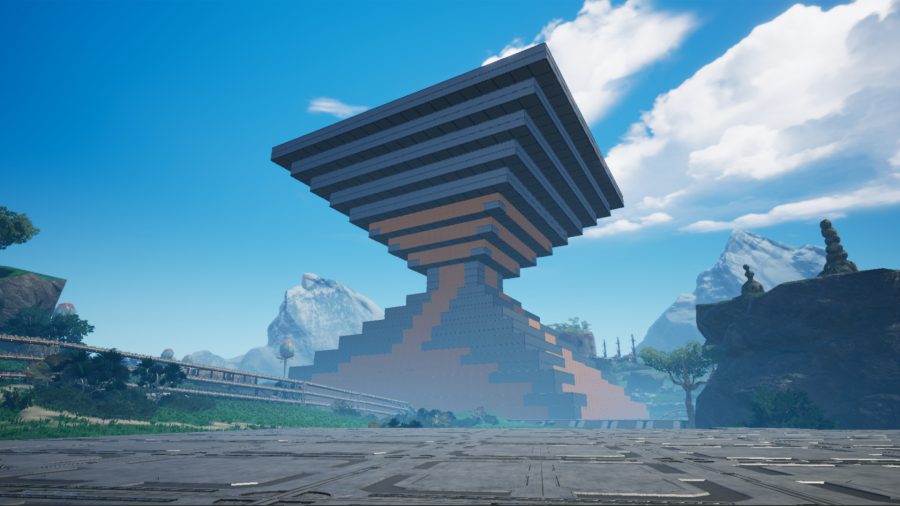 The creativity coming out of the Satisfactory community sounds like the sculptures and creations that Minecraft allows. Coffee Studio has plans to release a Creative Mode for the game in the future, but the Studio is currently focusing on the game’s release – which it announced will be an Epic Store exclusive.

“The exclusivity is for 12 months,” Varlet points out. “What we do after that we don’t know,, we haven’t even thought about it.”

Related: Get building with our Fortnite Creative mode guide

“Another thing that drove us towards Epic is the Support-A-Creator program that Epic provides. We think it’s an excellent system to give back to the content creators. ”We’ve worked with Epic for an incredibly long time, since before Coffee Stain was a thing so there’s a good relationship there. But we also want to advocate for new revenue sharing. Not necessarily just on Epic, but we want a new standard anywhere.”

In respective of where you end up playing it, Satisfactory is a building game worth sinking your time into. The turning of gears, rush of steam, spark of grinders, and the hum of the engines bring your own fully automated kingdom to life.