When Tim messaged me to say he’d found something cool to post at the weekend as a distraction from news, I made the assumption it would not scar me for life. I was wrong.

In case you haven’t heard of it, Google’s Deep Dream is a bit of code that takes an image and runs it through a neural net that picks out shapes it recognises. Mostly dogs. It then superimposes those images onto the places it thinks they should be. You can plug things into a version of it here, with a bunch of filter options. So, as above, you end up with Gabe Newell with dogs for ears and nose and eyes sprouting from places they should not be.

As you can imagine, it has a lot of fun with already esoteric game art and screenshots. Here’s poor old Garrosh Hellscream: 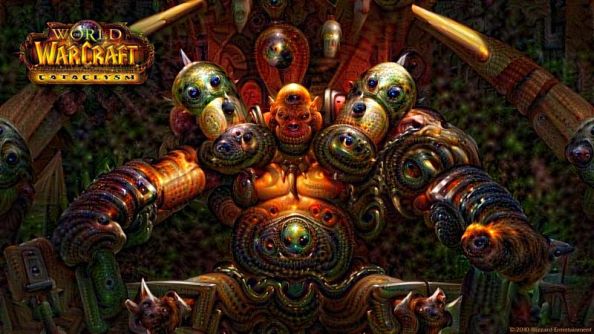 I know WoW gets smack talk for its pauldrons, but at least they aren’t usually eldritch horrors from the nth dimension. Shout out to whoever’s furry friend has merged with Hellscream’s left hand here too, you are immortalised forever. Minecraft fairs little better: 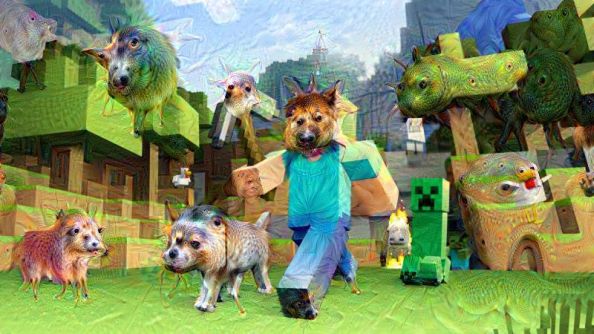 Welcome to cube hell. The creeper is left undoglested because it is already a vision of terror, I assume. In fact, most things in games that are designed to be scary seem to come out the other side of Deep Dream without much difference. Dark Souls’ Gaping Dragon, for example, wasn’t that interesting, but the Asylum Demon, oh boy: 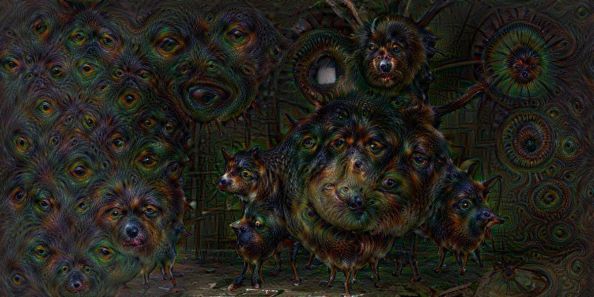 Dozens of dog legs improve anything. The mess of eyes on the left here is dust in the original image but because the neural net is looking for dogs and eyes, it interprets random lines as those things. Here’s a quick YouTube video that explains all this better than I can. In the end, it means that slightly more mundane images will actually create more interesting end results. For example, here’s the world’s largest dog from The Last Guardian, via NeoGAF: 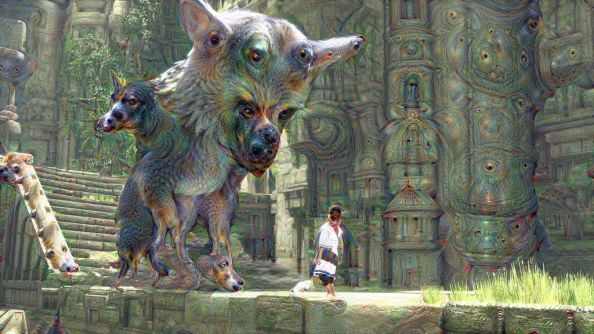 He’s grown an extra head and I think it’s a horse, but it’s fine, just ignore it. For example, you could stare at the main character, who now has a face sprouting out of his hair. And the walls have eyes. Look, it’s fine, distract yourself with this definitely legit Hearthstone art from that same thread: 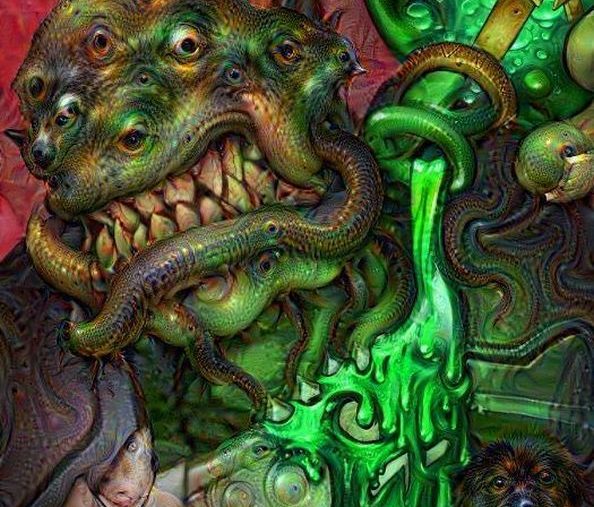 It seems like while human heads will become dogs, orcs will become horrifying messes of snake flesh and eyes with the odd beak poking out of nowhere. At least this poor fellow ended up with a new pet, just above the signature there. I’d be interested to see if art from other card games had a similarly impressive deep dream due to the way art for those games are picked – strong colours, lots of obvious shapes that can be identified at a glance even when they’re quite small.

If you want to see more, here’s my profile pagewhere you can see the various pictures and filters I tried in addition to what’s above. Find anything sweet? Into the comments with them.