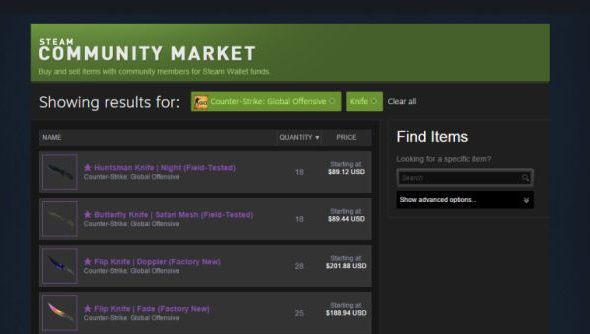 The Steam Market appeared to crash earlier today. Not in the Is Steam Down sense, but the doomy, cataclysmic and unknowable financial sense. An exchange rate exploit temporarily but dramatically affected the prices of user-sold items.

Where’s the new Greek Finance Minister when you need him?

Steam users logged into the Market this morning to find ordinarily expensive Counter-Strike: Global Offensiveknives selling for pennies – and enough had seen The Wolf of Wall Street to know that abstract desirables suddenly losing all of their value was a Bad Thing.

The issue originated with a bug in Valve’s currency exchange rate data, which briefly allowed users with Indonesian Rupiahs in their Steam wallet to buy items on the Community Market at a massive discount.

The usual exchange rate has 1 USD worth around 13,000 Rupiahs – but the glitch left the two currencies valued exactly the same. Items listed for $3 were bought for three Rupiahs, leaving their sellers with a rounded-down $0 – and the prices of items like those CS knives were sent spiralling.

“We have reverted as many of these purchases as possible,” said Valve. “Steam Trading and the Community Market were both disabled while this rollback process was occurring, but are now enabled once again.”

A small set of users are in the uncomfortable position of having their items returned to seller, but their funds still spent. And users adding Indonesian Rupiahs to their Steam Wallets via codes have found the wrong amount appearing in their account. Valve are working to fix both problems.

CS:GO knives are now selling for upwards of $50, so normal service appears to have resumed for the most part. Have you noticed anything odd at the market today?