Everyone could do with a little self care. Gaming can be an exercise in sporting excellence or a terrifying journey into the brutal and macabre, but there’s nothing like an evening diving into a story that’s just as much about you as it is the protagonist. The perfect game can become a soothing embrace that eases you into an evening, and few remedy a rainy day – or even an aching heart – like Sayonara Wild Hearts.

At the game’s core, I’d say, is an exercise in becoming at one with your badass self following loss. As our famed narrator (Queen Latifah) tells us, we meet our hero picking up the pieces from a broken heart, shattered “so violently that her sorrow echoed through space and time”. Yet the pain is never enduring to the plot. The moment our esteemed narrator quietens, our hero is tipped from their slumber – longboard and all – into a succinct one-and-a-half hour journey of closure and self care.

You fall into an aesthetically stunning world inhabited by stylish gangs, mechs, and pastel overtones, all doused in a familiar and mechanical arcade points system. Within seconds the game’s mechanics are clear: collect hearts and chase ever-increasing high scores. But it’s much more than a race to the finish line and a handful of medals proclaiming the dexterity of your digits. It’s about the journey. Take a second to listen to the music, sink into the laser-etched visuals, and dance-battle to your heart’s content.

By the end of the first level – an epic downhill traversal set to Clair de Lune that longboarders could only dream of – you’re ready to take on anything Sayonara Wild Hearts can throw at you; no longer the girl falling through her dreams, but now her stylish, masked alter ego. 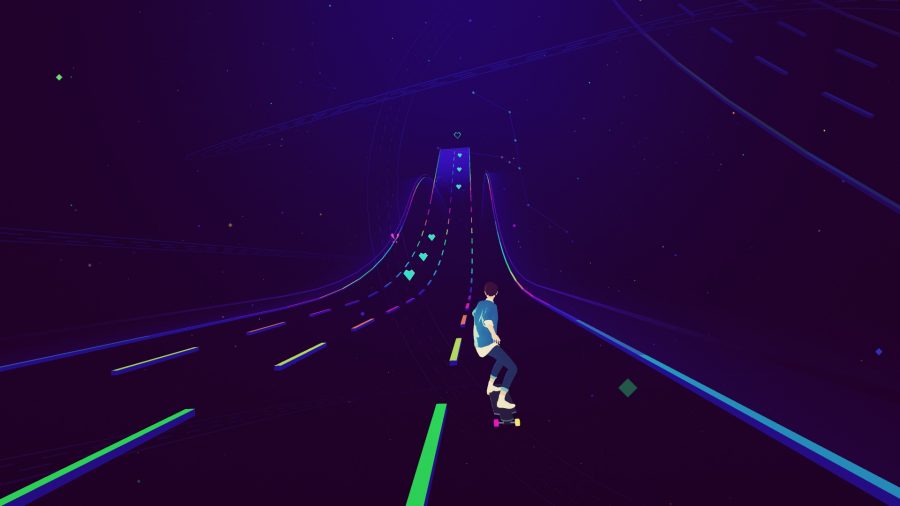 From bedroom to highway through space-time in an instant, you’ll soon ditch your board for a menagerie of vehicles. A motorcycle, a wild stag, a car cruising through the desert, and eventually a favicon version of yourself stuck in the VR-sphere.

Take a second to listen to the music, sink into the laser-etched visuals, and dance-battle to your heart’s content

The controls are easy, which helps Sayonara Wild Hearts suit PC as much as Apple Arcade. You move side to side, perhaps a jump here or there, and all with the style and finesse of a skater gliding effortlessly across the ice. In very little time you will have grasped the tempo of every level – each complete with a carefully crafted score, attuned to every animation and action, created by the superb Daniel Olsén and Jonathan Eng, and with vocals from the talented Linnea Olsson. 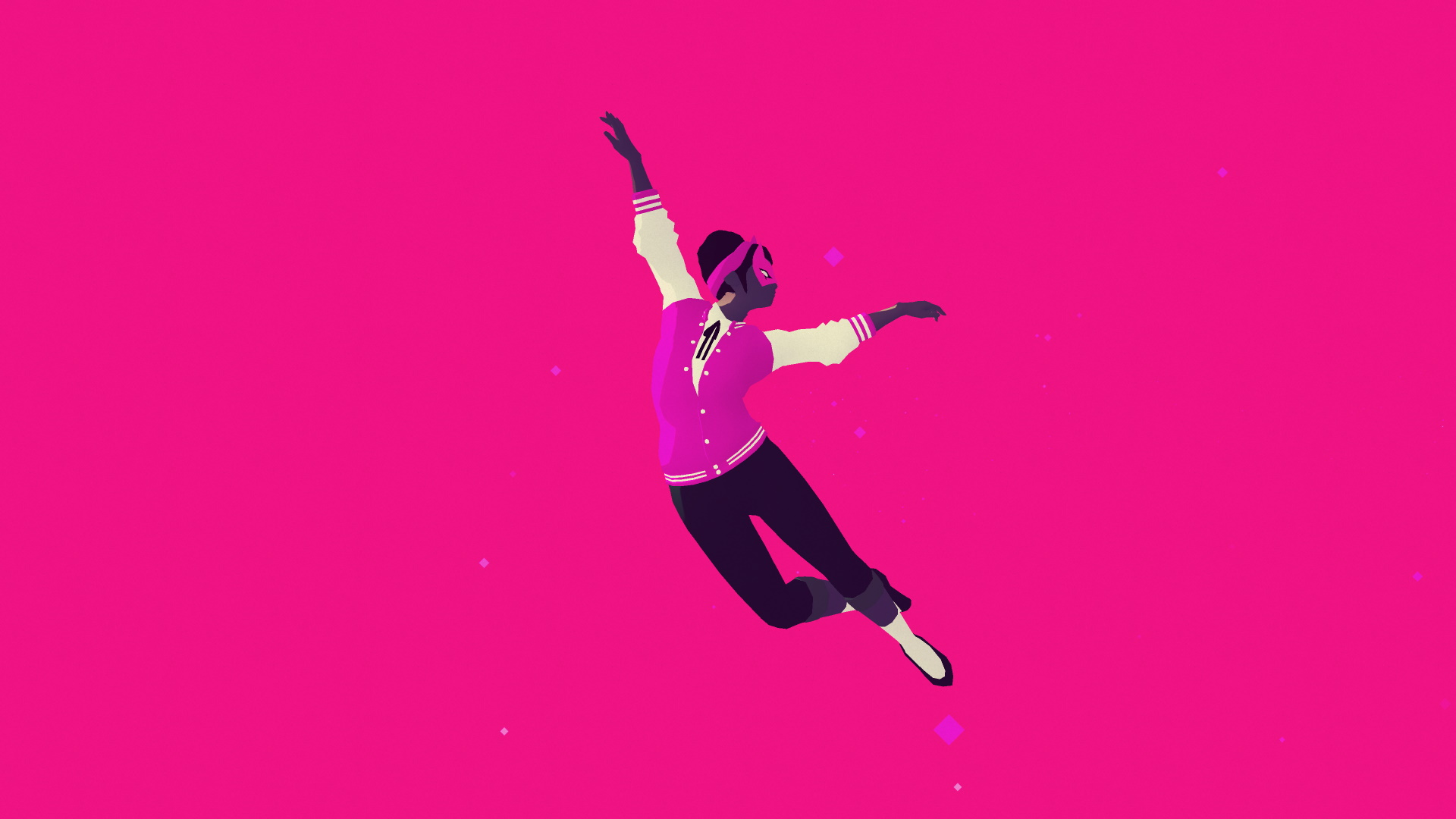 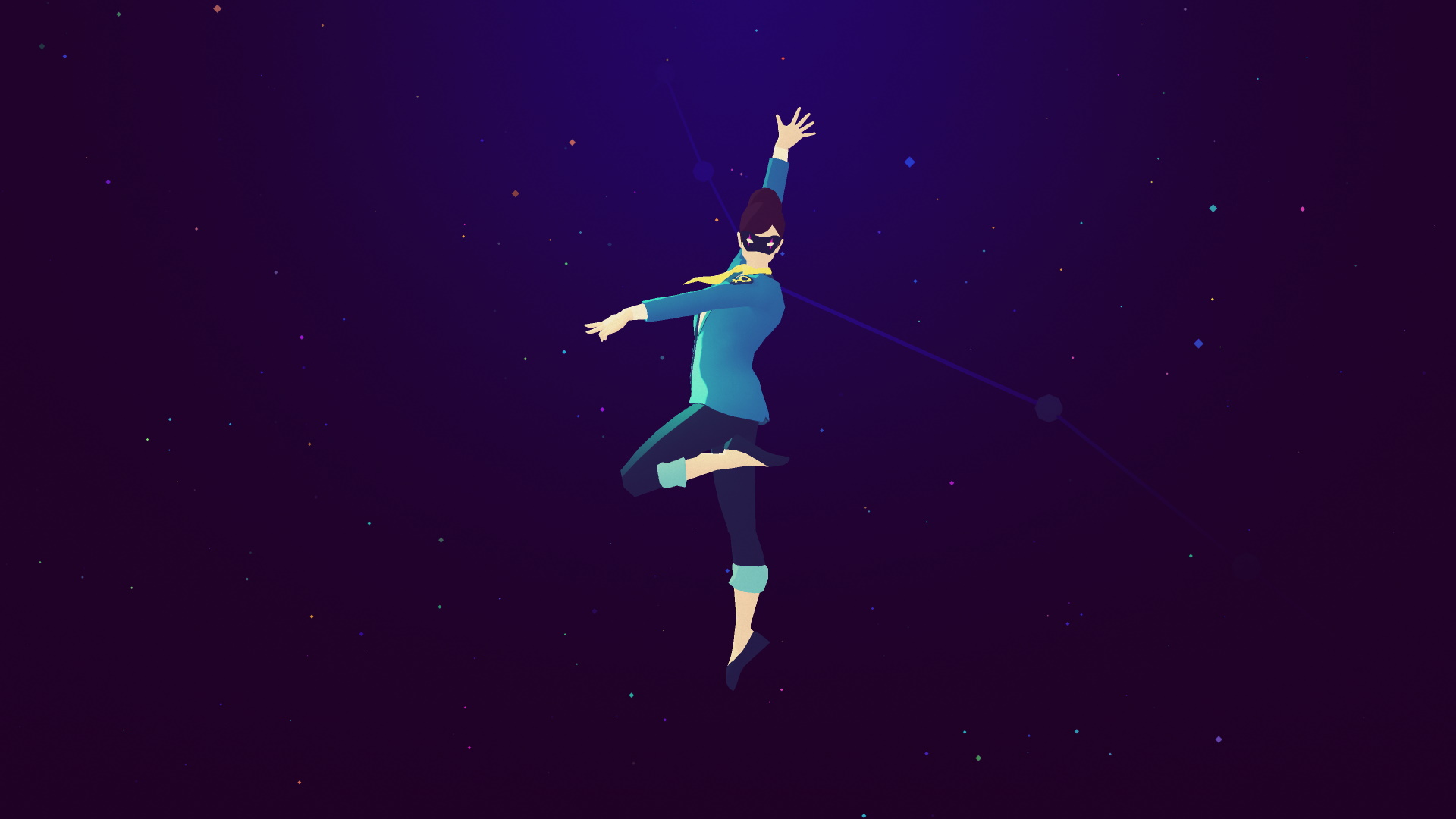 The soundtrack is nothing less than exceptional, each track custom-made for Sayonara Wild Heart’s 23 levels. It’s comprised of a couple viciously catchy pop romps that will keep energy high and your head bobbing along, but also contrasting tones, such as imposing bass-heavy hits that score the later levels as your opponents gain devilish facades. Level design is built to match, obscured by trippy visuals. A beat transports you between realities – reverberating across psychedelic scores or relaxed ambient electronica.

Sayonara Wild Hearts’ difficulty is what you make of it. It’s not forced, nor is it tacked on. If you want to go for gold every level, get after it. If all you want to do is stare at the cutting art style and take in the sights and sounds, you can do so without condition. Quick-time events will stick around for some time whether you’re in for a penny or a pound. 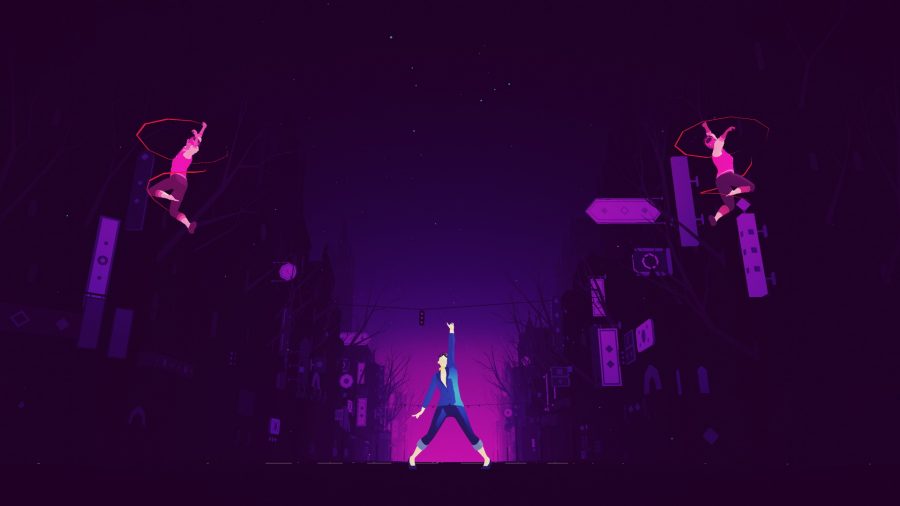 Chasing high scores can be saved for the tenth or twentieth playthrough, and believe me, you’ll find yourself coming back for more – replayability is through the roof. Once you’re in the second, fourth, or tenth playthrough, you’ll really nail down that gold medal.

Sayonara Wild Hearts is a fleeting techno-pop ballet that’s unlike anything else, one which fills you with overwhelming determination and a sense of self worth. It’s the love letter you should’ve sent to yourself a long time ago – tantamount to 20 Buffy the Vampire Slayer marathons or three long candle-lit baths.

Sayonara Wild Hearts is a shot of pure positivity to the heart, delivered with excellence, fun, and finesse through a staggeringly bold and bop-worthy soundtrack.