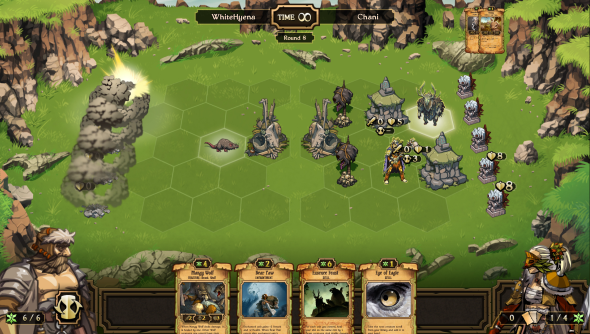 At long last Mojang think Scrolls is ready to step out of beta and into the harsh light of 1.0. They’ve announced Scrolls’ release date is set for 11 December.

The collectible card game’s been in beta for more than a year, originally releasing on 3 June, 2013. Regular patches and updates have tweaked the cards, you can now play drafts against other players, and you can craft shiny cards, too.

There’s also been a significant balancing patch which has tweaked the values of 28 cards.

When Scrolls launches next week there’ll be over 350 different cards to collect, each of which can be put into a deck and used in battles against other players. The beauty of CCGs is finding cards that combine well. For instance, one scroll might summon a weak unit to the battlefield which on its own won’t offer much of a fight, but when combined with a card which duplicates weak units, you can use it to overwhelm your opponent.

This wealth of cards means you’ll have a stack of units, spells, enchantments, and structures to experiment with.

You need to earn gold to get new cards – either buying them from other players or from the Scrolls store. Gold’s rewarded from playing matches and earning achievements, and Mojang say that every card is available with this in-game gold.

However, there is a real money currency in the game if you’d like to fast track your way to a specific card. Shards can be bought in the Mojang store and traded for cards. Mojang say they “restrict how much you can spend to retain game balance.”

If you’ve been taking part in the alpha or beta tests then you’ll have access to a version on all the release formats at no extra cost. If you’re a new player you’ll be able to pick up a copy of Scrolls from Mojang’s store for $5.

Scrolls saw 28 of its cards tweaked in a recent patch, you can read through the details on the next page.

“Twenty eight scrolls have been adjusted in the patch that has just hit live servers,” Mojang write. “Healing now removes poison, and there’s some fancy new art for Ducal units.”

There you have it. Have fun!