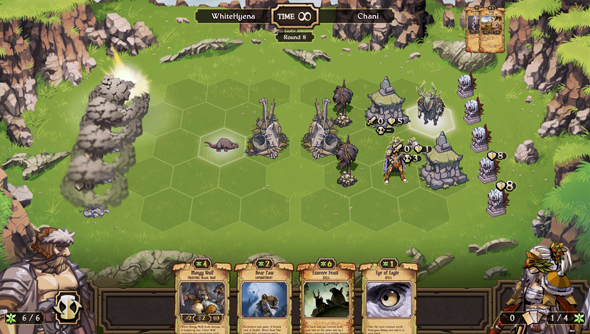 Scrolls is getting dressed up ready for release on tablets. Mojang’s CCG’s been on PC for well over a year and, while not being quite as successful as the developers’ other game, it’s formed a devoted following amongst its players.

However, with an impending mobile release Mojang have had to face up to the fact that few tableters/tablists/tablerians are likely to spend $20 on a game.

To that end, Scrolls’ price is being dropped to just $5.

“Cross-platform play is extremely important to us, so creating separate communities for tablets and PC/Mac was out of the question,” write Mojang. “We’re also determined to maintain a one-off cost for Scrolls and not pressure our players into spending extra cash in order to be competitive, or to have a good time in both the early and late game.

“Our current price of $21 isn’t feasible for tablets. As you probably already know, games are cheap on those things. Free-to-play would be an option, but we’re not keen on the way that that form of monetisation can affect gameplay.”

To that end they’ve decided $5 is a fair price for their game and that it will be $5 on every platform, including the PC. So as not to ire the people who bought Scrolls at full price, existing players will receive a “$20 shard package at no additional cost.”

The changes take place this Autumn.