You can play Sea of Thieves totally solo by hopping aboard your tiny sloop, closing off your party to random matchmaking, and managing all the drudge work of your anchor, your sails, and your ship’s heading at once. It’s absolutely dreadful. Turning the sails, it turns out, is a lot less fun than shouting out the order to do so. When you play alone, you’re playing with the stark white bones of the game, stripped of its actual meat – which is other people.

Cynically, you might posit that Sea of Thieves is the kind of bare multiplayer experience that can only be made tolerable by the company of people that you like. But that’s not fair, or true. Instead, it uses social interaction to weave magic. Every bare spot in the game’s design is actually a human-shaped hole, where the unpredictable decisions of another player fills in the blank to make the design work.

It’s been nearly a year since Sea of Thieves first set sail but it’s only recently that it found a wide audience, picking up a large following on Twitch. It’s that new success that’s pushed us to go back to the high seas and see what’s changed.

Though, there have been four major updates expanding what you can do in Rare’s pirate sandbox, the basics have remained pretty much the same. You pick up a quest from one of a handful of vendors, sail out to an island, and either dig up buried treasure, fight some skeletons, or solve a riddle. Then you take the resulting booty back to port, spend some gold on new cosmetics, and repeat the process.

It’s a truly cooperative process, at that. A galleon has three sails, each of which has to be individually set and turned to capture the wind for whatever speed you want to sail at. You’ll need someone in the crow’s nest to look out for unknown dangers on the horizon, and then someone at the bow to watch as you come into port and give the order to drop anchor before you hit a deceptive shallow. 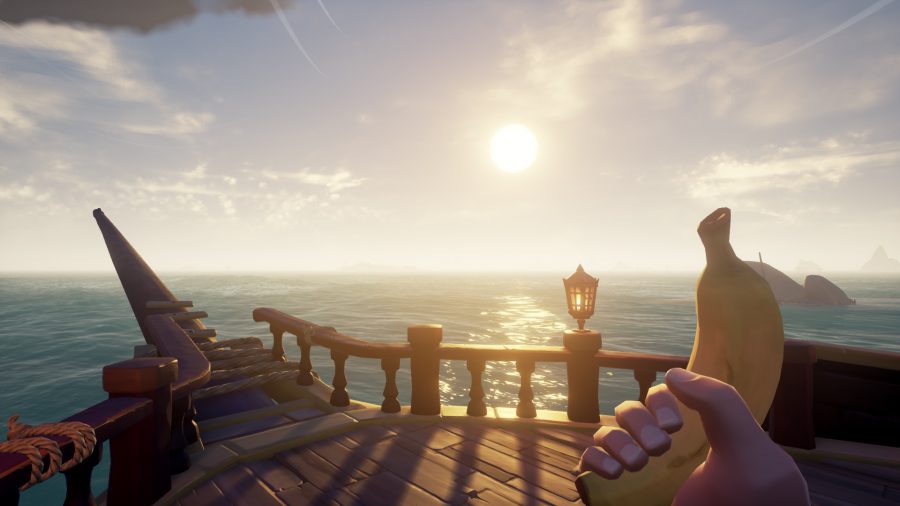 Hopefully you’ve got someone left over to check the map below deck, shouting up directions to the rest of the crew about which direction you need to aim for. That filters through to whoever’s in the crow’s nest, as they try to decipher whether the peak in the distance is the island you’re heading for or some craggy rock that’ll tear up your ship. Then those instructions have to reach whoever’s at the wheel as they try to direct the bulky, slow-turning vessel, usually while the sails block the horizon from view.

Are they flying the Jolly Roger because they want to kill or because it looks cool?

It feels a lot like the chaotic co-op action of a game like Overcooked, where you and your partners try to delegate roles sensibly, even as you start to stretch yourselves out because there are simply too many to fill. If you’re at the wheel in Sea of Thieves, you need to trust your crew to tell you whether you’re steering safely or not. As the helmsman, you have to make a trustworthy call on when to drop anchor before you run aground (I have abused this trust many times).

While you’re doing all of that, other crews across your server are doing the same – running through the same mental gymnastics of teamwork while deciding on their own goals and picking up their own treasures. Whatever loot they have on board is exactly the same kind as that you’re sailing to capture – so why not try to take it directly from another crew? It’s pure business efficiency. 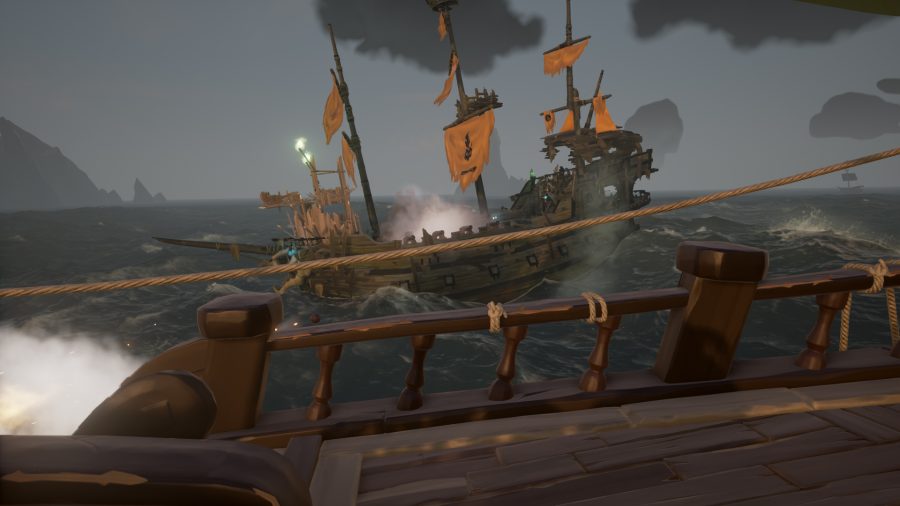 That could mean a full-on naval battle, in which you try to scuttle the other crew’s ship and secure their treasure. It could mean sneakily hopping aboard an unprotected vessel while it’s docked and absconding with the loot while its crew is engaged in PvE battles. Or it could mean working together with another crew to take down NPC bosses and then sharing the loot. That third scenario is far more common than you might think. In fact, it’s roughly a coin flip over whether any given crew is going to greet you with a friendly wave or with cannon fire.

Sea of Thieves’s recent success as a streaming game was kicked off by Summit1g, and he’s popularised a bloodthirsty playstyle in the game. That brought a controversy among existing players over whether this is trolling or just playing the pirate game as a pirate should. As another pirate franchise might say: “take what you can, give nothing back.”

The community that’s sprung up around Sea of Thieves over the past year is as devoted to camaraderie as to piracy, and that’s essential to its success. When you see another ship out there, you have no idea how that crew will receive you. So you approach each player encounter with caution, whispering with your crew about what you think is going to happen. Are they flying the Jolly Roger because they want to kill or because it looks cool? Do you think those pockmarked sails mean they’ve been through a big battle and are low on resources? Most importantly, how many of them are on board, and do you reckon we could take them if things turn violent?

Sea of Thieves’s greatest success isn’t in being a pirate game, then, but its capacity to be a sandbox that encourages its players to act like cartoon swashbucklers who keep pushing their luck to the limits. You might be drinking a friendly grog with another crew at port in one moment, and then daringly firing yourself out a cannon at their ship in the next, so that you can have a duel and steal their cargo. Maybe the other lot are giving chase while you jump overboard, climb up their hull on the other side, and drop their anchor to secure your crew’s getaway. 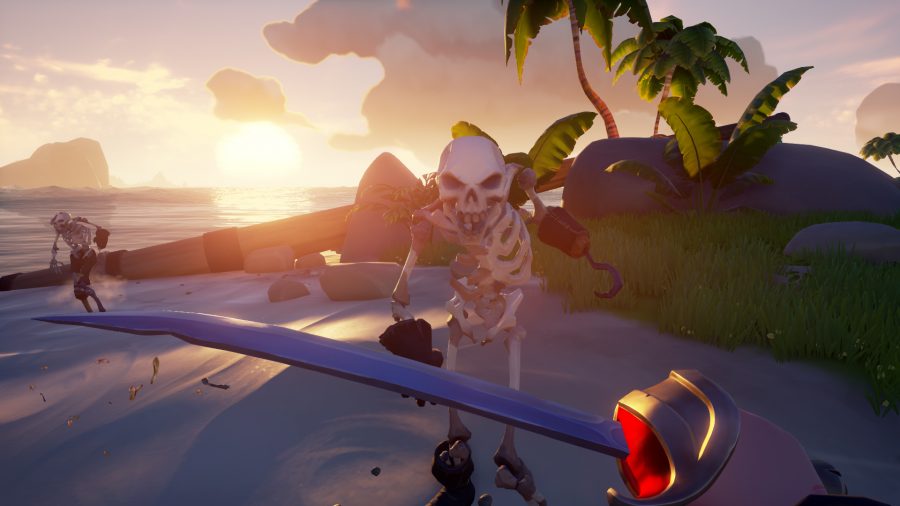 That whole experience has been with Sea of Thieves from the start, but each of the free updates – and it’s worth emphasising that they’ve all been free – have added a new danger to watch out for while you’re sailing around. The megalodon. Roving ships helmed by skeleton crews. A whole new island chain full of fiery volcanoes and boiling shallows. They’ve all entered the game as limited-time mini-campaigns with unique rewards, before becoming more broadly integrated into the game.

Each new change has added a bit more texture to the game, and the most recent update – Shrouded Spoils – focused on making all that content feel much more immediate and important with new rewards, different variations on the skeleton crews, and more types of loot.

Related: Set sail in the best pirate games on PC

Nothing so far has upended the experience, instead adding variety. Yet even then, variety is still the thing Sea of Thieves is most wanting for. There aren’t any upgrade trees, powerful weapons to unlock, or major quest lines to follow. That can be baffling for some, but there’s a respectable adherence to design philosophy behind that: every pirate spends the entire game on even footing. 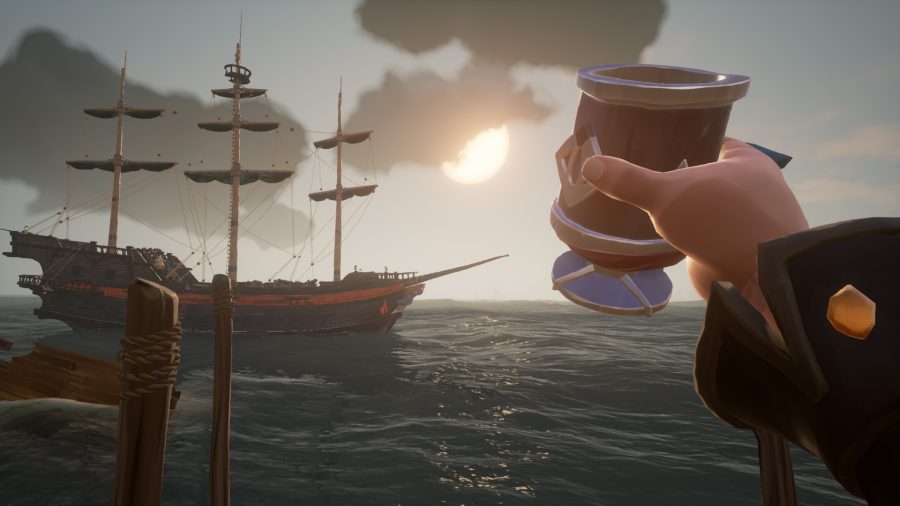 There’s no escaping the fact that you’re going to be doing exactly the same tasks in your first hour with the game as you will 20 hours later and beyond. Get some treasure, buy some cosmetics, and repeat. Usually, that formula fades into the background as a sort of MacGuffin to push you into cooperation and competition with other players. Sometimes, though, the stars fail to align, leaving your session as a dull grind for new junk.

Sea of Thieves manages to push the pieces into place far more often than not, and dependably manages to inspire its players to play along with the pirate magic that keeps everyone engaged. Neither I nor my regular crew play every day, and I suspect that if we tried to, the cracks in the hull would become much more readily apparent. Instead, every few weeks one of us blurts out in excitement: “We should pirate this weekend!”. The hours with Sea of Thieves that have resulted over the past year have been among the most memorable I’ve ever had with a game, similar memories though they may be.

Check the system requirements and answer the questions… Can I run Sea of Thieves?

A year of updates has helped fill out its light content, but the real magic was there from the start. Rare’s take on cartoon piracy encourages you to behave as a cartoon pirate should: a little bloodthirsty, a little silly, and almost always drunk.

8
Sea of Thieves - Xbox One