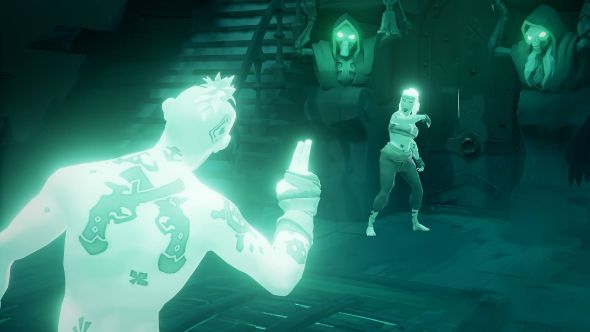 Update March 27, 2018: Rare are no longer planning to charge you gold when you die in Sea of Thieves.

The news comes via a blog post in which executive producer Joe Neate runs down the big issues in the game since launch.

Defeat the Kraken with our Sea of Thieves guide.

Some would-be pirates have said that dying in Sea of Thieves comes with too few penalties attached, which can obviously undermine the tension that a life of maritime crime should induce. But when Rare proposed to dock your gold upon death, it didn’t go down to well on Reddit. Referring to that reception, Neate says:

“We’ve heard the sentiment there, so I can confirm that Death Cost is, well, dead. Thanks for the feedback here. We’re listening.”

Otherwise, Neate says launch went fairly smoothly, barring a few small “hiccups” on Friday evening. He acknowledges some issues around player rewards and achievements being delayed, players struggling to get into the game at peak times, and characters losing some cosmetic details. The first two issues are still being worked on, whereas the latter two should be fixed with an update today.

Here’s the announcement over at Rare.

Original story March 22, 2018:Respawn costs are coming to Sea of Thieves. In thegame’s update 1.0 patch notes, Rare announced the update would be coming to their pirate adventure in the future.

Currently, dying in Sea of Thieves costs you no more than a bit of your time, as you take a trip on the Ferry of the Damned, but in the ‘Coming Updates’ section of the game’s release notes, Rare said that they will soon be introducing a Death Cost, which “has the Captain of the Ferry of the Damned deduct a small gold fee when you die.”

Rare haven’t said how much that’ll be, but they do say “rates are dependant on the cause of death, so the more avoidable the death, the less patience the Captain will have.” The idea of rates likely means that you’ll pay a percentage of your current worth upon respawn – getting blunderbussed by an enemy player will probably only set you back a small amount, but falling off a cliff or drowning is likely to prove more expensive.

The planned update doesn’t seem particularly popular on the game’s subreddit, as griefing and spawn-camping have been problems faced by some members of the community. Rare haven’t announced when Death Costs will go live, but I imagine they’ll form part of the next major update.