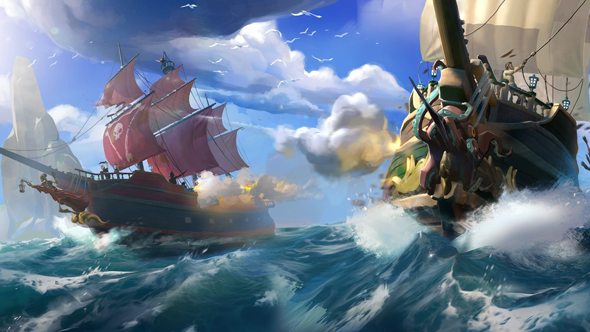 Some of the quests in Sea of Thieves have you following a map to dig up treasure, and some of this treasure can be contained inside Cursed Chests – chests that imbue you with debilitating status effects. One is called the Chest of Sorrow. Once aboard your ship, the chest occasionally starts to cry, filling below deck with salty tears and forcing you to bale the water out before you sink.

During the closed beta, some players found a workaround for this particular chest. They would strap it to their back and hang off the side of the ship, on the ladder, causing the tears to fall into the ocean. This exploit will be fixed for launch.

“We’re going to fix that,” design director Mike Chapman tells me. “We saw the community doing that, we knew that flaw was there, and it leads back to the whole thing of: do we get surprised by the mechanics we put in the game? Because we put mechanics in and we’re not sure how people are going to use them. We put all this freedom in the game, and then it’s interesting to see how tactics spread throughout the community.

“So we saw that, if you’re on the outside ship ladder, the water is falling off the ship – is that valid? We thought it kind of made sense, you know, sacrificing one crew member to hang on to the ladder.”

This method essentially renders one player useless for the duration of the journey. They are stuck hanging from the side of the ship, unable to help out. This is why Rare decided they would plug this particular tactic.

“The fact it’s now all across the community – it’s something we are going to fix,” Chapman explains. “Because it’s a curse, they are Cursed Chests, it’s like a status effect. So any time you’re in connection with that ship it will fill your ship up. The ladder will not be an exploit. What it’s there for is to force players to cooperate to get the reward inside, which is why you’ve got to bale the tears out.”