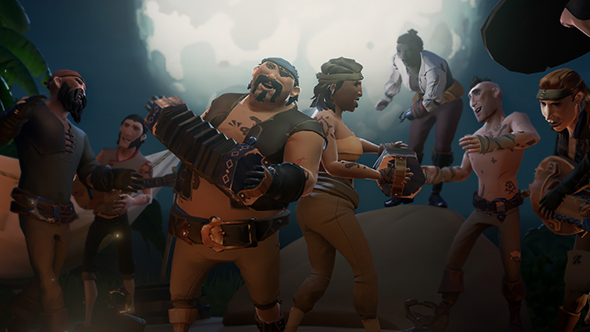 While Sea of Thieves is generally focused on sandbox fun and multiplayer shenanigans, there is one long-term goal that all players are theoretically aiming for – attaining the status of Pirate Legend. That means maxing out your reputation among all three of the game’s quest-giving factions, which unlocks the path to further fame and treasures. A Twitch streamer has just become the first to attain the lofty rank.

Get started on your quest for fame with our Sea of Thieves tips.

Prod1gyX just earned the accolade, and if you want to avoid endgame spoilers you should stop reading now – though there’s not much to spoil. A “mysterious stranger” appears in a tavern, and they’ll offer you a new title, outfit, and shanty. An accompanying riddle suggests playing some music will open a secret staircase leading to the Pirate Lord, who’ll offer more advanced versions of the faction quests.

Certain groups in the Sea of Thieves community would dispute that Prod1gyX “earned” the accolade, however, as he apparently had quite a bit of help from his Twitch followers in reaching max rank. Essentially, the folks promoting #NotMyPirateLegend say that the streamer hopped into a bunch of friendly pirate crews just before they turned in their respective quests, earning XP without contributing to the voyage.

You might argue that playing fair never earned a properly pirate-like reputation, but the Sea of Thieves subreddit is now filled with players asking Rare to avoid offering any in-game honours for a moment that was supposed to be a bit more momentous.

When we asked Rare’s Mike Chapman about Sea of Thieves’ endgame, he said “the first person to find this hideout and get the Legendary Voyages is probably going to become a bit of a celebrity in the Sea of Thieves world. Not everyone is going to get there, it’s an ultimate end goal to aspire to.” Several other streamers are close behind Prod1gyX, and Rare tell us they have further plans for post-game accolades.