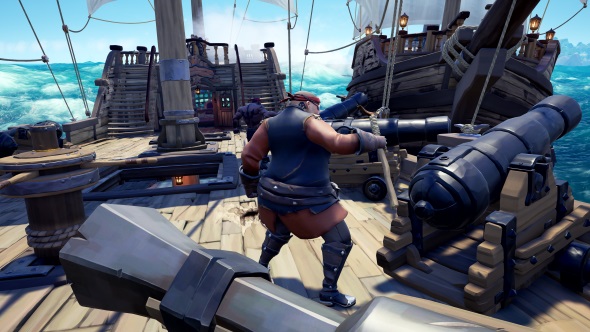 Sea of Thieves is the most fun I have had in a multiplayer game. That is not to say it is the best multiplayer game ever made, but it is certainly the first that I have had to pause during play due to the streams of tears rolling down my face as I laugh uncontrollably. What I learned is that, at face value, Rare’s pirate sandbox is thin and light, but dig deeper and you will quickly find Sea of Thieves’ greatest treasure is that it is a stage for your own slapstick comedy show.

Are you sailing the seas? Take a look at our Sea of Thieves quest guide.

If you have already dived into Sea of Thieves and found it more frustrating than funny, then that is understandable: for a game that appears accessible, it is annoyingly obtuse. A complete lack of tutorial shrouds the fiddly basics in a seemingly impenetrable fog, and the initial quests barely explain what you need to collect, nevermind where you may find the items you require. If you ever played Minecraft in the days before punching trees became second nature to every PC gamer, you will understand the levels of confusion that Sea of Thieves evokes.

Your first challenge is to actually set sail. Sea of Thieves is not exactly a nautical simulator but it does place a variety of demands on a crew. There is no minimap, meaning someone will have to navigate and shout directions from the map room. Sails must be opened to the correct height and angled to catch the wind, and constantly adjusted during a voyage to maintain the correct speeds. The high levels of interaction it demands from a single crew is delightful – emphasising from the start that this is a game about players working together. 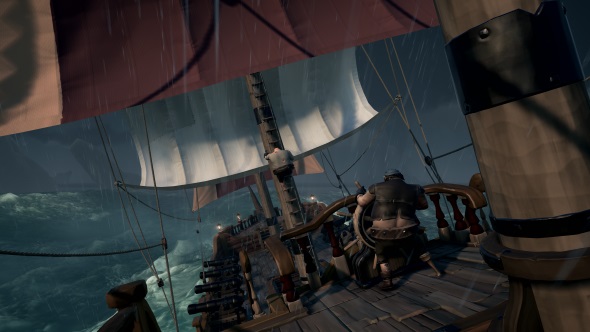 A little exploration goes a long way. Embrace it and soon you will be sailing the seas with a broader level of understanding of both the mechanics and the general thrust of the game. It is at this point that Sea of Thieves’ depth begins to unravel. Rather than being content with providing a small archipelago for you to aimlessly mess around in, this cartoon Carribean feels akin to a miniature seafaring Elite Dangerous. The framework is thin, with tasks that, at least initially, amount to nothing more than deliver X to Y before a deadline. However, it is the emergent stories that unfold around these quests that provide Sea of Thieves with its entertainment value.

With a crew consisting of myself and fellow PCGamesN writers Jordan and Ali, I accept a standard entry-level quest to deliver two pigs. After loading a couple of cages for the cargo into our hold, we ship out to a nearby island in the hope of finding some wild hogs. The task list requests one pink and one black pig. Seems easy enough.

A few minutes later we have a pig in a cage but we have clearly caught the wrong breed. Covered in brown spots, this is neither a pink nor a black pig. I crouch next to the cage to work out how to free the frightened animal, but see no solution. In response, Jordan simply pulls out a blunderbuss and blasts the creature to smithereens, leaving an empty cage that is of use to us again. Through horrified screams and bursts of laughter over VOIP, I see his logic. 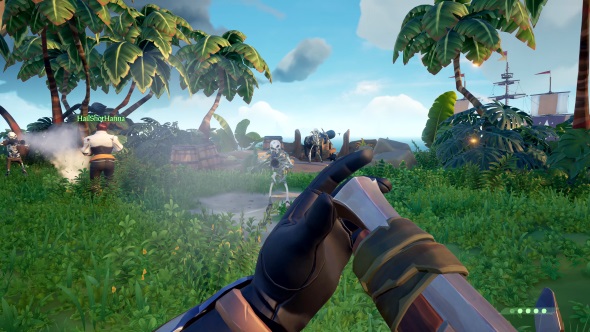 We eventually capture the required pigs and load them onto the ship. A few minutes into our return journey one of the pigs evaporates. It just disappears. It is at this point that we realise livestock needs to be fed, and that ignoring the upset shrieks of a pig is something only a careless sailor would do. I feed the surviving animal bananas while Jordan plays a sombre funeral tune on a herdy gerdy to mark the passing of our innocent cargo.

On our way to a second island in search of a new pig, we come across another set of players in a much smaller boat. Our excitement overrides the requirements of the quest and so we begin an extended chase sequence. The tiny two-man sloop, crewed by a duo much more talented than ourselves, threads itself through a maze of sharp rocky pillars, but is eventually skewered on the bow of our galleon. Ali and Jordan dive from our deck to theirs with smoke erupting from their blunderbuss muzzles. Standing at the helm of our ship, I watch the mission unfold through a spyglass; the sole survivor of the enemy crew dives off the side of the ship as they flee our raid. Success!

As Ali and Jordan plunder the captured ship’s hold, I turn to look at our own galleon. The fact that the main deck is about four feet underwater indicates that perhaps the raid was not as successful as first thought. I scramble aboard our newly-captured scruffy tub as our colossal ship sinks out of sight. In its wake, an empty pig cage floats to the surface. That’s karma, I suppose.

This adventure is something that will live in my memory for a long time, but whether Sea of Thieves can continue to delight in this way over the long term remains to be seen. Meaningful progression is important, even in a game where the core of the excitement comes from player interaction rather than mechanical structure. Completing quests improves your standing with the game’s various factions, but in my first few hours I have yet to see what new missions higher standings provide. Quests will need to be much more involving than delivering livestock to keep anyone invested beyond the game’s opening weeks. 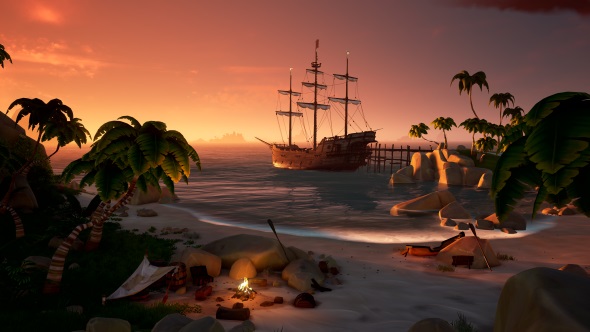 It is clear that simply following pre-set goals is less than half the fun, though. Sea of Thieves is a game best played by a group of curious minds that do not require waypoints and strict mission parameters. During our voyage, our group stumbled across a riddle that began a treasure hunt which soon took precedence over everything else. Just like the hunts you used to do as a child, these clues took us to new areas and asked us to perform tasks that unlocked further information. Each new island we visited offered up its own little story alongside a new clue – on one beach we found a cursed chest that instantly caused the holder to become horrendously drunk, while on another island we were chased from our objective by skeletal warriors. It is clear that there are plentiful opportunities in this world, but they are more freeform and lacking in details than you would expect from a game of this type.

Sea of Thieves is a strange game in many ways. So many of its mechanics are weirdly obtuse: Why do I need to take a quest all the way to my ship and plonk it down on the table to start it, when, inevitably, I will then have to run all the way back to the island town in order to collect the items I need for the job? Why does all my progress in a treasure hunt disappear if I log out the game? But there were many similar questions I had of Minecraft, and that went on to be a phenomenon. Mojang’s beast does, of course, provide you with the tools to make anything you want, which is the core reason behind its success. Sea of Thieves has nothing quite so malleable. But, if you were to consider personal experiences and adventures as replacements for building blocks and projects, then perhaps there is a bit of Minecraft’s immortal go-anywhere-do-anything spirit in Sea of Thieves. I hope so, anyway, because I do not want this euphoria of grog-fueled fun to end anytime soon.