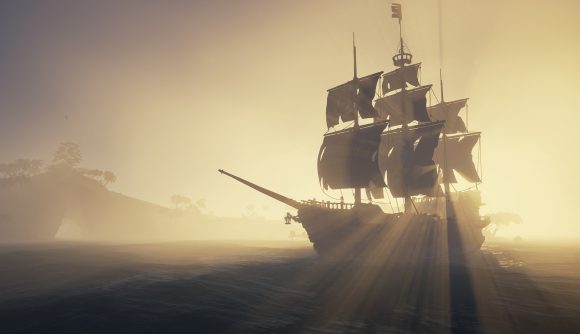 Sea of Thieves’ latest free expansion is Shrouded Spoils, and it’s out later today. Rare’s only provided a tiny teaser for the new update – a full trailer will likely precede the launch – but early details suggest this will be a refining update that makes battling the big monsters on the open seas more varied and more rewarding.

The kraken will show up more frequently now, has new attacks, and will deal more damage to your ship. You’ll get loot for taking down each tentacle now, though it isn’t clear what rewards those’ll be. The megalodon gets some new looks for its random spawns, and will also now give loot when you beat it.

Skeleton galleons and sloops can now spawn around the world as another option for NPC battles. Skeleton forts are getting perhaps the biggest upgrade – they’ve spawned on the same handful of islands since the game first launched, but there are six new locations where the big battles can now happen.

Rare hasn’t given us a full, official breakdown of the new features, but Polygon has put together a list. It’s mostly made up of general improvements to the quality of what’s already there, and the one truly new is a rolling fog that will occasionally cover the map to make navigation a bit more difficult.

You can check out a quick teaser below.

Something is emerging through the fog… Shrouded Spoils, our latest free content update arrives tomorrow!
The game will be offline between 10am and 2pm GMT for server maintenance and the update. Remember to grab any remaining Festival of the Damned time-limited cosmetics! pic.twitter.com/2GJicPpPuO

That’s in addition to the usual stuff, like new customisation options and a handful of new booty types to collect for the three factions. In terms of new features, it looks like this is one of the smaller updates for the game, but a little extra life for what’s already in place will certainly be appreciated.