Back when Sea of Thieves released, the game was lacking a compelling villain. Sure, there were the mindless skeletons that patrolled its sandy beaches in pursuit of gold, sharks that would stalk the shallows in search of a snack, and a monstrous kraken that would occasionally appear from the depths to sink unsuspecting crews. But these are elements for the player to bounce off, not world-conquering villains with their own machinations.

Accentuating this void was the abundance of merchandise Rare released alongside the game that teased two potential villains: the fearsome Gold Hoarder, and a cursed skeleton lord by the name of Captain Flameheart (note: this article will get pretty spoiler-heavy from here on out, so this is your chance to look away now if you are yet to finish Tall Tales or read the game’s expanded material).

You’ll no doubt recognise the former of these two villains as the boss you encounter in the Throne Room at Tribute Peak during the Shores of Gold Tall Tale. But Captain Flameheart has largely been missing in action, with only a few scant details about his potential whereabouts in-game. Or at least, that was until the November update The Seabound Soul shed some light on things.

In the Tall Tale of the same name, players join the Captain of the Blackwyche, Sir Arthur Pendragon, on his quest to free trapped souls. But after releasing the souls of two pirates, players stumble across an eerie sarcophagus and unwittingly unleash Flameheart from his prison. Once free, Flameheart appears momentarily to taunt the player, before swearing vengeance on those that imprisoned him. 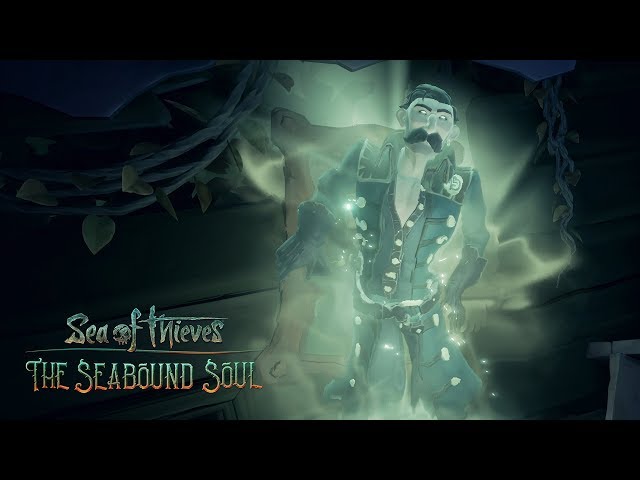 What makes this revelation so significant is that it implies a more active villain for players to go up against. The Gold Hoarder was quite content to be left to his riches, with players having to go to great lengths to confront him. This time around, Flameheart is promising to bring the fight to the players, which suggests that uneasy alliances will need to be formed in order to defend the seas from the impending threat.

We might also, finally, get some answers to some of the game’s biggest mysteries. Where has Flameheart been for all this time? How was he imprisoned? And who exactly is – or was – he? This last one, in particular, has been subject to much speculation from the community, arising from some ambiguity within the lore. 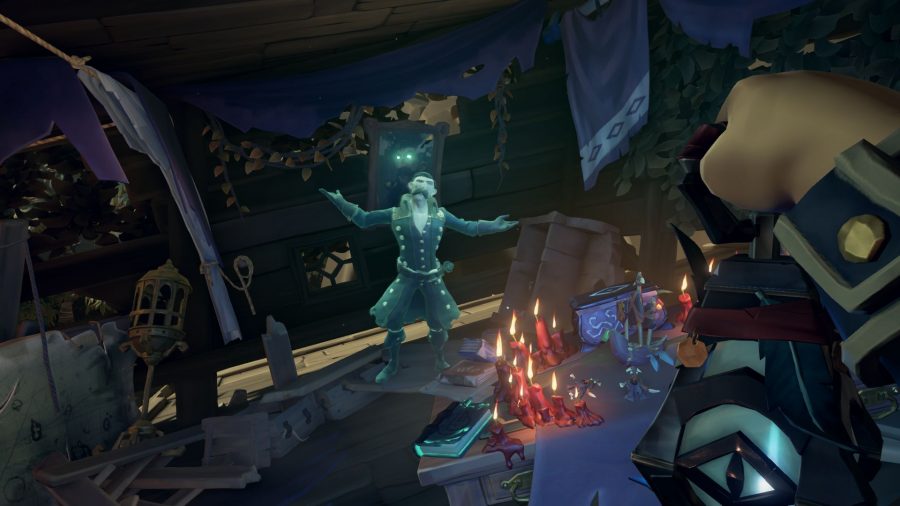 If you’re unfamiliar with the Tales From the Sea of Thieves book, it details the adventures of a young scholar who seeks to become a feared pirate like his father. The scholar takes on his father’s name, Captain Flameheart, and sets sail for the Sea of Thieves. This means there are actually two Flamehearts, the younger Flameheart, who is the narrator of the book, and his adopted father. This has inspired lots of debate over the identity of the Captain Flameheart that we see in the game, with plenty of evidence to suggest he could be either of the possible candidates.

For fans of its story, it’s never been a more exciting time to play Sea of Thieves

Those who believe it is the younger Flameheart usually point out that Flameheart senior is dead by the time Tales From the Sea of Thieves takes place, and that he supposedly retired to his estate outside the Sea of Thieves where he died in comfort. They also highlight Flameheart junior’s final journal entries as proof of his transformation. 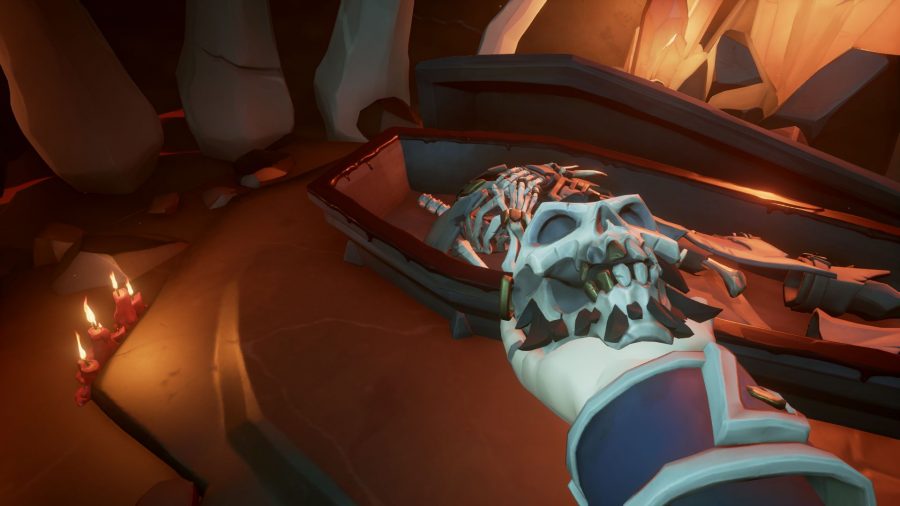 Here, Flameheart junior and his crew are cursed when they drink from a golden chalice, with the younger pirate writing: “I am Flameheart, and these are my words, but this is not my voice. Though, I sense now that it is who I truly am”. Potentially, Flameheart junior could have encountered some unknown evil that transformed him into the skeleton being that we know today, though exactly what this evil could be is up for debate. The last we hear from him is that he joined the crew of a mysterious figure known as the Cap’n, who it is implied was the original captain of Flameheart senior’s ship, The Burning Blade.

The Gold Hoarder's true identity is only hinted at in-game, but he appears extensively in the Sea of Thieves expanded universe. In the novel Athena’s Fortune, we discover he was formerly Rathbone, a member of the Pirate Lord’s crew who betrayed his captain and stole the keys to several hidden treasure chests. He established the Gold Hoarders alliance with the fortune they contained, before his greed stuck him with a curse and he retreated to the safety of a hideaway beyond the Devil’s Shroud.

Those who suggest the older Flameheart is the figure in-game like to call attention to the younger Flameheart’s lack of pirating skills. Flameheart senior had a fearsome reputation on the seas as the mutinous Captain of the Burning Blade, as revealed in the Tales From the Sea of Thieves and numerous in-game journals. The Burning Blade existed in the time of the Pirate Lord, who was the first pirate to ever reach the Sea of Thieves, and was the ship that successfully sunk the Magpie’s Wing, as detailed in the Shroudbreaker Tall Tale. This makes him a much more likely candidate to be such a prestigious figure in the game’s lore.

It’s also been theorised that the crew of The Burning Blade once managed to steal a cannon from the Ferry of the Damned (a theory that was first posited by the Sea of Thieves’ YouTuber Captain Falcore). This cannon is allegedly the same one that Salty and Wanda the Weaponsmith discovered prior to the Cursed Sails campaign, which ended up carrying a curse that transformed Wanda into the evil Captain Warsmith. This is another good argument, with the cannon potentially explaining how the older Flameheart became the supernatural figure. But, for the moment, it’s still all a matter of perspective, with developer Rare holding its cards very close to its chest. 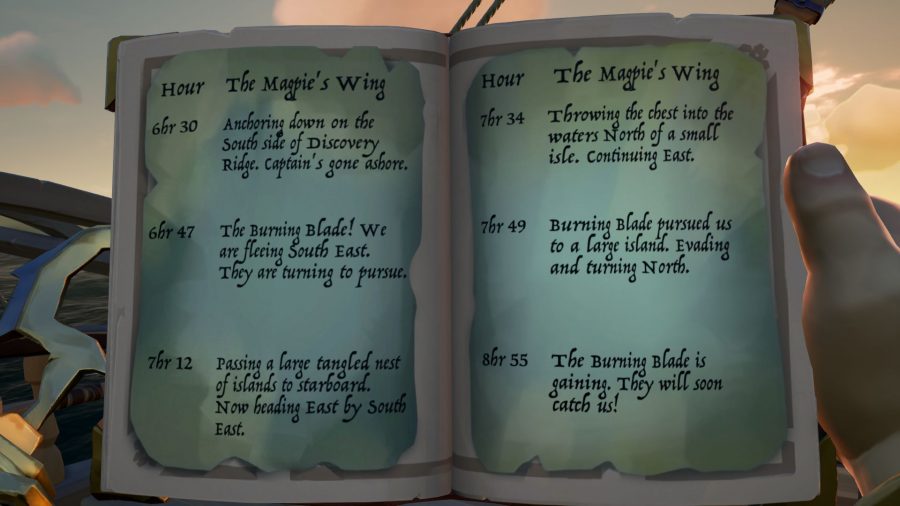 For fans of the game’s story, it’s never been a more exciting time to play Sea of Thieves. Heading into the New Year, there’s a lot to look forward to, including future Tall Tales that will likely shed more light on Flameheart’s background. Between then and now, all that is left is to speculate on what will happen next, and pay close attention to our surroundings for any hints that have been left around the world.