Next week, Sea of Thieves will allow your pirate to change their underwear – or its colour at least. In a developer update posted by the Sea of Thieves YouTube channel, it was revealed that there are upcoming clothing changes, including more feminine clothing options and underwear colour choices.

The update will mostly include a load of quality-of-life changes, making the player experience more consistent, or a little less annoying. The first is fixing barrel chain explosions, so that when ignited they explode one by one rather than in a massive boom. The next is pets becoming less annoying in stressful situations via audio changes – “basically they’ve got a little bit braver”. Before the update the repetitive sounds of a distressed animal in an already high tension moment has bothered players, so the devs have listened and made your companion a bit fiercer.

Another vital improvement is the new ability to toggle actions rather than holding down their trigger. For example you can toggle aiming on and off rather than holding that particular button down. This improves accessibility of the game for anyone who may find it difficult to continually put pressure on a controller, allowing them to navigate the multiplayer aspect of the game more easily.

For those that want your pirate to look a little more feminine, there are updates to wardrobe options as well. With this update, we’re told that more feminine clothing will be added to the game, and executive producer Joe Neate mentions the all important underwear changes. It’s worth noting that all characters will be able to use these new feminine clothing options because, if you want to wear a skirt why the heck shouldn’t you be able to. 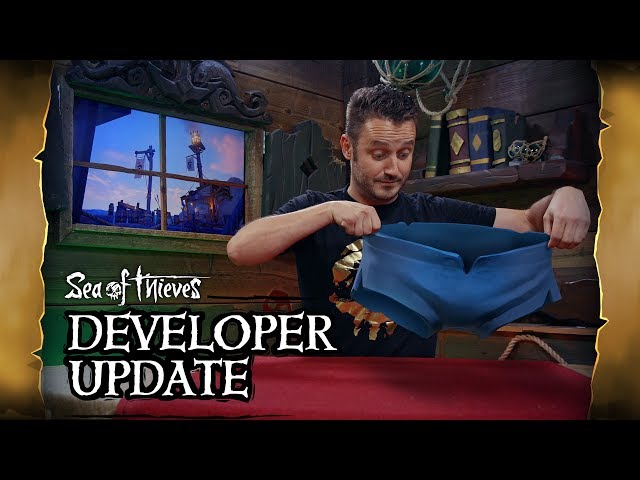 Sea of Thieves is recognised as being one of the best pirate games out there, and progressive moves on underwear colours is *chef’s kiss* the pièce de résistance of the update.

In all seriousness, the accessibility moves are really promising and excitingly they’ll be rolled out next week. I’m sure they won’t be pants. Actually, technically they will be, right?