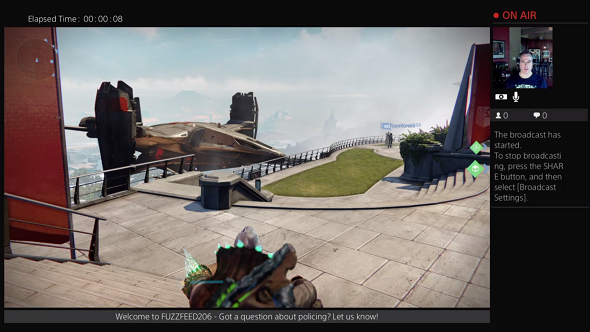 If you’ve been reading the news this week, you’ve probably seen mention of Charleena Lyles, a woman who was shot and killed in front of her children by police attending a reported break-in at her house.

The police say the 30-year-old woman was holding a knife, but there has been heavy criticism of the incident from the public. In a bid to settle some of that criticism, the Seattle Police Department have given an official update on the case. This wasn’t any normal update, though.

The update was aired on Twitch, via the department’s Fuzzfeed206 channel, in which they talk about their work while playing shooting games such as Destiny.

The clip in question doesn’t feature any shooting, thankfully, but it still feels like a strange place to update the public on serious incident like this, in which someone has died at the hands of the police.

In the video above, Sgt. Sean Whitcomb (aka Vesper Bat) talks viewers through the case, from how officers had responded to a call there previously, including all the events leading up to, and during, the incident. Whitcomb even talks about the victim’s mental health on the stream.

In a comment supplied to The Stranger, Whitcomb defends the department’s decision to run the show.

“It would’ve been inexcusable not to move forward with a broadcast considering we’re dealing with one of the most difficult incidents in recent years,” he says. “The content provides a very straightforward update in regards to where the investigation is at.”