Second Extinction throws a whole lot of familiar ingredients into a science fiction blender. It’s got the repeatable cooperative action of Left 4 Dead, the comic book dinosaurs of Turok, and even the online world tendency shenanigans of Demon’s Souls (really). You can look at any element of Second Extinction and see exactly where it’s come from, but the shooter manages to build its own identity where intelligent tactical co-op shooting and gloriously dumb dinosaur gore meet.

It’s the future. Earth has been overrun by evil mutant dinosaurs, and you’re part of a small group of humans who have returned from space to take the planet back. In practical terms, that means you’re dropping from space for brief bouts of mission-based dino murder. You drop into one of a handful of open-ended maps, follow big objective markers through hordes of violent dinosaurs, maybe complete a few side missions, and then extract to collect persistent rewards. Rinse the blood off and repeat.

Once you’re on the ground, Second Extinction moves fast – and so do you. Dinosaurs can surround you in a hurry as you move toward your objectives, and your experience might go from ‘lonesome stroll’ to ‘full-on dinosaur stampede’ in the space of a few seconds.

You’ve got a ton of options to reposition yourself, too – your movement speed is absurd, you can slide down hills Apex Legends-style, and you can dodge side-to-side while circle-strafing the horde. But the game’s also full of super-heavy animations where, for example, your weapons take a minute to catch up to your crosshair, and while that doesn’t interfere with the action (apart from when the dinos effectively knock you out of your special abilities), it does give everything a delightfully silly slapstick touch, as you and the dinosaurs careen into each other with ridiculous force. 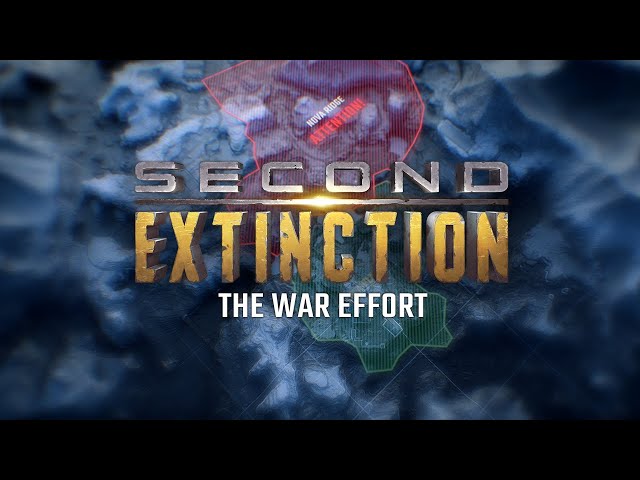 True to what we’ve all learned from Jurassic Park, the dino packs work hard to flank you, except here the attacks come not from the other two, but the other dozen-or-so raptors you didn’t even know were there. Their tactics are reminiscent of a raid party in World of Warcraft: a pack of tank raptors will soak up your fire as you blow chunks from their rocky armour, then the speedy grunts will tear around the sides to knock you out of your reload animations, while dinos spitting acid start peeking over hills to ruin your day with ranged attacks. That’s before one of the big triceratopses or ankylosauruses shows up to charge at you.

The attacks come not from the other two, but the other dozen-or-so raptors you "didn't even know were there"

It’s a lot to keep track of, and you’re going to be constantly running dry on ammo and resources as you fight the hordes – but your character abilities help to mitigate that. There are a handful of named characters with unique abilities. During our preview session, I played as a tanky character who can call an area-of-effect healing station from space and set up electric fences. Others can do things like drop ammo stations or call airstrikes.

Smart cooperative play is essential here, because while your guns are effective at culling the herds, they’ll never be enough to take on a full attacking horde. So you’re going to need to create bottlenecks, set up traps, and lure the dinos through them to have a hope of survival. That gets even tougher when you head to the underground caves where the reptiles make their nests – you can’t call your air drops down there, so you’ve got to take extra precautions before heading in. 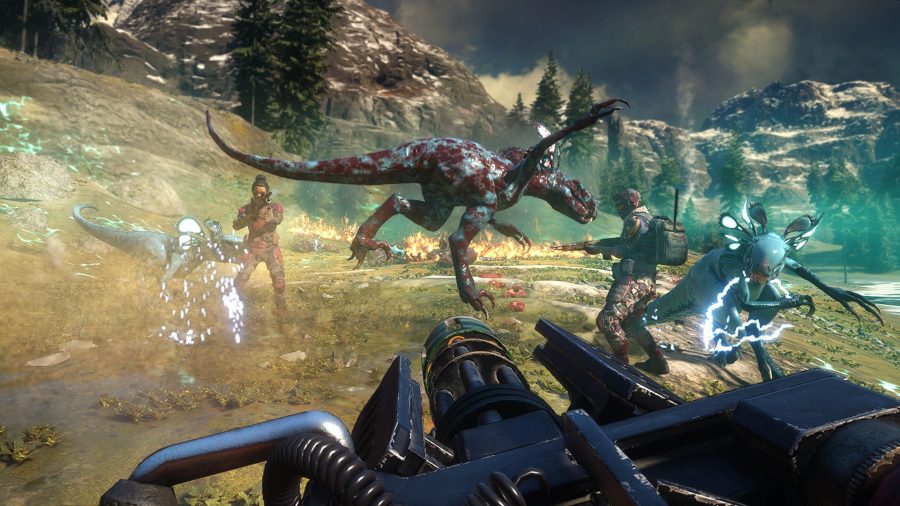 The levels are open-ended, but this isn’t an open-world game. You won’t be hiking across vast empty fields to get to the next objective. Instead, it works out like a compressed series of stages to give you a multitude of pathways toward your objective, with little encounters and side activities to pursue along the way. You’ll be able to find respawn camps that let you run back closer to the action when you die, or little activities like collecting dino eggs, which will give you further rewards once you complete the mission.

Between rounds of dino murder, you’ll upgrade your character with skill points, which you can put into basic things like improved damage, or get more robust ability improvements. You’ve got to spend resources to unlock access to skills, and while you can move your skill points around however you like, they have a cap. So you can respec before every mission if you think there’ll be a better loadout for whatever you’re currently trying to accomplish. 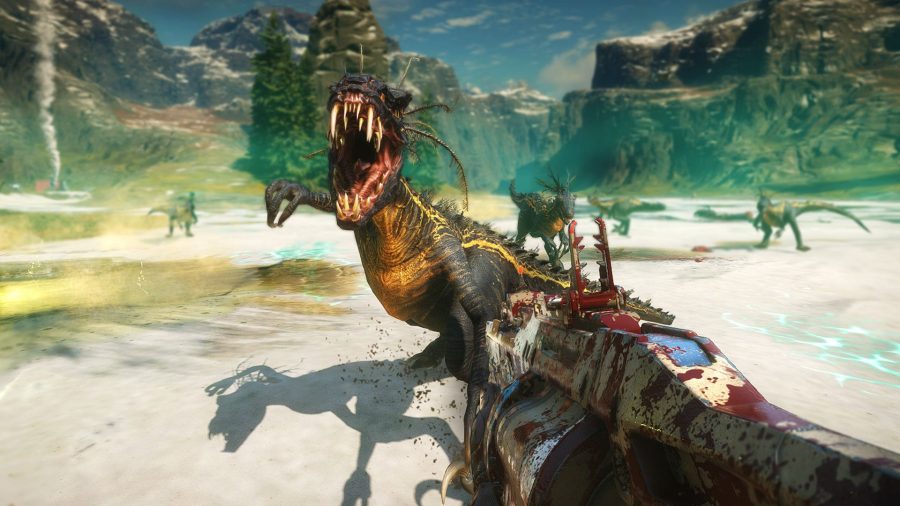 Certain factors, like weather and dino positioning, are random and will change every time you jump into a map, but the real shake-up might come from an overarching online War Effort system that reflects how everybody’s been playing. It’s a bit like the world tendency system from Demon’s Souls. As players complete more missions in a given zone, the dino threat will ease, and future missions there will be easier. Other areas might get totally overrun, and you’ll have to wade through even bigger hordes to complete your objectives.

I went through one loop with Second Extinction, and had a terrific time with it. The question is how many loops it’ll take for the premise to wear thin – it’s about nothing more or less than shooting endless waves of dinosaurs, after all. If the War Effort and randomised encounters can do enough to keep each run fresh, this could be a terrific addition to your rotation of co-op games. We’ll get a better idea of how it’ll hold up over the long haul once Second Extinction hits Steam Early Access in October.