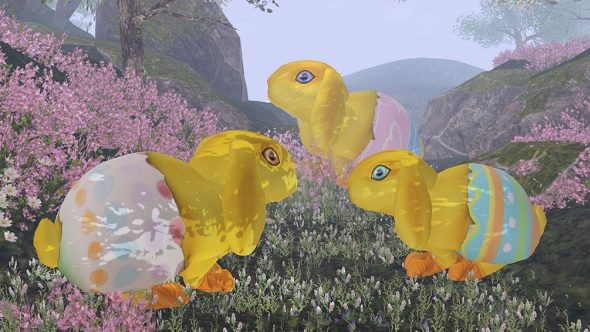 Well, this is certainly cheery news to start the weekend with. Thousands of virtual rabbits in Second Life are going to die of starvation today, as their digital food supply has been taken offline.

In Second Life, there is a massive market for “breedable” objects. As the name suggests, these are digital objects in the shape of cats, dogs, rabbits, plants and even dragons which can be raised and bred by Second Life users. Much like pulling a rare character skin in Overwatch, Second Life players buy these breedables in special blind packs, with the hope that they will get a super rare rabbit for example.

What’s different from items you get from a standard loot box, is that you can breed these objects together with others to create more for resale. Players can essentially turn themselves into digital animal breeders, by collecting rare breedables and then selling them off to fellow enthusiasts.

There is a catch with digital animals though, as the majority of them require feeding in order to stay alive. This requires players to buy special DRM-protected food bags which are usually sold by the creator of these virtual pets. The only downside is that if there is no server to validate your digital bag of food, your precious sweater-wearing rabbit is going to starve to death.

Well, this is the fate that is going to befall much of Second Life’s rabbit population as the digital pet company Ozimals recently received a cease and desist letter, forcing them to remove all of their goods from the Second Life marketplace. With all items (including pet food) being removed from the marketplace back on Wednesday, today is when most digital rabbits would be getting their weekend feed. Unfortunately, that meal will never come.

Some rabbits will escape this plague of starvation, as Second Life players could essentially make their animals immortal for a small fee. While this came at the cost of sterilising their favourite rabbit, it meant they would live without the need for a feed. It is these few rabbits that will tell the tale of this great famine.

This is not the first time that there has been mass animal deaths in Second Life though, as Ozimals had to pull the plug on a brand of digital birds called Pufflings. Luckily, the Pufflings enjoyed a swift death as they simply all disappeared once their server went offline.

As for the reason for why Ozimals have shut down, details are pretty messy. A public letter has been posted online by the parties that filed the cease and desist, a “Edward Distelhurst and Akimeta Ltd”, which explains their reasoning for going after the company. It’s quite the tale, but the basic gist is that Ozimals was actually dissolved as a company back in September of last year, but they continued to use expired product licences to sell their digital pets.

While the legal proceedings will no doubt be ongoing, just spare a thought for all the poor bunnies that will never wake up today.

Thanks Waypoint and Rock Paper Shotgun.