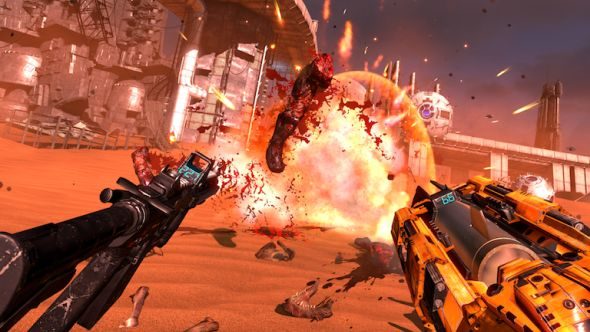 If you too wish to be like our Matt above and kill half-naked harpies and walking blood clots with a minigun, Devolver Digital and Croteam have the news for you. Serious Sam VR, subtitled The Last Hope, will be available on Steam in an Early Access form from October 14 – that’s the Friday after next. It will let you defend various monuments from around the galaxy and shoot aliens with massive guns in an attempt to defend mankind. It will probably make you feel, as we can all tell Matt was, hardcore as hell.

How will it fare on our list of the greatest VR games?

It’ll be full price at £39.99 / $59.99, so I’d expect it to be fully featured. Croteam promise multiple missions to select from, powerups to manage mid-combat and a skill tree to let you choose expertise. There’s different types of weapon too, not just the minigun seen above. While there’s an in-game currency, it’s said that there will never be a microtransaction system.

According to the Steam page, they’re planning to spend six months in early access. Your average delay will put that to somewhere midway through next year for a full release. It also says the price will be going up during development, so it’s possible the price point we were told above is the final, not launch, or that plan has been abandoned.