The direction of Lara Croft’s new adventure is spelled out in the title. Much like how Rise of the Tomb Raider signalled Lara’s ascent from shipwrecked survivor to athletic archaeologist, Shadow of the Tomb Raider tells us that this will be her darkest, most predatory hour. It’s a classic arc for many characters, but Lara’s new path appears to be a strong interpretation.

Could Shadow of the Tomb Raider join our list of the best PC games?

Her descent begins in Mexico, in which a mission played by press at the game’s world premiere introduces the series’ latest threat: the Mayan apocalypse. Lara’s inquisitiveness has led both her and the insidious Trinity organisation to Central America, where both parties hope to secure an ancient key. 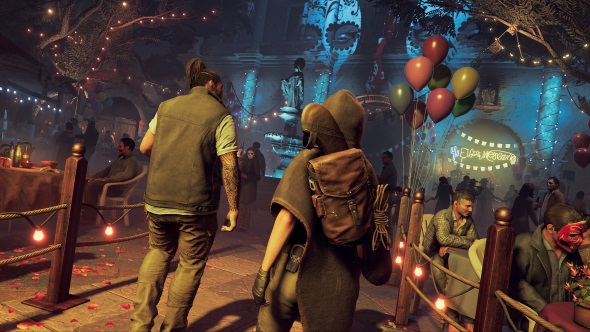 As the mission opens, Lara and Jonah are trailing the Trinity agent through the streets of Cozumel, a town celebrating the Day of the Dead. Sugar skulls and colourful flowers decorate the night streets while crowds chatter and sing. It’s a very different world for Tomb Raider, a series that has thrived on isolating its central characters in hostile environments. These heavily populated Mexican streets feel like a real change of pace, although admittedly that’s partly due to this being a slow follow-the-target and push-aside-crowds segment.

Fortunately, this streetside stalk doesn’t outlive its welcome, and Lara is soon descending into the ruins of Mayan civilisation. Where in previous games she’d have scrambled, the animations in Shadow of the Tomb Raider really emphasise Lara’s progression: she’s entirely confident in each strike of her climbing axe, her notably more muscular frame crawling across rock faces with ease. The approach to the first tomb introduces the new ability to anchor your axes and then rappel down from them, almost Mission: Impossible style, but aside from that it’s Tomb Raider as usual. 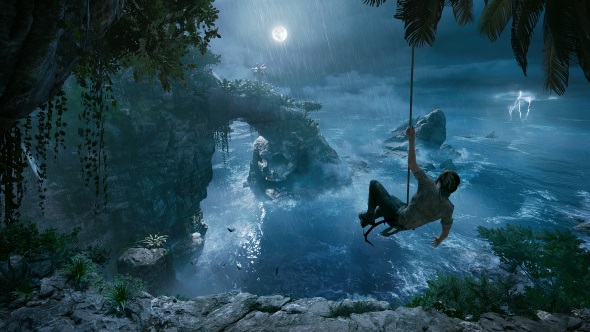 And that is, largely, the picture provided by the game’s first 45-minute demonstration: more of the same, albeit with welcome additions. As Lara enters the tomb she discovers that there are huge, flooded chambers, which demand that she takes up a little diving. Underwater exploration is entirely what you’d expect, although no-one can deny how striking the environments look, especially when it comes to light sources diffusing through the water. Graphical powerhouse games seem largely reserved for Sony-financed PlayStation 4 exclusives these days, but with Tomb Raider we still have a PC triple-A adventure reaching for that standard.

This first tomb’s challenges are relatively straightforward, based around a variety of weighted cages that must be altered in order to ascend to the prize: the dagger-shaped key which Lara and Trinity so desperately want. And while the journey towards it may have easily been taken from either of the previous two games, it’s when Lara has this macguffin in her grasp that the situation becomes far more interesting.

Confronted by Trinity’s leader, Dominguez, Lara is commanded to relinquish the key along with a box. While Lara certainly has the key, there is definitely no box, and this revelation is cause for panic. It appears that these items are representative of Mayan gods – potentially Ix Chel and Chac Chel, if my basic knowledge of the civilisation is right – and should you take just one component of the pair from its resting place… well, you’ve just summoned the Mayan apocalypse. 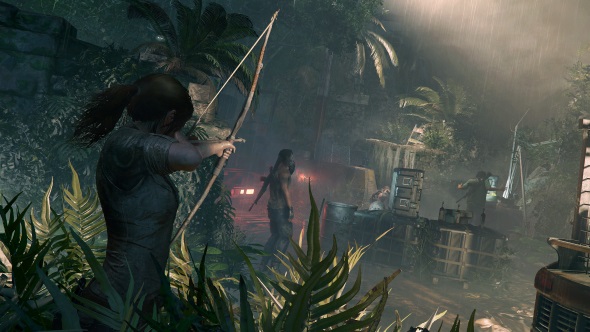 It’s a fascinating beat for Lara’s character. She’s become so obsessed with treasure hunting and outmanoeuvring her opponents that she’s resorted to haste. Her race against Trinity has caused her to lose sight of what makes her career important – knowledge – and instead focus on mere possession. We all have character flaws, but it’s rare that our flaws bring around the end of the world.

Returning to the town, the mission opens up into a combat encounter that demonstrates Lara’s expanded fighting technique. Stealth has always been something the series has aimed to succeed at, but its victories in that have never been a core strength. As the title Shadow of the Tomb Raider suggests, this time around Lara has mastered the art of striking from the darkness. Thanks to the Central American setting, which promises full jungle locales, many surfaces are crawling with undergrowth and vines. Lara can sink herself into these so that she is invisible to her enemies. It’s a simple, effective mechanic that, while not radically changing the pace of Tomb Raider’s punchy, gritty combat, does fulfil the fantasy of Lara becoming a ruthless, predatory adventurer.

The gang of heavily armoured Trinity operatives are the last of Lara’s worries though; just as prophesied, the apocalypse begins to stir into motion. A tsunami cascades through the town, obliterating houses and whisking Lara into one of the series’ trademark set-pieces. Despite the familiarity, it’s a harrowing moment: the sight of so many lives being destroyed in scenes that we’re used to in charity commercials and news bulletins feels a world away from the more pulpy adventures Lara typically engages in. Tomb Raider’s isolation generally prevents it from causing catastrophic collateral damage, but as Lara fails to save a stranded child from falling into the watery abyss, the toll of her mistake really comes to light. 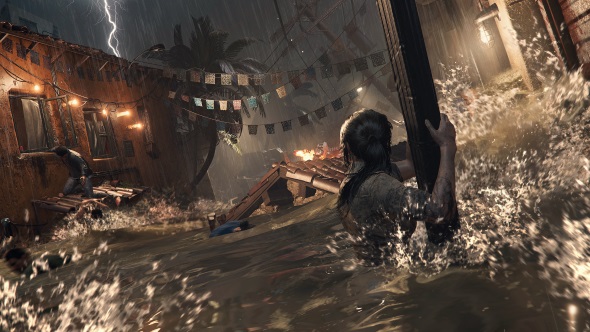 The chapter concludes with Lara being reunited with Jonah, to whom she tells of how she must be the one to reverse what is happening – how she is the only one who can. Jonah’s response is surprising: rather than nodding in agreement and running away with her to save the day once more, he chastises her about her need to be the centre of the action. It’s in this moment that Lara’s newfound flaws are really laid bare, as her closest friends have witnessed the development of her new messiah complex and are calling her out on it. It’s a strong story beat, one that’s more engaging than anything that Rise of the Tomb Raider provided, and something that promises a fascinating arc for Lara over the course of her new journey.

Shadow of the Tomb Raider reminds me of Batman: Arkham Origins, in that, rather than being an evolution of what the series can be, it appears to be an iterative improvement on its predecessor, offering the same style of play but bolstered with a few smart mechanical additions. While that gameplay may not surprise and delight as effortlessly as it once did, Lara still does, and it’s her character development that promises to provide the real pull for Shadow of the Tomb Raider. Come for the predatory stealth and underwater struggles, but stay to witness Lara find her way out from the shadows and into the light once more.