If you ignore the darkness the title alludes to, there are two significant silhouettes cast over Shadow of the Tomb Raider. The third game in the rebooted trilogy carries the responsibility of completing Lara Croft’s transformation from university graduate to fully-fledged archaeological superhero, and it must do this under the guidance of a new development studio.

Eidos Montreal has contributed elements to the previous Tomb Raider games but this is the first time the studio has had total command of Lara’s adventures – and it comes just as her most important hour begins. As such, it won’t be a surprise that Shadow of the Tomb Raider isn’t the most accomplished entry in the trilogy. However, the developer’s catalogue of systems-driven games makes for an iterative sequel that thrives on its new mechanical strengths.

Shadow of the Tomb Raider re-introduces us to a more aggressive, reckless version of gaming’s most iconic archaeologist. After discovering that the shadowy Trinity corporation was responsible for her father’s ‘suicide’ in the final moments of Rise of the Tomb Raider, Lara Croft is doing everything she can to stay two steps ahead of them. Her desperation to outpace and eliminate her militaristic rival leads to her abandoning some of her more admirable qualities – preparation, precision, and generally being cautious. This results in Lara literally summoning the Mayan apocalypse after she seizes an artefact without first researching its properties. With a series of catastrophic natural disasters set in motion, it’s down to Lara to fix her own mess, and save both the world and herself.

This opening promises a fascinating angle: a psychological evaluation of Lara, and the toll that becoming the Tomb Raider has taken on her. Alas, Eidos Montreal fails to deliver, quickly pivoting back to a far more mellow Lara in the aftermath of the first disaster. While the very title of the game suggests that the story will examine both the light and dark of Lara’s character, neither side is painted in bold enough colours to make a strong statement. By the end of the story, it’s difficult to ascertain what Lara has learnt, both about the world and herself, which in turn means you learn little about her. She feels no stronger nor more confident than her portrayal in Rise of the Tomb Raider, bringing into question this story’s position as the final part of her origin trilogy.

Eidos Monreal attempts to examine the light and dark of Lara’s character, but neither side makes a strong statement

While Eidos Montreal has stumbled with its handling of Lara the attempt does have flashes of brilliance. A late-game segment allows Lara’s meaner side to surface, brought to life via a superb transition from cutscene to gameplay that channels her anger through you. After a brutal few minutes, the segment concludes with a bloody Lara breaking down in tears, emphasising her human qualities and the stress that comes with dealing with such a catastrophe. If only the entire narrative were so strong, Shadow of the Tomb Raider could well have been Lara’s finest hours.

The journey to prevent the end of everything takes Lara to Paititi, the legendary lost Incan city. It’s here that Eidos Montreal’s previous experience with Deus Ex shines through, as the city acts as the key hubzone from which all your excursions will begin. You repeatedly return here after completing main missions in the jungle’s depths, which provides regular opportunities to aid the local community with their problems.

Paititi’s key struggle is with the Cult of Kukulkan: a sect that’s attempting to seize control of the city from its rightful ruler, Unuratu, and who is chasing the same Mayan artefacts as Lara in its hunt for control. But, beyond this major goal, numerous people in the hidden city’s community require help with their day-to-day struggles. Each return visit to Paititi opens up new side-quests, which send Lara through crypts to bring back ceremonial items, have her aid children in their treasure hunting ambitions, and even solve the city’s latest murder.

You can swap Lara's outfit at any of the campfires littered throughout the world. Many of her wardrobe options are taken directly from past Tomb Raider games, including Lara's original shorts and tank top from the Core Design days. These outfits render her in a period-authentic polygon count, too.

These side-quests offer more to do around the main story but typically suffer from tired design. Despite this, each gives you a reason to further explore Paititi, which is an undeniably beautiful and impressive place. While the 2013 reboot and Rise of the Tomb Raider both had small populations to interact with, exploring their hub zones was largely a solitary experience: they were about Lara learning her limits on her own. Paititi is teeming with life and so it makes for a very different atmosphere. As suited as Lara is to the quiet reflection offered by the wilderness, it’s a pleasant change to have her spend so much time with others, especially as she so often encroaches on lost civilisations as she searches for their hidden treasures. This time around she gets closer to and gets to know the people that belong to the land, history, and culture that she blunders through.

But for all the positives of Paititi, there’s one deeply unfortunate misstep: the core story becomes one of the white saviour. It’s down to Lara to save the people of Paititi from the shadowy cult that has infected them. While Unuratu is shown to be a strong leader, the story makes it clear that she needs Lara’s help, and much of the town looks towards their new outsider for aid. As Lara dons the traditional dress of the Patiti culture, rallying against the cult, it’s hard to avoid the feeling that this kind of story is one from a less enlightened age. 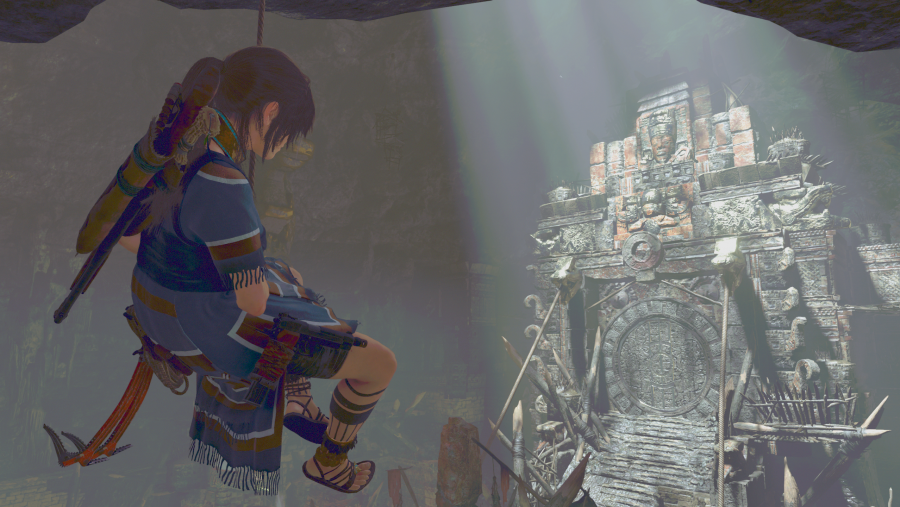 Where Shadow of the Tomb Raider does excel in evolving Lara is in the combat. She genuinely feels like a deadly predator as she prowls among the Peruvian jungle due to the experience with stealth that Eidos Montreal brings over from the Deus Ex series. In the previous games, combat scenarios began in stealth but making too much noise instantly turned the encounter into an inescapable bloodbath. But Shadow of the Tomb Raider lets you break away from enemy sightlines and return into hiding so that being sneaky is just as viable as solving each conflict with frantic gunplay.

It helps that Lara now has a proper arsenal of stealth options: she can coat herself in mud to reduce the chance of being spotted, hide in vines and undergrowth for ambushes, and even hang enemies from tall trees with ropes. Dead bodies can be booby trapped and poison clouds deployed via specially crafted arrows. This makes each encounter feel like a puzzle to solve and lends itself to an experience that’s a far cry from the tireless chorus of AK-47 rattles of the first game.

In fact, combat is noticeably cut back in favour of exploration across the whole game, which is fortunate as Shadow of the Tomb Raider boasts the series’s tightest traversal system to date. Many areas demand you to chain together Lara’s movement skills in quick succession: use the climbing axes to scale a wall, descend from an anchor point with the new rappel-line, swing across a ravine, and then grapple hook for the final leap. This generation’s Lara is not the acrobatic, backflip-and-cartwheel athlete of yesteryear, but her current movement set feels suitably energetic for these grittier times. 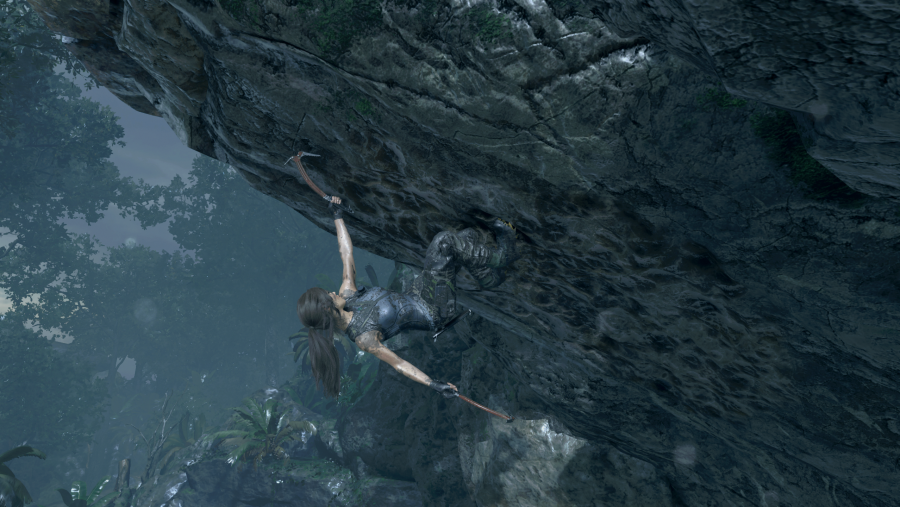 Tombs form the game’s most memorable moments, such as a fantastic hidden Spanish galleon

While this is the case, Lara’s refined climbing abilities are held back from being first class by the restrictive level design. The game introduces climbing crampons that allow Lara to scale the underside of horizontal ledges for some upside-down antics worthy of Mission: Impossible, but by the time they’re introduced there’s not much of the game left. But their inclusion makes it increasingly obvious that, while Lara has so many movement options, the linear paths available to her means you’re unable to make any interesting choices with them. It would have been great to have a myriad of routes to take that each utilise different aspects of the climbing kit.

This shift away from firefights makes Shadow of the Tomb Raider the most balanced of this new trilogy, refining each component of the two previous games, and for that Eidos Montreal should be commended. Where there is room for improvement, however, is in the tombs. These form the game’s most memorable moments, with a hidden spanish galleon being a personal highlight, but there’s also fun to be had with spinning death machines and light reflection puzzles. The disappointment is that none of the tombs are particularly fiendish, with some straight up using ideas as old as the Tomb Raider series itself, while more advanced challenges are beaten with nothing more than logical timing tricks.

If you are finding Shadow of the Tomb Raider easy – or, likewise, too hard – you can shake it up using the modular difficulty setting. This is probably the game’s best innovation as it lets you individually tweak the challenge posed by its three central elements: combat, traversal, and puzzles. Hints in the world can be added or removed and AI dumbed down a little to make your experience more enjoyable. While there’s clearly problems with traversal largely being a single-route journey, turning off the white paint marks that signpost the way does at least turn a cliff climb into a bonafide puzzle to be cracked. It’s a system that works both for accessibility and challenge, and you can almost certainly expect to see more games adopt this approach in the coming years. 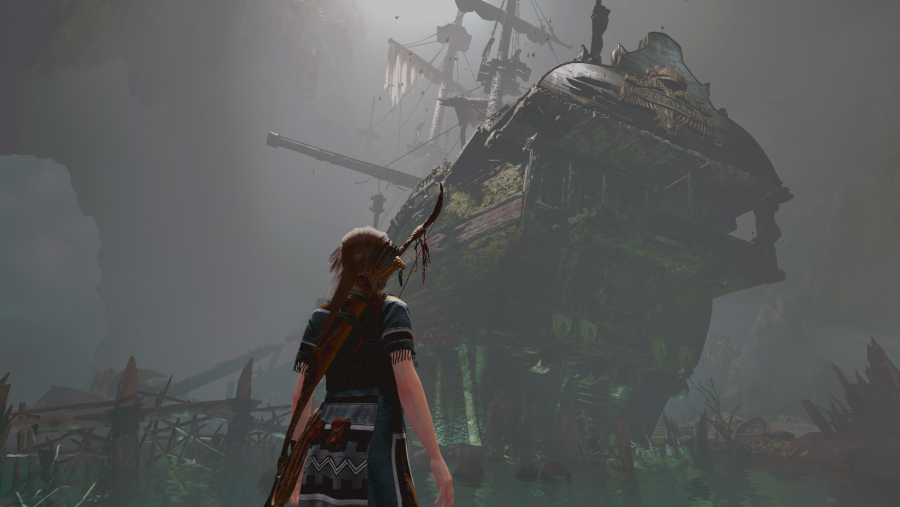 What the modular difficulty options do, however, is show up the moving parts that drive Shadow of the Tomb Raider. Unfortunately, they’re a little rough, like the gears of one of the ancient, ramshackle machines Lara operates – grinding against each other to produce an undesirable friction. It’s an impressive game in the moment but it’s easy to imagine how much more of a success it could be if it all fit together properly. Eidos Montreal has brought its signature approach to interlocking gameplay systems rather than Crystal Dynamics’ focus on roller coaster set-pieces to Lara’s world, but isn’t bold enough to provide a more intelligent plot that properly explores Lara’s psyche.

This may have been forgivable in other circumstances but given that this is the game where Lara’s transformation into the Tomb Raider is supposed to conclude it’s lacking. Lara’s personal progression is so slight that it’s hard not to feel that there’s more development to come, or perhaps, as Crystal Dynamics made obvious in Rise of the Tomb Raider, Lara’s been who she needed to be for two whole games now.

Shadow of the Tomb Raider

Eidos Montreal applies its signature gameplay touches to Tomb Raider, making for the series' most satisfying balance of combat, exploration, and puzzle solving. Unfortunately these mechanical successes are let down by a journey that fails to deliver a compelling study of Lara's personal shadows.