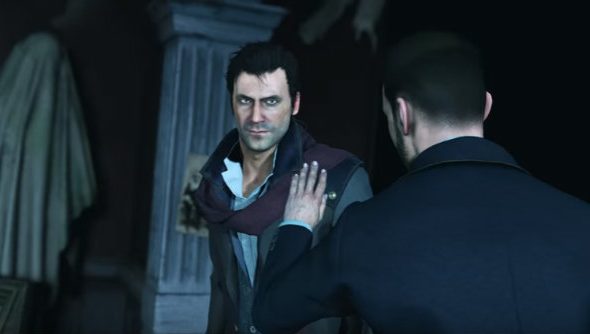 Watson has dropped about ten years in age, and Sherlock has morphed into Mad Men’s Jon Hamm, but that’s not all that’s new with the sequel to Sherlock Holmes: Crimes and Punishments.

Holmes never goes far without Watson, and you can enjoy similar camaraderie in our list of PC’s best co-op games.

The first thing that struck me in the new gameplay video for Sherlock Holmes: The Devil’s Daughter – aside from the Jon Hamminess of Holmes – was how you can actually open the door to Sherlock’s apartment and walk down the stairs, right onto the cobbles of Baker Street. It’s nice to not be met with a loading screen every time you see a door.

Another big change was the ability to make deductions when studying someone. In the previous game you would make observations about a person and that would feed into the investigation, but here those observations are met with multiple options where you must deduce what it means. Baggy eyes? Maybe they’ve had a night on the booze, they could well be ill, or perhaps they’re just tired.

These choices will affect the options available during conversation – and in the spirit of the last game, it’s completely possible to balls it up.

Not so great was an eavesdropping sequence controlled by a minigame that wouldn’t be out of place when recovering from a knockdown in a boxing sim. And don’t even get me started on the trailing sequence where you control Wiggins the street urchin. Listen, games developers: the Assassin’s Creed games have given us enough trailing sequences for a lifetime.

See the opening mission in action below and try not to be annoyed by how the narrator says Bigben Interactive: