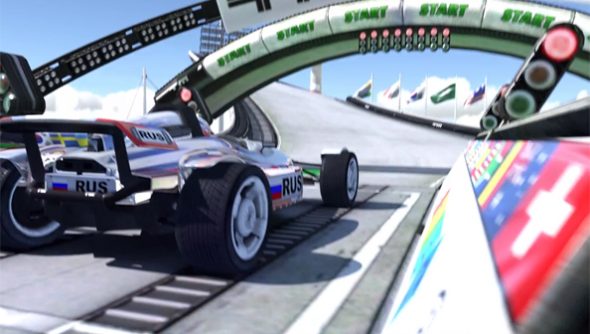 Nadeo’s ManiaPlanet titles are on the verge of a Steam release, the good people at Steam Apps Database have discovered. Standing stage right before the curtain’s hitched up are minimalist multiplayer FPS number Shootmania Storm and the free to play component of racing sequel Trackmania 2, Stadium.

Update: Official word from Ubisoft is that Trackmania 2: Canyon is now available to buy on Steam, while the open betas for both Shootmania Storm and Trackmania 2: Stadium can now be accessed via Valve’s platform.

Both ShootMania Storm and TrackMania 2: Stadium are available to pre-order with a 10% discount while their respective betas are ongoing. What’s more, say Nadeo, if you’re a previous buyer of either Shootmania Storm or Trackmania 2: Canyon you’ll be able to redeem your key on Steam.

Entries forbothgamespopped up in Steam’s database in the last 24 hours. Until now, both series have lived exclusively onNadeo’s custom-built ManiaPlanet platform.

“This partnership with Steam’s worldwide publishing platform allows us to introduce ShootMania Storm and all of the ManiaPlanet games and services to an even wider audience of PC gamers in the world,” said Nadeo publishing director Anne Blondel-Jouin in a statement. “As a matter of fact, it is key to us that as many players as possible join the actual growing community so that everybody gets maximum fun with the game.”


“Through Steam, we’ll make “competition for everyone” a dream come true for more gamers and map-and-mod makers who all create the user-generated content and activity that make ShootMania Storm so attractive and innovative on the FPS PC competitive field,” she added.

Trackmania 2: Stadium will reintroduce Trackmania Nations’ much-loved Stadium environment as the centrepiece of its free to play version. It will be one of two expansions (or ‘environments’) released for the game early this year, alongside the upcoming Trackmania 2: Valley.

A PC beta for Shootmania Storm has been underway since February 12th and will keep on burning ‘til the game’s launch. The eSports contender had originally been gunning for a January release date, but has since been delayed until April 10th.

Have you been engaging in Trackmania’s HotWheelian antics over the past half decade? What might a Steam release mean for the series’ dedicated (and very active) community?