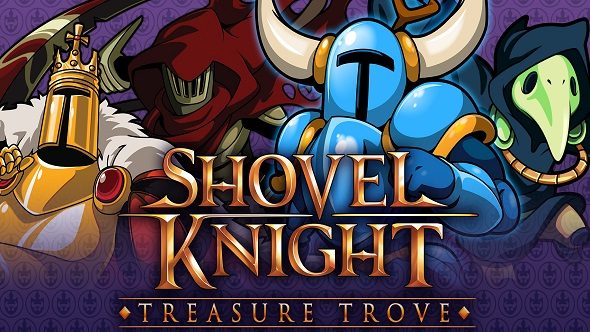 Following its period of timed exclusivity for the Nintendo Switch, both Shovel Knight: Treasure Trove and the prequel, Spectre of Torment are now available for purchase on Steam. If you already own Shovel Knight, your copy should have automatically upgraded to Treasure Trove, adding in the Spectre of Torment campaign alongside a host of new features like Body Swap mode.

For more great indie games, check out our list of the PC’s best indie titles.

Specter of Torment is a special prequel quest for Shovel Knight, promised as one of the knight campaign stretch goals from the original Kickstarter. Following the ghostly Spectre Knight, this campaign sheds on light on how the Order of No Quarter was formed, as well as providing some backstory for both Spectre Knight and the evil Enchantress. Spectre Knight is a more acrobatic fighter than either Shovel or Plague Knight, being able to run and jump off walls, as well as dash through enemies using his scythe. All of the main levels have been reworked to suit Spectre Knight’s wall-jumps and flips, with each level also receiving remixed music for your listening pleasure.

There is still one new campaign to be added, centered around the golden King Knight, along with Battle Mode which was previously exclusive to the 3DS version of Shovel Knight. As long as you own a copy of Treasure Trove, you should receive these extra modes when they launch sometime in the near future.

To reflect the addition of both Plague of Shadows and Specter of Torment, Shovel Knight: Treasure Trove has received a slight price increase compared to the original game, now going for $24.99/£18.99 on Steam. If you want to just try out Specter Knight’s campaign, Specter of Torment is available as a standalone game for $9.99/£6.99.