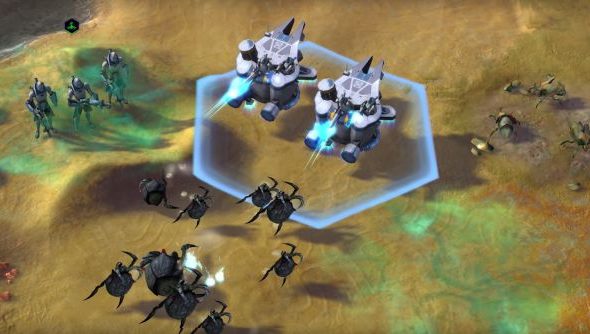 The latest Rising Tide featurette has been released, this time highlighting the capability in the new Beyond Earth expansion to combine the powers of two of the until-now opposed affinities into new combinations. So the technology-loving Supremacy affinity may be merged with the alien-splicing Harmony to create super powered robo-aliens with advanced technology. Equally, Supremacy-Purity means being a big, industrial, slightly racist super power. All is revealed in the video below.

My hopes for Rising Tide are almost as high as they were for the ultimately disappointing Beyond Earth in the first place. Expansions have done incredible games to Civ games in recent memory, particularly Civ 5’s pair of big changers in Gods & Kings and Brave New World. Big Civ fans tell me that with and without is akin to entirely different games there, and hopefully Rising Tide is the start of that for BE.

It’s not that BE was especially bad, I just found it dull. Too close to the Civ formula, without the grand amount of history to back it up. Too simple and lacking in the complex, deep and fun systems that I go to a 4X for. Though I spent roughly the same amount of time with both, Endless Legend proved much more entertaining in the same sphere last year, and I expect the upcoming Endless Space 2 will redouble that quality once again, as Legend did over the original Space.

It’s been a long time since Civ has been the only option or even the best one in the genre and there’s now serious competition from all sides. Hopefully Rising Tide can deliver big things when it comes out on October 9th.