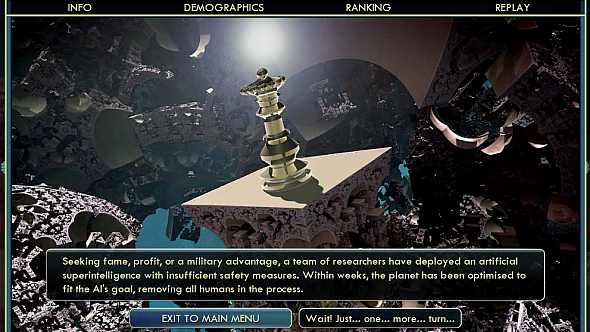 Plan for global annihilation in the best strategy games on PC.

The mod is called Superintelligence, and it adds a number of new techs concerning the development of artificial intelligence. These have several outcomes: either you or a rival player controls AI and achieves what looks like a modified Science victory, or too much uncontrolled research unleashes a rogue superintelligence that destroys humanity.

New techs include Deep Blue, Machine Learning, and the Orthogonality Thesis, which states that AIs can have any combination of intelligence and goal, in contrast to the view that they will converge to a single common goal because of their intelligence.

The mod was made by developer Shai Shapiraunder the sponsorship ofJaan Tallinn and Dr Shahar Avin of the CSER. Speaking with RPS, Dr Avin says:

“We want to let players experience the complex tensions and difficult decisions that the path to superintelligent AI would generate. Games are an excellent way to deliver a complex message to a wide audience. The Civilization series has an amazing track record of presenting very complex and interlocking systems in a fun and educating way, including major risk issues such as nuclear war and global warming.”

You can grab the Superintelligence mod on Steam here.