Sid Meier’s unique strategy cocktail in games like Civilization is something to be savoured; an epic to be chiseled over many weeks, spending each evening honing a few moves to perfection. Don’t rush it. Take your time, and victory will be yours.

But what if you want that signature blend of diplomacy, expansion, and war, but all crammed into a quick afternoon session? You play Sid Meier’s latest: Starships. As the captain of a starfleet, you’ll lead your ships on a swift adventure across the cosmos, seizing planets, waging war, and building wonders. It’s got that classic Civilization feel, but compressed into a bite-size asteroid of space domination. 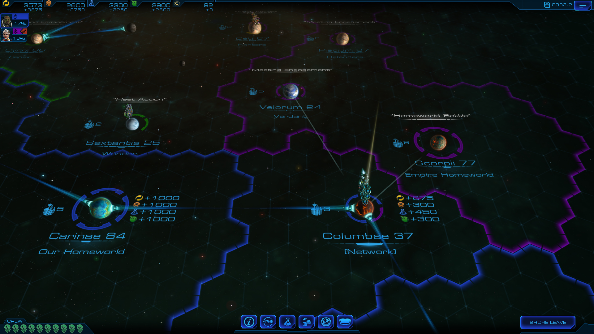 There’s a variety of player options when setting up a campaign: the size of the galaxy, the number of competing AI captains, and the win conditions. The key goal in victory is to expand to the point of owning 51% of the map, but you can set other conditions to ensure a quicker victory, such as possessing seven wonders. These options are vital in dictating what kind of game you want from Starships: a swift hour-long round of domination, or a few days of steady considered strategy.

The game is broadly split into two sections: turn-based combat scenarios and empire expansion over the galaxy map. Expanding your empire requires aggression. The game supports diplomacy, but it’s a weakened form compared to Firaxis’ other games, with little more than basic peace treaties. But that’s no problem, as the hardline route is great. You’ll guide your Battlestar Galactica-like fleet of ships from planet to planet, completing missions at each. Succeeding at a mission gains you influence over the planet. Build the influence of the planet up through its four levels to 100% and it’s yours, and will contribute resources to your fleet.

With resources you can build new structures on planets to help increase efficiency, and research technologies on a basic tech tree that contribute stat boosts to your fleet. The fleet itself is a perpetual feature of the game; a collection of ships that you build yourself and are the warriors in every battle you fight. As you spend money on them, you’ll see them grow and evolve as new cannons and armour plates are bolted on. This adds a uniqueness to each ship you craft; their design is entirely yours to dictate. It’s sensible to build each of your ships in different configurations – a close range barge, a long range dreadnaught – but there’s nothing stopping you from just spending more money on ships to make them a gigantic jack of all trades. 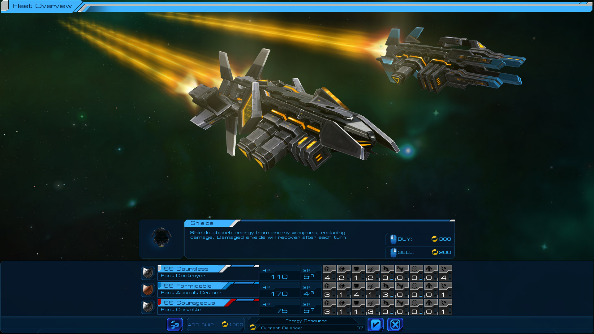 Your fleet will visit planets that offer up a random mission for your ships to engage in, which take place on a zoomed-in, chess-like playing field. There’s a variety of mission types, including requiring you to stop enemy vessels escaping, capture a collection of beacons, or survive for a set amount of turns before your shields recharge. The mix of missions is solid and each demands a relatively different strategy, but before you finish even the shortest of campaigns you’ll have replayed each missions several times too many.

Combat is turned based and feels like a stripped-back XCOM. Ships can move and fire each turn, and have access to a variety of abilities depending on what systems you’ve upgraded. Scans can reveal hidden units, and fighter bays can be opened to deploy X-Wing like combat ships that then act as their own independant unit. Then there’s torpedoes, which take multiple turns to travel over the map, and as such require distinct forward planning to make use of. This adds a brilliant level of variety, making the combat feel the most distinctly satisfying element of the game’s overall strategy offering. Enemies have access to the same equipment, so you’ll want to score critical hits to take out their best weapons. But whilst having depth, the combat is notably simple. Asteroids cause line-of-sight issues, but you’ll be able to fire through friendly ships no problem. Movement is on a 2D plane, and your ships will glide aside for other moving vessels, so you can’t accidentally pen-in a ship. It keeps things clean and easy, allowing you to focus on your tactics and ensuring the satisfaction of successful moves take precedence.

You can perform multiple missions per turn on the galaxy map, but you can’t keep battling forever. As you play your crew will become fatigued. Each jump between planets you make on the galaxy map will reduce your crew’s efficiency, and heading into battle will whittle it down even more. Ending the turn will send your crew on ‘Shore Leave’, regenerating them and fixing up your fleet. What this means is that each turn requires thought on how effectively you use your crew’s efficiency: fight your toughest battles first with an effective crew to ensure big damage, or use a fatigued crew later in the turn, but in ships that have been upgraded thanks to rewards from easier missions. It’s another simple system, but it ensures that the galaxy map has as much tactical depth as the combat. 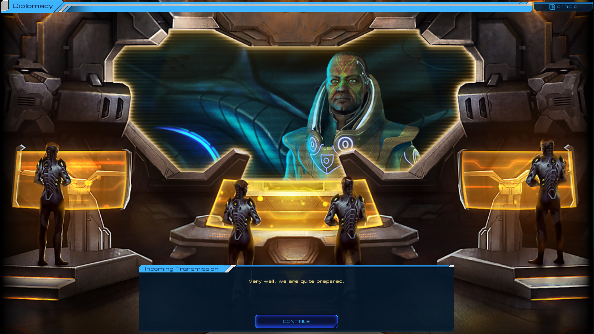 Starships is a tiny game. It’ll take up barely more than half a gigabyte on your hard drive, and its presentation is exceptionally simple. The hexagonal board of the galaxy map is drawn in simple coloured boundaries and a static star-studded backdrop. Outside of combat much of the game is mostly artwork with text overlayed. There’s not even any graphics options on the main menu, and things start to look a little messy on bigger monitors. During battle, the chunky starships that you’ll be guiding around are flatly textured and fire lasers that lack sparkle. Exploding ships don’t so much as splinter apart but simply disappear from the map. It’s all clearly a hang-over from Starships being an iOS game. Performance is limited to the horsepower of an iPad, and it really does show.

Starships may not be a grand epic like Civilization, but its stripped back design fulfils a purpose. If you normally struggle with the multiple complexities of a 4x strategy game, Starships is a great introduction to the genre. It even offers step-by-step advice at every point if you need it. But for anyone more advanced than total rookie, after a handful of campaigns you’ll have seen everything Starships has to offer. Without the usual 4x depth or any multiplayer, Starships lacks the level of replayability. Even though it’s priced accordingly, that’s still its open exhaust hatch. A couple of afternoons after buying, Starships is likely to be lost among the debris of your unplayed Steam collection.