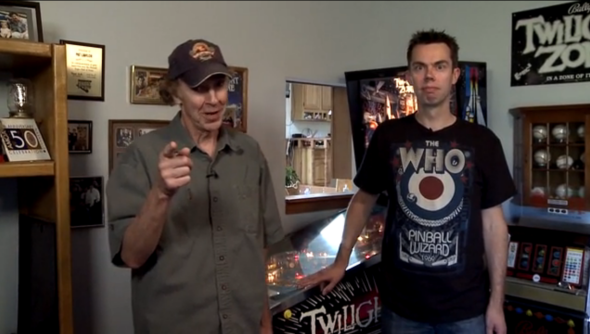 Those of you old enough to recall the Pro Pinball games of the late nineties will likely remember them as cast-iron classics, arguably the best pinball simulators gaming has ever seen. After more than a decade, series creator Adrian Barritt wants to revive the series by way of a $400,000 Kickstarter project that will employ the talents of Pat Lawlor, creator of some of the world’s most successful real-life pinball machines. We asked them how and why they got the ball rolling.

But first! You should definitely check out their Kickstarter pitch, if only to see how Silverball “acquired” the rights to the series, and to hear Lawlor explain how the project allows them to “Explore design possibilities that would be economically impossible in a standard pinball machine,” which is another way of saying that they can make amazing virtual pinball machines that we’ll never see in the real world. If you want to give them your cash, head this way.

Adrian, why has it been so long since we last saw Pro Pinball?

To begin with, we’ve been very busy with many other projects. But the dawn of the iPhone and in particular the iPad really got us thinking. We’d been thinking the Pro Pinball games could look amazing on the iPad for a while. This, coupled with the steady stream of fans asking when are we going to port Pro Pinball over to iOS pushed us to the decision to revive the series. We then had the task of getting the rights back, and now we are there, and very excited at the prospect of breathing new life into these hugely popular games.

Why have you chosen Kickstarter to fund the project?

Kickstarter will let us keep control and continue the no-compromise approach we had back in the nineties. A publishing deal would come with all sorts of strings attached and we’d much prefer to keep control of the project whilst liaising with the fans to make the ultimate pinball game that we and they want to play.

The vast bulk will go on paying staff wages. To bring the project to completion will take a year which, interestingly, is the same amount of time Williams needed when they made real tables back in the nineties. Designing a new table involves a lot of experimentation, tweaking and refining, and with Pat on board we know his perfectionism will mean a perfectly formed game. Also, some of the $400K will go to fulfilling our great Kickstarter rewards, including boxed copies of the game, solid metal Pro Pinball badges, t-shirts and more.

To develop a game to the standard we insist on takes a lot of talented people working hard. But we know, from experience, that the five tables we will produce should we achieve our goal will supersede fans expectations.

What changes will be made to the remastered tables?

We have to recreate the 3D models of the four tables from scratch to take full advantage of the high resolutions which are commonplace these days; including for Retina iPad and Portrait Full HD. On top of that the already genre-topping physics will be made even better. We’ll be adding new sounds and visual effects to ensure the game look, feels and sounds the best it can be. Finally, we will be adding worldwide leaderboards, something we know fans will love, across all the formats. The John Youssi pledge reward is awesome. How did that particular deal come about?

We know, it is amazing! Once we had Pat Lawlor on board, it seemed like a natural choice to try and get John involved too as Pat had collaborated with him so many times before. John is the ultimate pinball artist and a call from Pat explaining the project had him on board too. The idea for the reward – at the $5,000 pledge level you will get a hand drawn portrait of yourself by John that will actually appear on the backglass artwork for the new table – was then devised since, to be honest, we all thought it was the coolest thing ever! If I was pledging that would be the reward I would have my sights set on!

Pat, how long does it take to design, test and complete a pinball table?

It takes between nine months and a year to design a new pinball machine. Much of that process is deciding on the design path, agreeing the design elements that make the table exciting, innovative and fun. The back-and-forth with testing also takes some time, as it needs to be perfect.

And can you describe the design choices behind the new table?

Design choices are made as a result of the theme of the game, the time available, and the natural progression of the design cycle. That is: some things you start with just don’t work out for one reason or another, and they change or are removed, while some things grow and evolve.

We have already started discussing themes for the new table and I have a good number of ideas that I would like to explore if the project is a success. Ultimately, the design choices for me are born out of experience and making sure we create something new, fun and, above all, amazing to play.