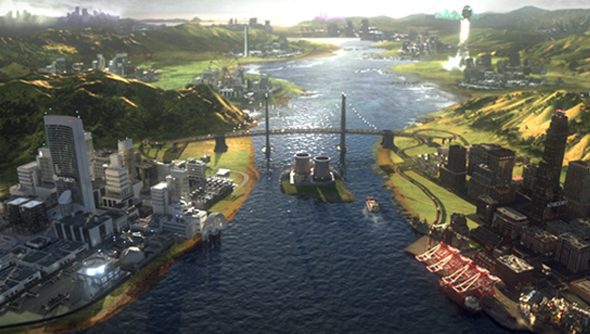 SimCity is online, always – and so must you be, if you want to play it uninterrupted. We’ve known this for some time, but what we haven’t known is why. Luckily, last night’s live-streamed Sim City gameplay demo ended with a fan Q&A in which lead producer Kip Katsarelis justified the game’s multiplayer features.

“We really thought about this SimCity as multiplayer from the ground up. Cities are no longer in a bubble. You can play in a region with other cities, and there’s a lot simulation that’s going on between cities. You can play multiple cities or invite friends into your region and play with others.

“Things like power and water are shared across cities and you can purchase that power. You can share services like fire, education and garbage. You can also gift to one another, so money and resources you can create in your city, and you can also collaborate on great works.

“We have things like international airports that you can work on together and build up, and the airports will actually bring tourists into your region and allow you to ship more freight in and out. There’s just a lot more to do at this macro level of city planning.”

But is it enough that a dropped connection or three can be tolerated? Let us know your thoughts in the comments.

You can watch the whole of Maxis’ SimCity live-streamed gameplay demo back in the cold light of day. I predicted that the whole thing would end with a bang as a city was reduced to dust, and it did – but won’t spoil how.

{"schema":{"page":{"content":{"headline":"Maxis explain why SimCity is always online: \u201cWe really thought about this SimCity as multiplayer from the ground up\u201d","type":"news"},"user":{"loginstatus":false}}}}